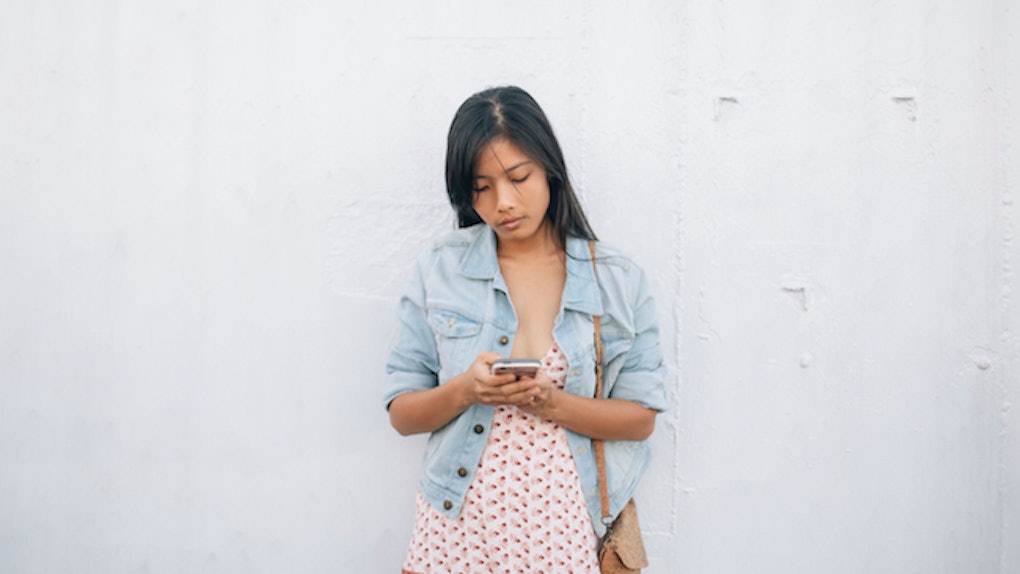 When Should You Delete Tinder After Meeting Someone?

Meeting on Tinder is categorically weird. You have concrete evidence that your Tinder boo was swiping through photos of girls, actively trying to meet people. You both were looking to get after it, whatever "it" might be.

But let's say things are going well with Tinder Boo, and you're slowly cruising into actual relationship territory. When do you delete your dating apps?

If you delete the apps too soon, it can feel like a jinx on your burgeoning relationship. But if you don't delete Tinder and his buddy matches with you... definitely not a great look. (Trust me, I've been there.)

Elite Daily spoke to dating coach and expert Meredith Golden to find out what point in a relationship you should delete Tinder. Here are three things to consider before opening up some GBs of storage on your phone:

Are You In An Actual Relationship?

If the answer is yes, then delete those apps yesterday.

Golden states it plainly: "Once you are in a committed and happy and healthy relationship, it will be obvious. At this point, exit the apps."

It's not a rumble in your tummy, you're actually sick. It's not casual dating, you're calling him your boyfriend. (And the fact that I made food poisoning and relationships analogous probably says a lot about me.)

Forgetting to get off the apps can also lead to relationship drama. I have come across male friends on the apps long after they've gotten into serious relationships. They weren't swiping anymore, but it's sometimes tricky to actually get rid of your profile.

So press down and hold and click "x" right now. Maybe make a thing of it and do it simultaneously with your dude. That's kind of 2017 romantic, right?

Have You Had "The Talk"?

No, I'm not talking about the Ps in Vs talk, but if you are thinking about deleting your apps, don't do it before you're exclusively dating him. (And he's aware of your exclusive status, too.)

Golden explains, "If you met on a dating app and you've entered a committed relationship, deleting the apps should be a given once you're exclusive."

Let's be real though, exclusivity requires a talk. You don't want to see Tinder Boo on Bumble hours before you two meet up for your umpteenth date and go full panic mode and pick a fight with him.

Golden explains that the deleting dating apps conversation can happen in tandem with the exclusive conversation.

Let's say Tinder Boo initiates the conversation about not seeing other people with you. Golden explains that you "can say something along the lines of, 'So, no more swiping for us?' And this can solidify that both are no longer swiping. But the swiping should have stopped long before the exclusive conversation, as long as the relationship is a good one."

Good point. If you are too nervous to have this conversation or he hesitates when you bring up your relationship status? Do like *NSYNC and say bye, bye, bye.

And be glad you didn't delete all of those apps before the talk. You saved yourself a lot of time and data.

Is This Person Worth Deleting The Apps For?

This should be an easy yes. We're not talking about deleting carbs from your diet, we're talking about taking little squares off your phone.

That said, there are plenty of guys it's easy to be infatuated with and even get into relationships with who are always vaguely on the spectrum of shadiness. If you are worried about deleting apps because you suspect he hasn't deleted his, think twice about who you are dating.

Call yourself out. Golden says, "If he is shady, stay on apps until you meet a good guy. Why settle for shady?"

You know you deserve better, so act like it. Un-complicate things for yourself.

If you are seeing someone and wondering whether you should be deleting the apps, you are probably actually wondering if your Tinder Boo is ever going to commit to only you. Ideally, he would make this clear, but sometimes, ladies is pimps too and can ask for what they want.

Rather than continuing to swipe on your cab ride home from his place to comfort yourself and feel protected by all of the options you have out there, put the phone down and have the talk with him.

The years and tears I could've saved myself if I had only grown a pair and asked, "What are we doing?" sooner in past relationships is... a lot.

Sometimes asking the tough question is the best way to protect your heart.