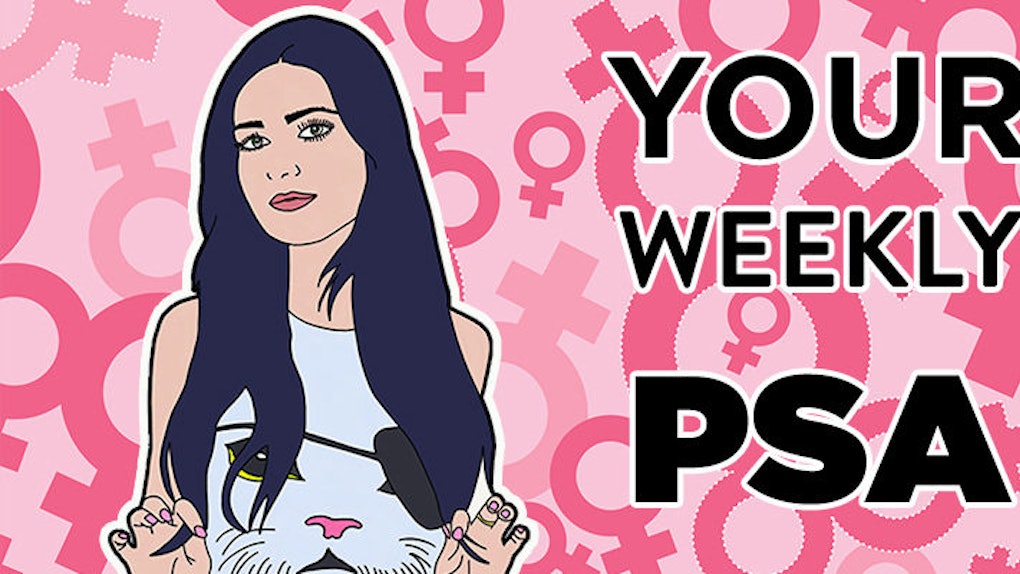 How To Be A Nasty Woman This Weekend

I've never been so full of love and compassion for all of you right now. I'm teeming with such intense feelings, it's hard to sit still.

I'm giving your tight, virtual hugs, and I vow to send you as much energetic light as humanely possible.

But I know that only goes so far. I understand how disempowered and disenfranchised you might feel in this moment.

I understand your heart has been broken by the system, and I passionately believe giving yourself permission to feel the hurt is so, so important.

I passionately believe giving yourself permission to feel the hurt is so, so important.

I'm not going to throw on my self-righteous trucker hat, tie up my steel-toed boots and be that furrowed-browed lesbian who lectures you on trying to make sense of everything right now to create a solid plan of action.

Maybe I'll be that fierce dyke in a few weeks. But maybe not. I'm not there yet.

I think the most powerful thing we queers, minorities, women and pissed-off men (good men, I know you exist and I love you), can do this weekend is just be the nastiest goddamn versions of ourselves.

Seriously, you can be anything and nasty.

I love the way it feels when I twist my lips around the word "nasty." It's fierce as hell. It's anything but pretty, and I'm not into being pretty anymore.

Personally, I know I'm upset and angry, and I don't care to try and force myself to feel any other way. This isn't the America I grew up so fiercely believing in. The wound is too fresh, and it needs some goddamn air.

My mother always taught me the best way to heal the wound is to pour some peroxide right into it. It hurts like hell, but it disinfects. When the peroxide would set in, I would always scream. But I knew it was worth it.

So let's scream right now. Let's rage as the political peroxide pours into our open sores.

If Trump and Pence think a refined, well-spoken, educated woman like Hillary Clinton is a "nasty woman," they ain't seen nothing yet, baby.

That pussy's going to grab back.

If Trump and Pence think Hillary Clinton is a "nasty woman," they ain't seen nothing yet.

If you're queer, now is the time to be the most awesomely queer version of yourself, honey.

Shout your queerness from the rooftops, or drag out if you want. Walk around in hot pink lipstick if you're a dude who's had that impulse bellowing inside of you, but have repressed it as not to make the masses feel uncomfortable.

Screw the masses. They've made you feel uncomfortable by voting for a homophobic sexual predator. (Well, Hillary still won the popular vote, but there was still a massive group of people who turned out to vote for Trump.)

As the great, feminist "riot grrrl" Kathleen Hanna says, "I'm so sorry if I'm alienating some of you. Your fucking culture alienates me."

For years, I've tried to ease mainstream America into my queerness, bit by bit. But screw that, babes! Now, let's take our power back.

For too long, we've accepted sexual harassment our entire lives, being told it's just "locker room talk." That's what all boys do, right?

Let's do everything society has told us "ladies" shouldn't do. Let's refuse to hold back our nastiness. I mean, has Donald Trump ever held back any thought that ever popped into his head? Absolutely not.

Trump and Pence have no problem expressing how they feel about us, our bodies, our sexualities and the colors of our skin, so let's return the favor. Like I said, it can be cathartic to be the nastiest, fiercest version of yourself — whatever "nasty" means to you.

That's another beauty in the word "nasty." We can define it for ourselves.

Let's take our power back.

If you're a woman, and you're beyond hurt that the face of our country is a sexual predator who wants to inflict his laws all over your body, talk about it loudly at the bar this weekend.

Or, make out with someone of the same gender in front of everyone. Talk about sex loudly and honestly.

Personally, I just want to paint a giant, colorful rainbow across my forehead and shamelessly say the word "dyke" as much I possibly can.

Let's also take up as much space as possible at the bar. We are always trying to make ourselves as tiny as possible.

Is this why I developed an eating disorder as a teen that made me so tiny, I practically disappeared? I don't know. But I'm done with being small. I want to be big, loud and nasty.

I'm done with being small. I want to be big, loud and nasty.

We've held our breath, and we've acted like prim ladies for too damn long. And where has it gotten us? It's gotten us to a place where Donald Trump is the president-elect.

But Trump is an enemy to women. And like most enemies to women, he has no idea of the magnitude of a woman's rage! Don't these guys realize we give birth?

If he really thinks a woman challenging him during a debate is as nasty as a woman can go, then he's in for a real treat, right ladies?

So, now, I want you to close your eyes. Really feel the hurt you've experienced in your heart, and let it fester through your body, because stifling your emotions is exactly what the other side has always wanted. Feeling your feelings is political, so do it with full force.

Feeling your feelings is political, so do it with full force.

Channel these feelings into your amazing nastiness. I promise you will feel better. The other day I spoke about my period blood on camera, and I felt liberated and fabulous.

And if you're tempted to stifle your big emotions or if you feel undermined, unseen or unsafe, I understand. But don't let the big boys win by drowning out your voice! Message me if you have to.

Get as nasty as you can, baby. And if you feel alone, imagine me sitting next to you on your couch. I'm taking up a lot of space, and my legs are spread open wide (like annoying manspreaders on the subway).

There are offensive holes in my designer jeans, and I'm burping, eating pizza and talking about sex.

In fact, I'm screaming about sex at the top of my lungs. I'm drinking a beer — even though I hate beer — but a beer feels good right now.

I'm looking into your eyes and telling you it's time you let it all hang out, honey. I'm your lesbian big sister, and I'm telling you to misbehave right now.

So you grab a third slice of pizza, and the grease tastes so damn good. And for a moment, we are united in our nastiness and vow never to be silenced by the boy bullies again.