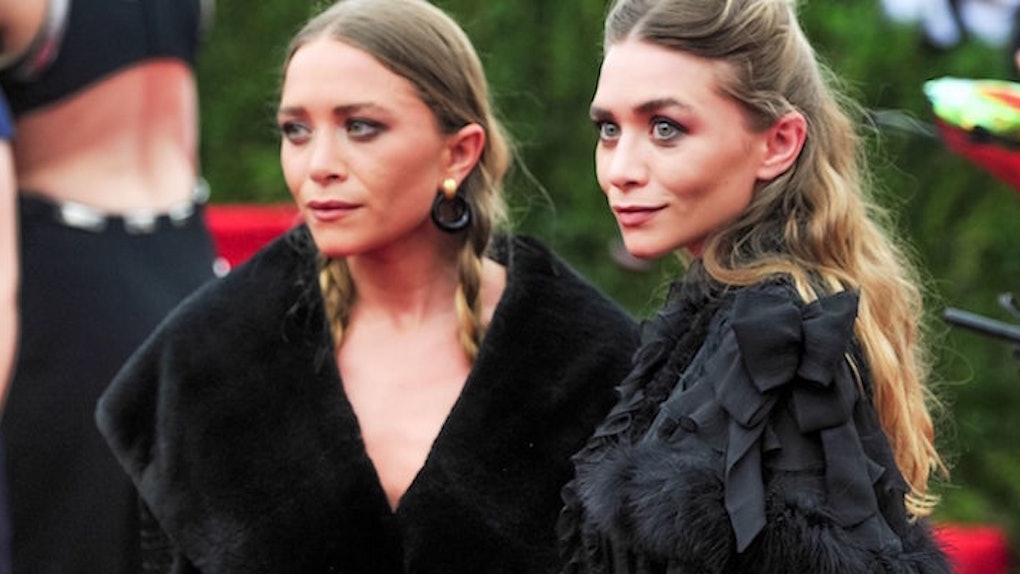 One time I was sitting at a bar on the Upper East Side with my best friend Ruba. She's a total weirdo dresser like me, but for some reason, she was dressed super basic that night — probably because she had just gotten off a cross-continental flight from London. Her airport-casual chic look was a pale denim jacket and no makeup.

I, on the other hand, had done nothing but get ready all day, so I was wearing my fierce black leather jacket, a black fedora and a ton of makeup. This is what we looked like this night:

Ruba is totally gorgeous and gets hit on all the time. But this specific night the boys only went to her and wouldn't even look in my direction!

I quickly realized we were in a bar full of fuckboys. There they were in their fuckboy uniforms of button downs and khakis, bro-ing out like they were going to the electric chair the next day.

Suddenly, it hit me: Everything I was wearing was total fuckboy repellent. It was awesome, because I, like you, don't have time for fuckboys.

So, here is the perfect formula I've expertly designed to keep those fuckboys away! You're welcome babe!

Every single fuckboy I've ever met is totally turned off by dark lipstick. Do you know why?

Fuckboys are drawn to soft, meek girls. And dark lipstick elicits a very, very specific power that is wildly intimidating to fuckboys.

Women who wear dark lipstick aren't pretending to be innocent doe-eyed creatures — they're owning their boldness. They don't want to hide in the shadows, they wanting to be SEEN by the world at large.

So rock that bold lippy, ladies!

Fuckboys aren't into goth chicks because they're afraid that a goth chick is going to be too outspoken.

And they're right: any girl who rocks all black is usually very outspoken. Her dark attire juxtaposes beautifully against her colorful personality.

Also, fuckboys like to feel like they're dominating something soft. A girl in all black is many things, but she's not soft. She's fierce. Fuckboys can't fuck with fierce.

I don't know what it is, but fuckboys never go for chicks in hats (unless it's like a basic baseball hat with the fuckboy's favorite team on it).

A fedora is a little too mysterious for a fuckboy, and fuckboys are too lazy and ill-equipped to navigate the dark and stormy waters of a mysterious woman.

Whenever I go to an annoying fuckboy bar in my neighborhood, I'm always sure to rock my fedora so I can drink my whiskey in peace.

Fuckboys can't deal with a lot of expressive accessories on a woman because jewelry is an expression of identity. So, if a girl is wearing a ton of jewels — especially if the jewels are from all different parts of the world — he will freak out.

He will know that she's too cultured to jive with him, and he doesn't want to even try and keep up with her.

If you really want to repel him, wear jewelry that makes a LOT OF NOISE. Fuckboys don't like their women to be too loud, so they're turned off by a woman who CLANKS around in her jewelry.

Personally, I don't even think we should assign scents a gender. I mean, how weird is that?

But a musky, masculine scent will really freak a fuckboy out. He will think you're a lesbian, and fuckboys are terrified of lesbians because they know lesbians can pull harder than they can.

Short hair shows that a woman wants the world to see her face. It's a surefire sign that she's super confident, and doesn't hide behind anything.

Meanwhile, fuckboys prefer their women to have plush locks of luxurious hair (preferably blonde) because it's really traditional. And even though fuckboys aren't gentlemen and old school, they like their women to be fair maidens.

If you dare wear a beret, fuckboys will never, ever, ever talk to you.

They will think you're "artistic" (which you probably are), and fuckboys don't really care too much for creative women. Creative women are dangerous and tend to question the fuckboy agenda, and that's not something a bro is really looking to put up with tonight.

He wants to get laid tonight. And you want to be left alone, so rock that beret, honey.

Fuckboys don't always take the best care of themselves, but for whatever reason, they expect their girlfriends to be super immaculate. Fuckboys believe that a woman with chipped nails is a woman who doesn't take care of herself.

Only, it's usually the opposite. Girls with chipped nails are often so busy taking care of their thriving careers, they don't have the time to always have perfectly manicured nails.

Also, fuckboys don't like black, dark red, mauve or purple nails either. They're too witch-like, and fuckboys prefer fairies to witches.

Fuckboys are scared of anything that's really high fashion and cool. They don't like harem pants because they think they're unflattering; Asymmetrical lines make them dizzy.

They don't understand fashion irony or the fact that fashion doesn't solely exist to make a girl hot, but rather, to make a statement.

So girl, rock those weird over-the-knee boots, sport your weird shoulder-duster earrings and wear your fucking black designer cape. Because the more FASHION you look, the less you get fucked with by fuckboys.