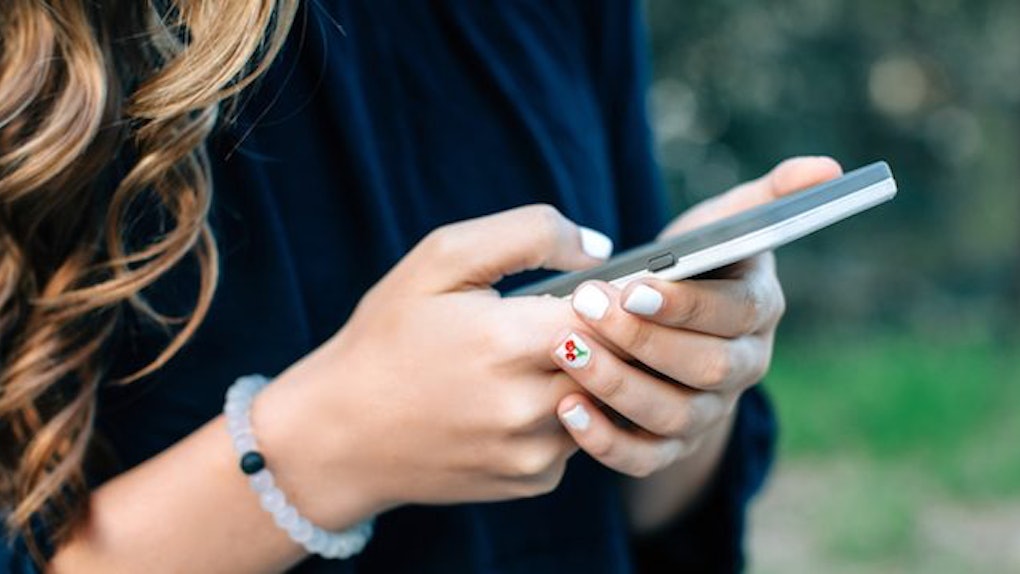 What I Learned After Using Tinder For The First Time

I had my first encounter with Tinder three years ago when I was at a bar with my best guy friend.

While I knew he never had a shortage of women to go home with, I didn't know his latest ploy was finding them on an app that selected and located them for him.

I love him dearly, but like most seasoned male Tinder users, he's had his heart broken from time to time, causing him to fall straight into fuckboy mode — attractive and charming, but only looking to get one thing.

I felt sorry for the girls he swiped with because, if they fell for him, they would have no idea who he really was.

I'd been out of the single game so long being married that, when I got divorced, I was amazed at how girls could just put themselves out there with their bathroom selfies, tits showing and duck face in full-effect for any random stranger to gawk over.

It was like an open invitation to either get screwed or screwed over.

After my friends begged me to get back out there and back online, I decided Tinder was the way to go because I wasn't necessarily looking for a relationship, but just something else — anything else.

I was in fuckboy mode myself, needing a distraction from being hurt and spending all of 2016 as a semi-side chick who was promised a change that would never materialize.

I was reluctant to do it because I felt like I was contradicting myself. After everything I said and made fun of with my guy friends, there I was with a bikini photo and a car selfie.

Of course, I kept my class and remembered I'm a mommy, so my profile said something like, "I'm not into games" and "Looking for someone with good intentions."

Looking for someone with good intentions? Really Marcey? On Tinder?

I may not have known what I was getting myself into, but I knew I would get something out of it, and I did. Here's both what I got and the hard lesson I learned about what some guys expect from girls using Tinder:

My Tinder instantly blew up the minute I signed on. I got a major ego boost on how many "super likes" I got, even if I didn't even know what the hell that meant.

Almost every guy I swiped on was an instant match, and the others eventually became one. I even had guys reach out to mutual Facebook friends asking about me or skipping that all together and privately messaging me.

I didn't respond to most messages, but I secretly loved the male attention and soaked up the compliments from complete strangers. It was what I needed at the time.

Eventually, this banter got old, though. Seeing how many guys responded to my looks and not a damn thing I wrote was entertaining for about a week. No, I don't want to meet up with you at 11 pm — didn't you read what I wrote?

I was just about over it, when someone finally captured my interest.

2. Dates that were actually good.

Not long after, I was singing Tinder's praises, defending the app's stigma of just being for hookups.

I needed to tell single girls everywhere that you can meet a guy who isn't just out to fuck you and that you can have several amazing dates, which I did, even though it was only with the one person I actually followed through with.

I needed to tell single girls everywhere that you can meet a guy who isn't just out to fuck you.

Was it really that easy that I got what I wanted from Tinder less than two weeks in? Or that I had some of the best dates I've ever had and an intense connection that I rarely find with any guy, much less a guy from a dating app? And that I'm beyond satisfied with my find?

It sure as hell seemed that way, so I deleted Tinder, even though I hadn't glanced at it in weeks.

Even though hookups aren't my style, I wasn't oblivious to what most guys want or even expect from any girl they'd meet on Tinder.

Like my guy friend, the guys on the app went after girls they knew had no relationship potential and who were in it just for the sex. OR, they encountered the girls who were annoyingly looking for love and took them out for a spin anyway because they were hot.

So if I was neither of those types, where did that leave me?

I wasn't sure, but I knew the time felt right, so I let myself enjoy what most people say is the biggest perk of Tinder: sex. I'll just say, it was well worth the few weeks I waited. My mind was completely BLOWN.

My "find" ended abruptly, and then, I regretted ever making a Tinder profile.

It was sad. It sucked no longer having the day-to-day nonsense of texting him and sending DMs of funny memes and Snapchat pics. When anything funny happened that I knew he would appreciate, I couldn't text him anymore. I missed all of that just as much as I missed his face.

And the whole time, I thought I was immune to all this bullshit and knew what I was signing up for.

Yes, I knew Tinder was mainly for hookups and one-time dates, but I overlooked the fact that I might actually find someone who was everything I wanted and that he wouldn't be accessible to me in the way I wanted him to be.

I overlooked the fact that I might actually find someone that was everything I wanted.

More importantly if we met on Tinder, he probably thought I knew and understood this from the very beginning.

Even with my guard up, I ironically attracted someone who was another version of my best guy friend, but in a different package. I ended up being one of those girls I used to feel bad for, and I had no one to blame but myself.

I'm smart enough to know that if a guy has Tinder — or any dating app at all — he has an easy opportunity to bail when he feels like it because he has so many other options.

If he questions the potential you have for anything more, or if he needs an escape, it's easy to log in and attract someone new with a swift swipe of the finger.

Personally, I think if you keep your expectations low, if you're OK with the fact that you might only get a good time out of it and if you don't get too wrapped up in the whole thing, then get on Tinder, ladies. You won't be disappointed.