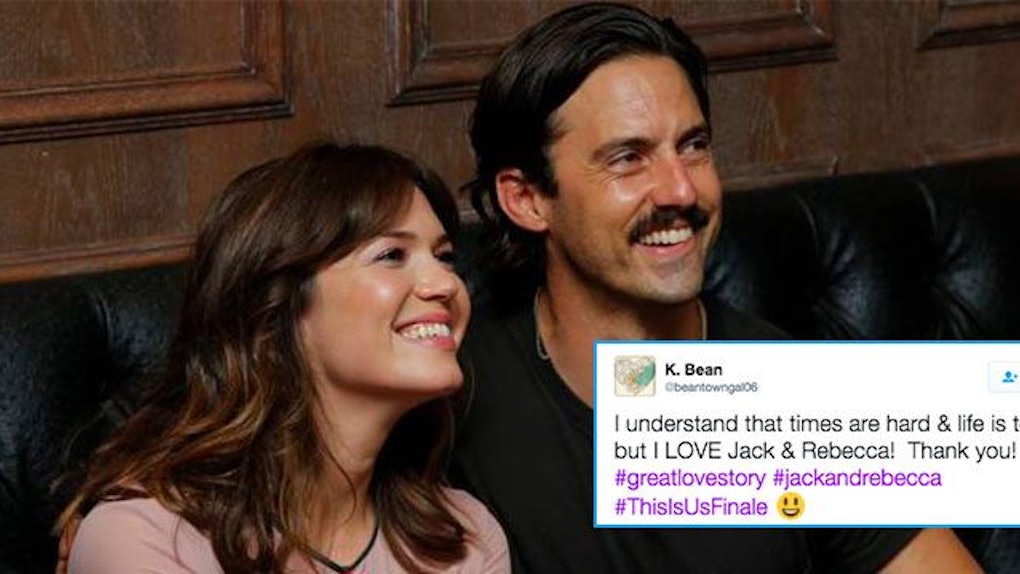 Some of the greatest love stories have ended in heartbreak.

Based off the evidence we've been handed in NBC's hit series "This Is Us," rough times are ahead for Jack (played by Milo Ventimiglia) and Rebecca (played by Mandy Moore).

Despite their hardships, it was last night's season one finale that secured the two a spot as one of the greatest television couples who've ever lived.

Well, because, although they may be down, they most certainly aren't out. Jack and Rebecca's love for one another certainly isn't the most perfect thing we've ever seen, but it's raw, in your face and realistic.

That's what makes it one for the ages.

In this last episode, viewers may have *SPOILER ALERT* seen their relationship put on hold, as Jack finds himself slowly making his way out of the house with bags packed, but that doesn't mean it's over. In fact, it's far from it.

“You're not just my great love story, Rebecca, you were my big break,” Jack said. “And our love story... I know it may not feel like it right now, but, baby, I promise you, it's just getting started.”

I mean, come on now. Have you ever heard words more beautiful? Excuse me while I wipe my tears with this bottle of Pinot.

It turns out, I'm far from the only one with this much emotional attachment to beautiful depictions of imperfect love (and to fictional characters).

Below, you'll find a roundup of tweets that all agree, even though love — like Jack and Rebecca's epic love story — isn't always perfect, it is beautiful:

Who knew seeing such raw emotion would make me want my own love like that?

Jack and Rebecca inspire us to stick it out and weather the storm, especially when you love someone.

Mandy Moore, oh, how I envy you so.

This is the epitome of "relationship goals."

Is it normal for a fictional couple's love to feel so real?

Honey, you're going to have to get in line.

The best love isn't all fun and games. Sometimes, it's a lot of fights, too.

This emoji describes love, too — just a bunch of happy and sad tears.

Love is significantly easier to understand with Jack and Rebecca.

Genuine love is real, it's imperfect and it's out there for all of us.

Now, if you'll excuse me, I'm going to go dream about finding a love like Jack and Rebecca's. It may make me scream, cry, laugh and be happy all at the same time, but if I've learned anything from these two, I know it'll be something beautiful.

And really, that's all that matters.