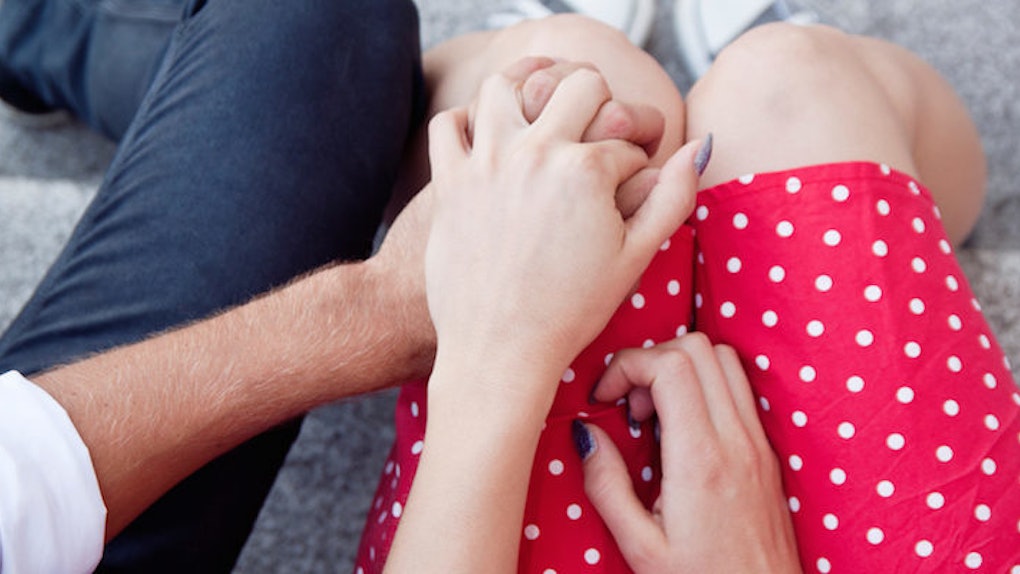 In an age where casual sex is the norm and STDs run as rampant as reruns of "Real Housewives," it makes total sense that they're a huge source of anxiety for us sexually active babes.

But we don't talk about it. Not with our friends. Not even with our sex partners who are directly affected by our STD statuses. I mean, according to our Sex ED reader survey, 28 percent of men and 26 percent of women have never even had an STD test.

We're terrified to bring up the subject because, despite the fact that 70 percent of Americans have HPV, there is so much shame surrounding STDs. We're paralyzed with fear that, if we even utter the word STD, we're going to sound like disease-ridden creatures of the night.

We're terrified to even bring up the subject because there is so much shame surrounding STDs.

I talk about everything related to sexual health, but I'd never discussed the proper etiquette of telling your partner you've got an STD — that is, until one glamorous night out in West Hollywood, CA with my sweet, blonde friend, Kate.*

We were out at a bougie club when suddenly, she was screaming bloody murder at her phone.

"Max* just sent me a text that he has fucking chlamydia!" she cried. "HE TEXTED ME THAT HE HAS CHLAMYDIA! What a dick!"

She slugged back her glass of wine and continued on with slurred speech.

"He says I probably have it, too. He thinks he got it from some random girl he fucked in Vegas. And now, I have to tell my idiot, piece-of-shit boyfriend that he needs to get tested, too, which sucks because he has no idea that I slept with Max," she said, her sweet energy turning sour. "THIS is the last thing I need!"

A prim-looking, Beverly-Hills prototype began to stare at us, tucking her dog deeper into her Gucci handbag as if a $5,000 purse could protect him from catching an STD from two disease-ridden, 20-somethings at the next table.

Kate was practically weeping at this point. "What do I do, Zara?! How do I tell my boyfriend, whom I love, that I have an STD? He's going to break up with me. How the HELL do I do it?"

For a girl who had been kicked out of her house at 17 years old and survived three days in a state psychiatric hospital, Kate was acting as if the possibility of telling her boyfriend she had an STD was the worst thing that ever happened to her.

I found myself at a sudden loss of words. In a world with so much stigma surrounding STDs, how do you properly bring up such a controversial subject?

It's been nine years since that fiasco with Kate, and I still don't know the etiquette for telling a partner you have an STD.

So I talked to Emily Morse, Ph.D (the host of one of my favorite podcasts, "Sex With Emily") at the Brooklyn Sex Expo last weekend to discuss proper STD-revealing etiquette.

Here's what she recommends.

Get tested before you jump to dramatic conclusions.

It's safe to say that step one of revealing your STD status to your SO starts with actually getting tested for an STD.

All those years ago, my friend Kate revealed her chlamydia status to her boyfriend while drunk and sobbing before she even got tested — and thus, before realizing she was actually clean.

Obviously, this is why Morse says you need to get tested on the reg and use condoms. Don't go pulling a Kate, kittens.

If the test comes back positive for one or more STDs, Morse says that you need to "educate yourself as much as possible."

Read up and learn everything there is to know about the STD you're contracted so you can properly explain to your partner what exactly you have, how it's treated (if possible), and how you plan on keeping him or her safe.

With more knowledge, the STD doesn't seem like a scary, vicious monster that's going to swoop in and stab you in your sleep. Education humanizes said scary monster and makes you realize, Hey, while this does sort of suck, I can deal with it. It's not the end of the world.

Really, guys, the more you educate yourself about STDs, the less scary they are.

She also explains that the more uneducated you appear, the more you will freak out your partner, which leads me seamlessly to my next point...

Be calm, cool and collected.

According to our survey, the majority of millennial men (69 percent) and women (63 percent) would inform their current or most recent sexual partner about a positive STD test by “telling them face-to-face." The second most popular method (chosen by 17 percent of men and 14 percent of women) would be to "call them."

So shooting them a text, like in Kate's case, is probably not the most respectful route.

Regardless of which method you choose though, it's important to keep your composure when breaking the news. There's no reason to be a ~drama queen~.

"Don't make such a big deal out of it! Don't turn it into a big thing!" Morse says.

Simply sit your partner down, tell them you've been tested and what the results are, and talk through the next steps.

"Tons of people have STDs," Morse says. In fact, she doesn't think STDs, in general, are THAT big of deal. Most STDs are treatable, manageable and pretty fucking common. You're not special, bae.

By relaying this to your own partner and keeping your cool, it's likely that they'll follow your lead and stay calm, too.

That could mean using condoms at all times, taking antibiotics (in which case, they will likely give you a double dose for your SO to take, too), abstaining from intercourse during an outbreak, taking the HIV-preventive drug PrEp or visiting the clinic regularly. It's important that you follow these seriously and stay on top of the best preventative methods.

And what if your partner reacts negatively?

Our Sex ED reader survey results reveal that only 4 percent of men and women would break up with their current partner if they found out he or she contracted an STD.

But if your partner is one of those 4 percent, Morse says it might be time to rethink the relationship. If you've followed all the steps above and their reaction is still completely out of line and over-the-top, it's very telling about who they really are as a person.

I might not have a Ph.D like Morse, but as your lesbian big sis who has lived, sexed and made mistakes for three decades, I'll tell you this: It is absolutely a red flag if bae can't handle your honesty about your STD test results.

How can you expect them to deal with the rest of life's trials and tribulations if they can't handle a treatable case of chlamydia?

Bottom line: No one is perfect (not even me!) and we all make mistakes (me too!). It shows a lot of bravado in a person's spirit if they have the wherewithal to come (or shall I say ~come~?) clean about their disease.

Personally, I would respect a person who was honest with me about their sexual health. At the end of the day, their honesty directly affects my sexual health. In this small, sexual world, it becomes a giant circle of sexual health, babes.

The more honest we all are, the more STD-free we are, and the happier our circle of sexual health is.