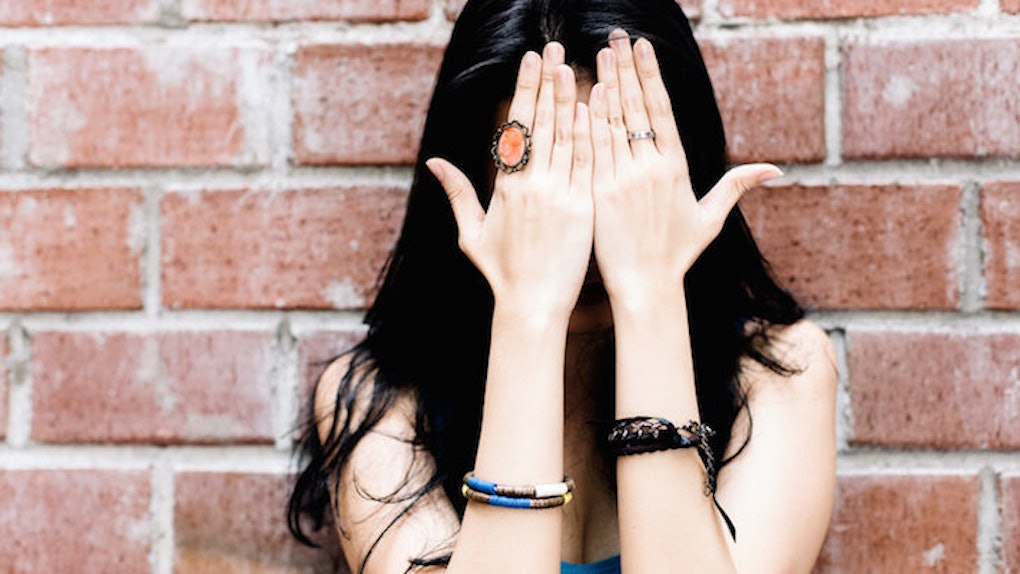 "Luke*, what the f*ck is going on with your eye?" I asked after a hefty glass of Sauvignon Blanc.

It was the first day of spring. My best friend Luke and I had spent the last hour pretending to be cultured at pretentious art gallery in Chelsea. The gallery was so text-book pretentious that it had driven us both to day drink.

Oh sh*t. I thought I had been subtle when I'd noticed the irritated pink tint to his normally clear-as-day eyes. But alas, you can't get much past a gay man. Those bitches notice everything.

"I mean, it's not so terrible. Really. It isn't!" I shamelessly lied through my freshly bleached teeth, hoping to coax him into feeling better. When Luke feels ugly, Luke goes home. And we had a queer party to attend in Park Slope later that evening. There was no way in hell I was going to a 2,000+ people party without my partner in crime.

"It's BAD. I know. Don't lie to me," Luke said, his voice deflated and insecure. He shoved a large handful of fried calamari in his mouth. He was stress eating, and I could tell there was more to the story.

Luke's baby-blue eyes penetrated mine from across the table. "We will take another bottle of wine, sir!" he shouted to our lackluster hipster waitress. She nodded as she rolled her vacant Millennial eyes. Between the sh*t art show and the terrible service, the day was quickly turning into an epic fail.

"All right, I'll be real with you, but don't tell anyone. Promise?" Luke asked. He was exuding an unusually vulnerable energy. Then again, a person with a red, swollen, puffy eye always looks a little vulnerable, ya know?

Luke dropped his guard and started spiraling right in front of my sparking white eyes. "Well, I had a Grindr hook-up when I was away for work last week, and that f*cker came right into my EYEBALL. Now it's SORE and puffy and red! It looks awful. Zara, what if I have pink eye? Do I need to see a doctor? It really, really hurts! Ugh the things we do for SEX!"

"How would you know? You're a f*cking lesbian!" Luke retorted, hungrily staring at his empty wine glass.

"Well, I hope you're right. You have had a lot of eye infections," he said. "But it's only because you're a f*ckgirl who sleeps in her contacts."

He wasn't wrong. I am a total f*ckgirl who sleeps in her contacts.

"Let's drink wine, we have a party to go to!" I responded bitchily as I critiqued my manicure.

It's 2 am, and we are dancing the night away at the queer party. Despite his splooge eye, I can tell Luke is feeling pretty hot. He's killing it on the dance floor and flirting with every hot piece of boy candy in Brooklyn.

I, on the other hand, am having an off night. I've already spilled a glass of champagne, embarrassingly confessed to a random lesbian that I follow her on Instagram and lost my beloved Kat Von D "Lolita" lipstick.

At least you no one CAME in your eye, I think to myself. It can always be worse.

"Luke, let's go home, smoke some weed and watch 'Girls.' I want to have a sleepover," I say.

"Fine. I guess I'm not getting laid tonight because of YOU. AGAIN."

"You can't get laid with that splooge eye," I taunt.

"Shut the f*ck up," Luke says as he confirms our Uber.

The following Monday morning, I wake up in an inexplicable panic. I struggle to even open up my left eye.

UM, why does my eye feel like someone poured peroxide into it? I wonder, a bad feeling snaking its way through my body. I haven't slept in my contacts in at least a week! WTF?

I begrudgingly walk over to my gold-gilded mirror. My left eye is an irritated pink red. It's the spitting image of Luke's splooge eye.

I shoot Luke a text as I hop into a taxi for work (I'm NOT getting on the train with a red eye). "I have a f*cking red eye!" I type and aggressively press "Send" on my phone for dramatic effect.

"Oh god. I just went to the doctor. HE THINKS I HAVE PINK EYE. I'm SO SORRY," he quickly responds.

I'm sure one day I will get some really embarrassing lesbian ailment that he will inexplicably catch, too. Or better yet, one day, he will feel my labor pains right alongside me. And that will be far worse than a few days with a pink eye could EVER BE.