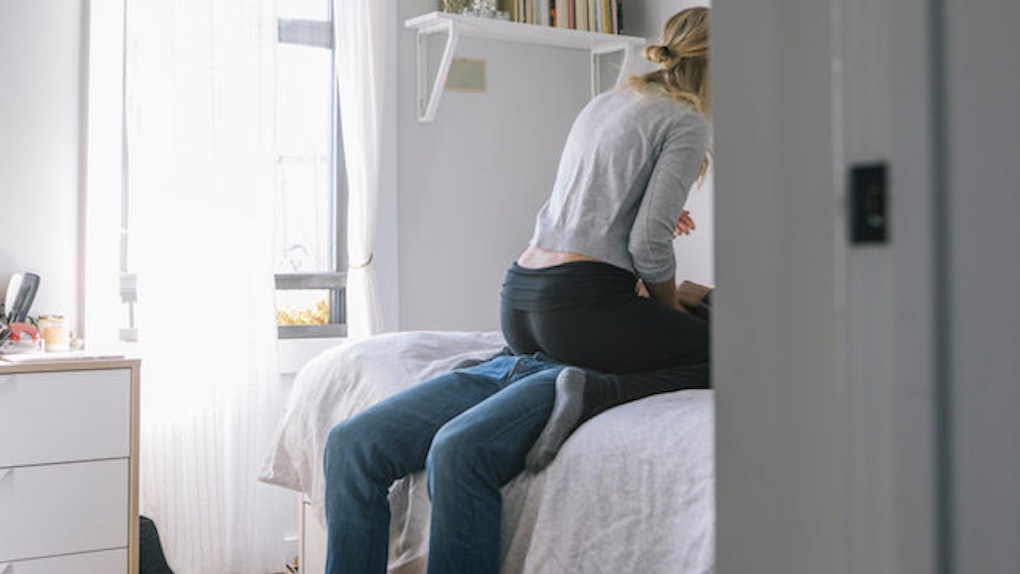 Why Some Guys Just Won't Take Charge In The Bedroom

Dig through the Kama Sutra, and you'll end up discovering enough sexual positions to keep you sweaty and twisted up for a lifetime.

But, despite all of the ways you and your partner can move your body during a hot encounter, chances are you'll find yourself doing the same old song and dance.

Specifically, men are always inclined to request their partner to climb aboard and ride it like a vintage Harley. Cowgirl, or girl-on-top (which would be guy-on-top in my case because homosexual), is super common no matter what your sexual orientation may be.

The big question is: Why?

Some people live out their craziest fantasies behind closes doors, while others decidedly refuse to take charge and would prefer if their partner did all the work. So what is the real appeal to laying back and being a goddamn pillow prince?

I, along with a few candid contributors from Reddit, have come to narrow it down into four distinct, valid reasons why guys don't always take charge in the bedroom.

Sometimes, it's hard not to stargaze.

Being on the bottom allows for a perfect view and only reassures me that you're having a good time. Since I'm usually a literal bottom, not every position has me set up with the best views, but more often than not I favor things that allow solid eye contact.

I want to feel that connection and see the intent behind what you're doing.

Next, it's because it feels damn good.

No matter what way you slice it, sex is good.

The worst sex, even if mundane and one-note, was still decent sex. According to a lot of these guys, this position is so common because cowgirl is pleasurable for both parties involved.

Also, dudes consider it to be more relaxing and give them more time to think and hold on just a liittttttle bit longer.

Also, men being passive is a thing.

Relinquishing control is more common than you think.

I'm all for aggressive foreplay, but there are times when I want to let you do whatever you want to me. Laying there and not taking charge allows you to pick and choose what suits your needs while fulfilling mine as well.

It doesn't have to be a regular occurrence but every once in a while, it's nice to see a role switch happening.

Finally, it's probably because we like to be real, real lazy.

The most common, and probably obvious, theme when it comes to not taking charge is the fact that we're tired.

Exhaustion has set in and pumping and thrusting just won't cut it. Guys are happy to oblige any opportunity to have sex, but sometimes, that means laying there like a dead body and doing minimal work.

It happens to the best of us.

So, if your guy gets submissive every once in a while, just roll with it. Sex is a give-and-take scenario. If he prefers to be on his back, play it up to your advantage. You can still get on and get off, too.