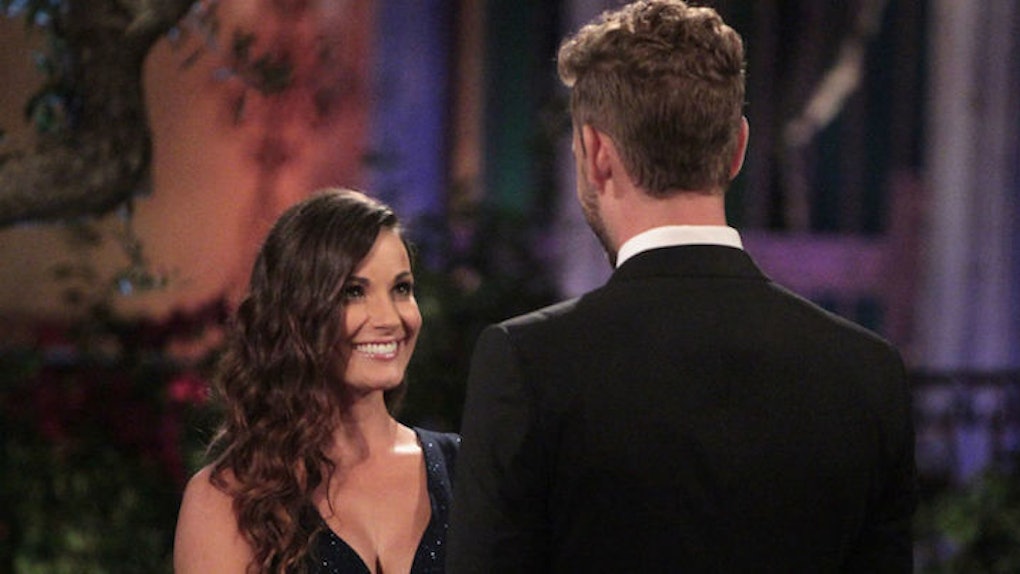 I may not be able to identify someone's butthole in a lineup, but if I sleep with you, odds are I'm going to remember you in someway, shape or vague outline.

For "The Bachelor" season 21 contestant Elizabeth "Liz" Sandoz, she hoped her former romp with leading man Nick Viall at a wedding a year prior wouldn't be an issue during her time competing on the show.

In fact, it seems that the 29-year-old prayed her night with him was so unmemorable, there would be no awkward tension between the two whatsoever.

Sex? What sex? Who had sex? What is this sex you talk about?

Unfortunately, for the young doula, elephants never forget. And Nick just happens to be one scorching-hot elephant.

Despite believing she had 007'd her way into the mansion unscathed, claiming she feels like "he doesn't know who I am... and I kind of like that. I like a little mystery," that couldn't be further from the truth.

“I was caught off-guard," Viall told Lopez. "I recognized her right away. She got out, and I'm like, 'Holy crap, that's Liz.'”

In fact, he was a little thrown off that she tried to pretend like they hadn't just banged it out months prior at former "Bachelor" contestants Jade Roper and Tanner Tolbert's wedding.

(His ex-girlfriends and former "Bachelor" contestants Andi Dorfman and Kaitlyn Bristowe roasted him on Jimmy Kimmel about it, so... it happened.)

He said to Lopez,

She was trying to see if I remembered her, and then weirdly liked that I didn't. So when she was like, 'I'm kind of glad that he doesn't remember,' I'm thinking, 'Wait.' I'm assuming she came at least with the hope that I might be the person she'd want to spend the rest of her life with, so it seemed odd that she was digging the fact that I didn't remember.

The most intriguing part of this whole sexual conundrum is why the producers agreed to put Liz on the show in the first place.

Any of these women would spin into a jealous rage if they saw the other locking lips with Nick (as per "The Bachelor" tradition), so just imagine what they'll do when they find out she's already had a nice look at his penis.

Then again, "The Bachelor" thrives on drama and conflict, so the addition of Liz is a pretty perfect plot twist.

And if you've seen the promo for the upcoming episodes, the other ladies ain't too happy 'bout it when they find out.

I can't really blame them, though. In this competition setting, my claws would be out 24/7.

Citations: Bachelor Nick Viall: It Was 'Odd' That Liz Tried to Trick Me About Our One-Night Stand (Us Magazine)