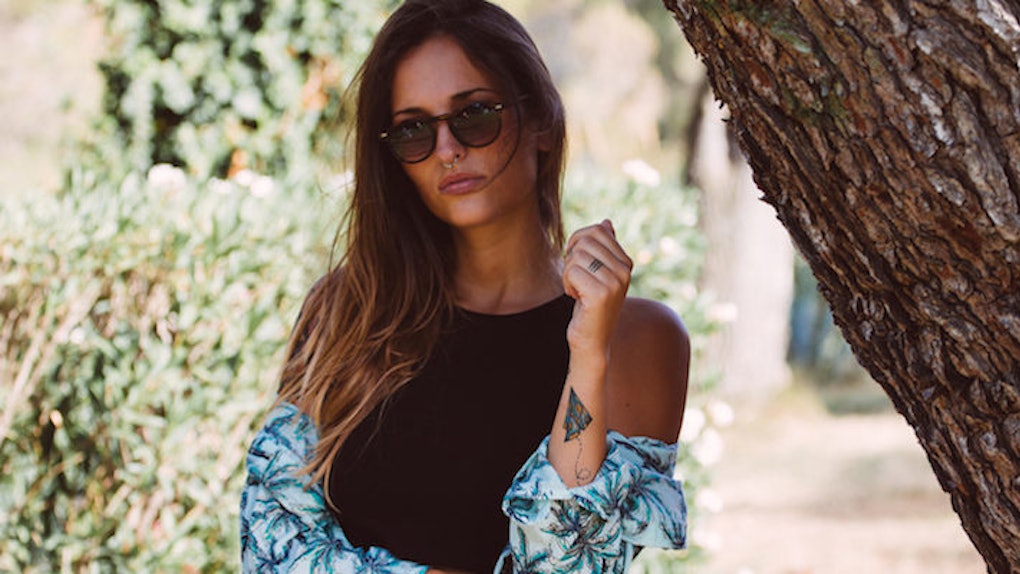 Antidepressants Killed My Sex Drive, So I Decided To Give Them Up

The first time I ever took antidepressants I was 24 and in the thick of a depression so black, I couldn't see my way out of it. There was no light at the end of the tunnel. (Also: Where the hell is this elusive tunnel, and at what point does this alleged light shine through?)

I was living alone in rainy London (tough on the happiest person, let alone a manic depressive), dealing with the aftermath of a pretty dark trauma. I knew I was screwed unless I did something radical to help pull me out of this slump.

I was not chic, angsty chain smoking, "oh she looks a little sad and little thin," Winona Ryder in "Reality Bites" depressed.

I was more like a hopeless Christina Ricci in the movie version of the notorious depression memoir, "Prozac Nation."

I was "can't leave the house" depressed. I was "in the constant throes of an "I'm going to die" panic attack depressed. In retrospect, I was pretty mental. I felt like I was living in a funhouse, everything in plain view was wildly, wildly distorted. Every day was like a journey down a bad acid trip.

I couldn't bear to look at the texture of the brick on the walls of my apartment without wanting to crawl out of my skin. I kept getting these really screwy images stuck in my head: things like abused dogs, graphic images of war or devastated children living in squalor conditions.

My brain would latch on to an image for weeks at a time. I couldn't have a simple conversation with a girl in a bar without a disturbing image lingering in my brain, incessantly taunting me with its wickedness. I later found out this is a classic symptom of Obsessive Compulsive Disorder, which I've since been officially diagnosed with. (It's a total blast!)

So I went to the doctor and took the pretty blue pills (Cipralex, the British sister to Lexapro), and suddenly I could feel the sun beaming against my face again. It was weird; I hadn't realized how much of life I had missed when I was depressed.

Depression does that; you're so stuck inside your own foggy head that you totally forget there is a whole world outside yourself. Taking Cipralex was like wearing really dark sunglasses for several months, and taking them off and suddenly seeing ~light~ in the pale blue sky again.

I hadn't realized how much of life I had missed when I was depressed.

Like, woah, I never knew London had such beautiful trees. I had been living in London in a year and had never noticed the fucking trees in Hyde park; I had walked to work through Hyde park every day. I realized I had blindly strode though a gorgeous city for 365 days.

"I'm staying on this shit for the rest of my life! This WHO I'm supposed to be!" I smugly told my older brother over a late night Skype session. It was like suddenly I had a personality and a sense of humor again, all of the spicy ingredients of my personality were suddenly back. The sprinkles of charm that depression had taken away from me.

I was lucky in the side effects department. I didn't get fat, like everyone told me I would (I put on a few pounds, but it was only because I gained my appetite back after two years with no appetite and no period). I didn't become emotionally numb, if anything I was more engaged and more reactive than ever. I also didn't have suicidal thoughts (a more common than you think side-effect of antidepressants) thank god.

But there was one side effect that burst through my happy-go-lucky bubble: I lost my sex drive.

Not like I didn't check girls out and didn't want to have sex with them. My sexual brain was still in tact. But I couldn't orgasm. And I didn't have the desire to orgasm.

But at the time I was OK with that. I was single, I was healing from trauma, and if anything my shutdown sexuality worked in my favor. I didn't need any distractions when I was on this road to recovery. And I'm easily distracted.

I moved back to America, and the antidepressants weren't working so well anymore, so I went on the Prozac. Shit worked like magic, but I had no appetite for food and no appetite for sex. Next came the combination of Lexapro and Wellbutrin.

I took 20 mg of Lexapro and 300 mg of Wellbutrin. Wellbutrin is notorious for amping up a tired sex drive, if anything, but I was still feeling like I had a totally numb vagina. And it was frustrating because I still wanted sex. My body and my brain were in constant battle.

"Yeah, well I'm not going to LET YOU FEEL ANYTHING, so shut up, bitch." My vagina would purr, like a prim and proper lady, too posh and uptight for something so salacious as sex.

I mean, yes that's a huge part of it, most of it even. My decision to go off anti depression is rooted in my sex drive.

I mean my sexuality is such a core part of who I am, and I don't feel like myself when there is a filter between us. I wanted my body and my brain to be on the same page again. I wanted to feel things without the filter of prescription drugs. If there is a wall up between me and my sexuality, surely other sensations are blocked? I wanted to feel all feelings raw, again.

I wanted to feel all feelings raw, again.

Plus I've been in therapy for years now, and I'm in a pretty grounded place. I know if I fall off the deep end I have a real support system that will catch me before I hit the ground and break open my face. I would never just recklessly stop taking the pills. (Maybe 20 year old me would, but 30 year old me doesn't mess around with mental health.) I've oh-so-slowly weaned off them, as instructed by Dr. Feelgood.

And now I'm feeling super sexually wild. Like, I can't get enough. You know how I said earlier that going on antidepressants reminded me of how much I had been missing when I was sad? Coming off them really has showed me how much sexual chemistry I had been blocking when I was on them. Now I'm consumed with thoughts of ripping clothes off, and my orgasms are so powerful, they have come back with a vengeance.

I bet you're wondering if I'm losing my mind as a result. It's like a convoluted game of "Jeopardy," "happy or horny?--which one will you, choose?!"

Did I have to stop taking my antidepressants because I was losing my sex drive and that was making me depressed? Is there always a compromise to everything?

Well truth be told, sometimes I do feel like I'm losing my fucking mind. I definitely feel like I'm walking around the world like a vulnerable open wound that anything can seep in and infect.

The bandage has been torn off, and I'm feeling pretty naked and exposed, babes. It's definitely harder than laying in the cushy arms of the medicated life. The anxiety is back. The sadness is back. I even got a disturbing image someone posted on Facebook of a child in war stuck in my head for the past several days, and I'm freaked out it will never go away.

But I'm OK with it. I'm also feeling the good things, like sex and love and triumph, so much more intensely, it might (MIGHT) be worth it.

And I think the beauty is this: The pills helped me get to a place where I could learn how to use proactive tools to crawl out from under the blanket when it all feels too much. I can go for walks, talk to a shrink, put on a podcast, write it all out or have sex with my girlfriend. There are so many things that help me feel better, for a few moments.

And so for orgasm's sake, I'm going to try it out. At least for now.

Important to note: DO NOT STOP TAKING YOUR ANTIDEPRESSANTS WITHOUT TALKING TO YOUR DOCTOR. THIS IS JUST ONE CRAZY LESBIAN'S PERSONAL EXPERIENCE.