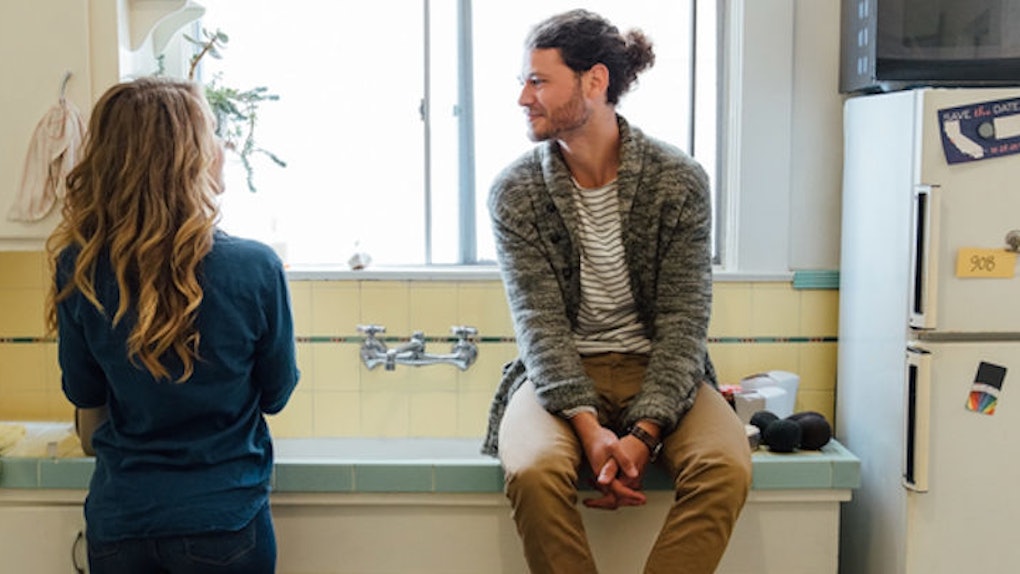 When my boyfriend and I started dating, we (he) made the decision that I couldn't write about our relationship on the Internet.

But now that we've passed the one-year mark, signed a lease and moved in together, I don't really see him going anywhere, and thus this article came to mind.

Many people jaw-drop at the fact that we took this major step and moved in together. We've heard everything from "You're so young!" to "You've never dated in the same city before!" (shout out to long distance couples!).

But you know what? Life is short, so why not?

Don't you want to figure out if you're making the right decision as soon as possible so you can get out while you're still young? (Don't worry babe, I'm not going anywhere, unless you find this article and disown me, but please don't because we just dropped $10,000 on fees for this apartment).

Living with a boyfriend is definitely different from living with roommates. I mean, you aren't going to have food-baby contests with your boyfriend, are you? That's just unattractive.

For those of you who are reading and are about to jump down my throat to tell me that if you're living together you should be able to be your complete and uncensored self, hold up for a second. There IS such a thing as being too comfortable, and if you don't believe me, just try it and see where that leaves you.

So, on that note, let's start from the beginning of what happens when you move in with your significant other.

1. Keep the mystery alive, and conceal your bathroom habits.

I don't care if you just drowned in Chipotle and are facing the awful repercussions. Keep that to yourself.

There is nothing less attractive than sharing your B-room habits with your boyfriend. I don't care how comfortable you think you are with one another. That grosses him out EVERY SINGLE TIME.

If you think he's entertaining your comments about said bathroom habits, he's just being nice, trying to tune you out and praying to all that is holy that you will STFU instead of delving deeper into your story.

2. If it's your time of the month, it's also your time to take out the trash.

I don't care if you wrapped your discarded products in 10 layers of duct tape; the trash is your responsibility for the next three to five days. And yes, this is the extent to which your BF wants to hear about your period.

3. Lying in your own filth is only acceptable when he's not around.

You may think the fact that you hate showering is cute, but he, on the other hand, does not, especially when you're sharing a bed.

Unlike your girl friends who like to compete for who showers less, this is not a conversation your boyfriend wants or needs to hear. It's especially concerning when he knows how frequently you exercise.

PSA: I've showered more in the last month, when this lease started, than the entire duration of August. I don't even know who I am anymore, but I am getting a lot of compliments on my hair.

4. You will be ignored from Sunday's sunrise to Monday's sunset (and probably a few hours afterward).

The key to living together without hating one another is to do your own thing. Just because you are now cohabiting does not mean you need to spend every waking second together.

Instead of yelling at your BF for completely immersing himself in fantasy football (FANTASY? WTF! IT'S NOT EVEN REAL), embrace this time, and go do something by yourself or with your friends who you've probably been ignoring.

5. You will gain weight, and you will shadily enjoy it.

The best and worst part about living with a boy is he is always hungry. It really must be nice to live a life in which you can essentially eat whatever you want without feeling the urge to hit a spin class afterward.

But when the clock hits 11:30 PM and your cravings kick in, it is nice to have someone to split that delivery bill with.

6. If you keep your Netflix show on in the background long enough, your SO will learn to like it.

Your boyfriend may judge the fact that you've crushed seven episodes of "Private Practice" in a row, but there's no better feeling when you're in the middle of the eighth, and he asks you to recap what he missed.

7. The toilet seat will never be put down.

I'm not sure why the woman has the final say in this case, but no matter how many times you remind him, the toilet seat will never find its way down.

Also, the more you remind him, the lesser your chances are of this actually happening.

Before you complain to him about not listening to you, just remember that you're doing the exact same thing to him. I mean, do you really care about whatever trade was made for whatever team that plays whatever sport?

9. Staying in just got a lot more enticing.

There's none of this "whose place would you rather hang at" debate because you're both already with each other!

There's no packing an overnight bag, no inconvenience factor and no traveling involved! Everything you could want and need is literally in your apartment.

10. Your friends are secretly envious of you.

Being single has its pros, but finding a person you want to live with definitely outweighs them. While your friends feel the need to go out and party in hopes of meeting "the one," you're already living with yours.

You think there's pressure when you're living with someone? That pales in comparison to the pressure faced by single people everywhere.

11. You always have an excuse to bail on anything and everything.

Don't feel like staying out any longer? Blame it on your SO!

Isn't that the point of having a boyfriend/girlfriend anyway? To serve as a scapegoat for things you don't want to deal with?

If I knew this was all it would take to have gifts showered upon me, I would've suggested this arrangement a long time ago. No wonder people get married.

13. You rarely have to do things alone ever again!

Don't feel like doing laundry? Neither does your boyfriend. But if you do it together, you'll both get it done. Same goes for food shopping. And even the gym.

The issue with living with just one other person is he knows exactly which mess is yours and which is his. There is no shifting of the blame or pretending you didn't do something, which is unfortunate because you really don't feel like emptying the dishwasher.

15. There will be snaps, lots and lots of ugly snaps.

This morning, I woke up to a snapchat that was sent to me by my boyfriend two hours ago. I really think he discovered my good side.