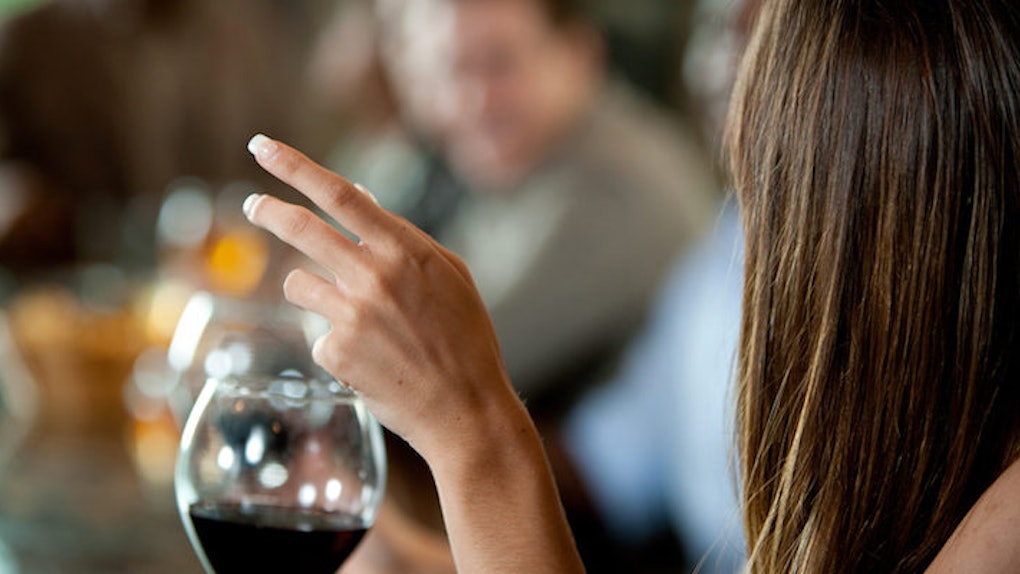 I've been single for a long ass time. But I don't seem to mind.  I mean, I don't ever really try to pick up men.

I often go out to eat with a girlfriend or two, where we'll point out the cute guy sitting at the table across from us, wishing we had the guts to approach him.

Actually, if we're wishing things, the real wish would probably be that he'd come up to our table and say "Hi." That doesn't seem to ever happen though.

For example, I went to Earls (a popular downtown Vancouver restaurant) last week with a girlfriend and we both agreed the guy sitting at a table near us was a major babe.

He didn't notice us staring at him. He was on his phone, probably scrolling through Happn instead of looking up and noticing two live girls less than 10-feet away.

I recently turned 30 and I suddenly have the guts to do things I never had the guts to do before. Maybe it's the concept of time passing me by, and the realization that I have nothing to lose.

That's why last week, for the very first time, I finally tried a pick-up move on a guy at a restaurant sitting less than 10-feet away from me with his buddies.

I was bold. I was fearless. I was laughing the whole time.

I knew this was a big milestone for me, and I have a dating advice column where women appreciate me being the guinea pig, so I decided to live tweet the entire thing.

Here's how it went:

Have you ever picked up a man at a restaurant by sending him a drink? I'm going to live tweet my first time doing it! #dating101 — TheBabeReport (@thebabereport) 17 September 2016

I'd actually gotten his server's advice about how to pick him up, and she suggested sending him a beer. To be fair, that was my initial thought too, maybe sending an order of fries or a beer.

Step 1: I spotted him from across the restaurant and asked his waitress for advice on how to pick him up — TheBabeReport (@thebabereport) 17 September 2016

This guy was really cute. I know that sometimes, guys are cuter from far away, but I was convinced he was beautiful.

I spotted him the moment I was seated. I realized it's lame I never have the confidence to approach men in real life, so I wanted to do it for once.

This is how I thought it would go down: I'd send him something. He'd then send me something, too. Then he'd come up to our table, say "hi" and tell me how awesome it was that I did that.

He'd comment on how nobody ever does that these days, and we'd chat about how more people need to. Then we'd make out or exchange numbers or something.

Step 3: i wanted to be funny and send fries, but she suggested I send a beer #datingadvice — TheBabeReport (@thebabereport) 17 September 2016

I thought it would be funny to send food instead of sending a drink, but I took her advice and sent the beer. I figured she knows him better than me -- she's been serving him for the last couple of hours.

The waitress and I chat about singlehood. She's been single for 3 years. Even when she's flirty while serving men, she never gets asked out. — TheBabeReport (@thebabereport) 17 September 2016

Isn't it crazy that a beautiful waitress with a gorgeous smile and a friendly personality has never gotten asked out or picked up -- even when she's flirting with the guy she's serving? To me, that's nuts.

It seems like men (and women) don't have the balls to flirt in real life anymore, because they know they can take the easy way out and use dating apps.

Step 4: I ask the waitress when she'll send him my beer and she says she'll wait until he's almost done his current beer. Ugh. Patience? — TheBabeReport (@thebabereport) 17 September 2016

Could he be drinking any slower? (Insert Chandler Bing voice.) Patience isn't my strong suit.

Step 5: My food just arrived. Great. Now, when she brings him my beer and points at me, I'll likely have an attractive mouth full of burger. — TheBabeReport (@thebabereport) 17 September 2016

This was legit the worst part.

My food arrived and I noticed he was almost finished with his beer. I debated not eating my burger because I didn't want to risk her bringing him the beer and pointing me out while I had a huge mouth full of burger, but I realized that was dumb. I'm such a girl sometimes.

I ate a huge bite and never cared.

Step 6: She just brought him the beer and pointed at me saying it's from me. He gives me a smile & an air cheers. That's it??? — TheBabeReport (@thebabereport) 17 September 2016

I remember this part. I remember thinking "This better not be all he fucking does." An air cheers? That can't be it. And couldn't he at least send me something back? I was almost finished with my mimosa. Could he not send me a mimosa? Come on.

Step 7: all his buddies are fist-bumping him, I guess to congratulate him on getting hit on. — TheBabeReport (@thebabereport) 17 September 2016

No exaggeration. He was with four friends and they all gave him a fist bump after I sent him a beer. I was thinking "Ummmm, maybe don't fist bump him until he gets up off his ass and walks over to me to say thank you."

Step 9: This is my first time trying this and I'm disappointed. He's over there drinking the beer I bought him looking all hot & ignoring me — TheBabeReport (@thebabereport) 17 September 2016

He's literally drinking the beer I bought him and eating ribs, and never looked over at me again. Um, you're welcome? Seriously, WTF.

What I really appreciated was that he not only came to say thank you for the beer, he also sat down at my table and chatted with me for a while and got my number.

That rib-eating cutie still should have bought me a mimosa, though. It's only fair.

His friends come up and tell me that I'm confident and they like it. They of course mention how more women need to do that. I said more men should do it, too.

So even though it didn't go down exactly how I imagined it would, it still worked, and I felt great for trying something new.