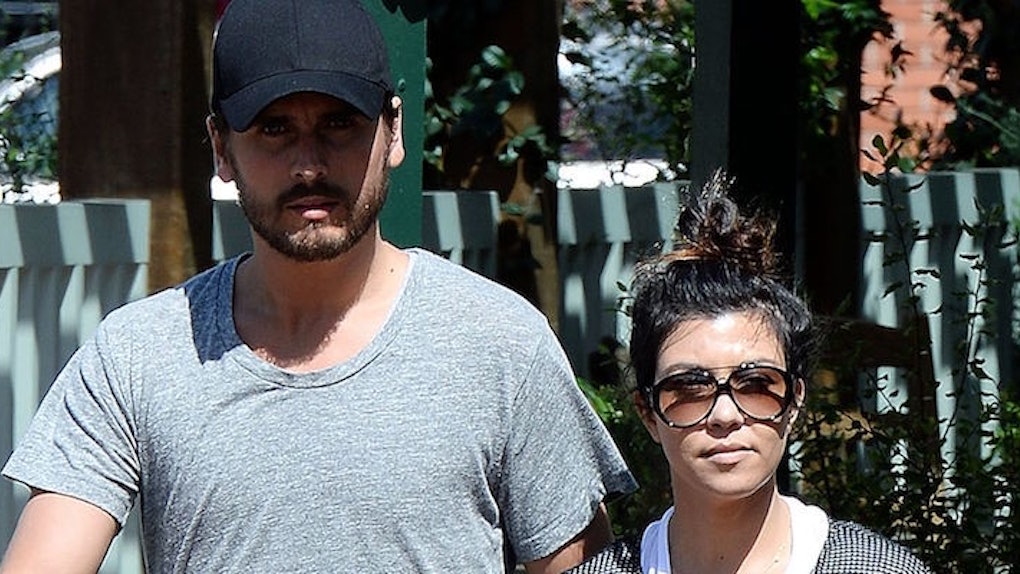 Hold on to your butts because Scott Disick and Kourtney Kardashian are back together again.

"Keeping Up With The Kardashians" fans have followed the volatile couple's journey for over a decade, and they've ridden Kourtney's emotional roller coaster of being in an on-again-off-again relationship through Scott's addiction issues, three beautiful babies and exactly one Justin Bieber scandal.

Alas, their love story isn't that uncommon. So many of us suffer from the will-we-won't-we relationship syndrome.

This is what it feels like to be in the eye of a flimsy relationship hurricane:

Phase 1: This relationship is going to last forever.

I've always entered every relationship with generally good intentions and optimism. In the beginning, for me, every guy I've ever dated is potentially "The One."

One time, I dated a fisherman in South Carolina and fully prepared myself to become a southern housewife who could make bomb iced tea and wear khakis un-ironically.

Point is, phase one is the best phase because anything is possible.

Phase 2: Did I make literally everything up in my head?

Uh-oh. Phase two of an on-again-off-again... the first off-again you run into.

This is the most confusing and disorienting phase because it's the first time you realize maybe you aren't right for each other.

It drives me up a wall.

I start to doubt we were ever good for each other at all, which makes me feel crazy because -- hey, wait a second, not long ago, wasn't I going to be a fisherman's wife and own tea towels?

It's easy to feel like this is the cut and run phase, where you throw in the towel and try to sneak out the back door or make up some sort of excuse as to why it isn't working out.

Here's an equation to write down in your diaries: The more complicated the reason you're breaking up = the more likely you are to get back together.

Phase 3: Wait, I can't live without them.

My favorite thing to do is assign an inordinate amount of emotional importance to literally every aspect of my life, so the idea of potentially losing a relationship I was once fully invested in takes it out of me.

What about the good times?

What about the times he tucked my hair behind my ears?

Phase 4: Wait, I can't live WITH this person.

Actually, on second thought, I can't stand this human. (The second or third "off-again" phase is much easier to lean into.)

Every little thing becomes a sign we aren't meant to be together, the most glaring of which is this whole song and dance that keeps happening.

Better block them from my phone and start speaking with an accent, just in case.

Phase 5: Maybe this is what love looks like and I should just accept it.

This is the worst phase.

The phase where I stop believing true love exists, and all we can ever hope for is someone to pop in and out of our lives to remind us we aren't entirely alone.

This phase is packed full of doubt, anxiety and an overwhelming sense of complacency.

Usually around this time I start gaining weight because WHAT IS EVEN THE POINT OF NOT EATING FRIED FOOD WHEN TRUE LOVE IS DEAD?!

I mean, did you guys even SEE "The Notebook?!"

What about the part where we all get crushingly tragic memory diseases and our SO reads to us until we die together in our sleep?

You know what? I'm going to double down at this point and make our love COUNT FOR SOMETHING.

Phase 7: God, I hope I never meet their parents.

By now, I've usually figured out something isn't right here.

Maybe I'm too exhausted by phase seven to do anything about it, but I can definitely prevent the progression of this relationship.

Phase 8: I guess I'll spend Christmas, Easter and my own father's birthday with their parents.

Woops, somehow his mom and I now own matching earmuffs.

"Wow, this is ridiculous, but goddamn do I love your parent's vacation home."

Phase 9: This relationship is going to last forever.

ANNNnnddd we're back to where we began. You silly reader, you thought there was going to be some sort of conclusion to this story.

Maybe if you're on-again-off-again relationship is like Kourtney and Scott's, you have three beautiful babies by now.

If it's like mine, maybe you stocked up on Arnold Palmers and are faking the iced tea thing.

One thing is for sure — hang on.

You and I both know this roller coaster has more loops, dives and twists coming at you faster than you can say Kris-Jenner-is-actually-badass-I-mean-wow-her-first-husband-died-and-the-second-is-now-a-woman-and-also-what-about-her-crazy-kids-geez.