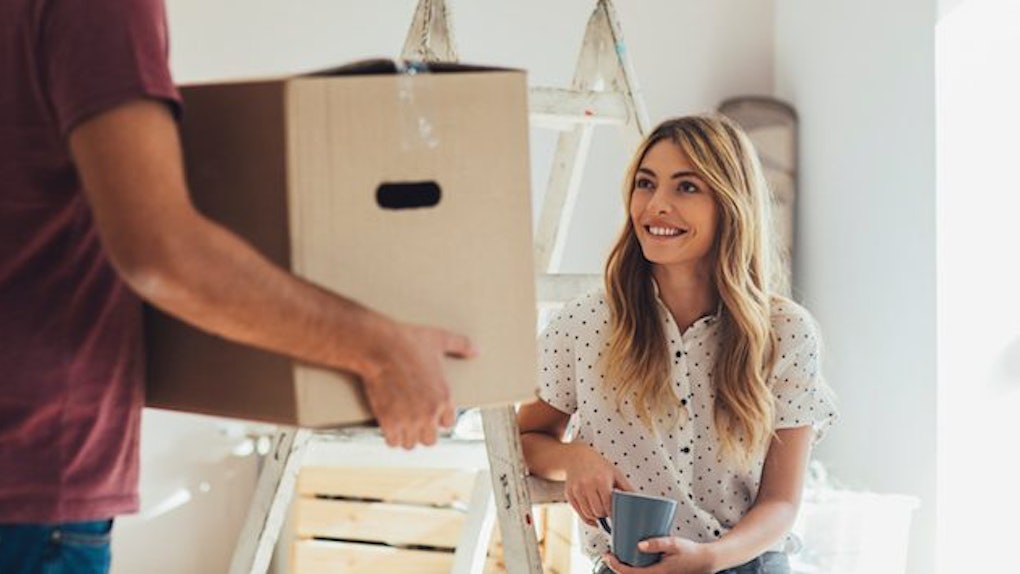 Why Moving In With Your Boyfriend Quickly Is A Good Idea

Look, I'm a big believer in love at first sight, soulmates, fate and the idea that maybe not everything is just one big random ride on a rock floating through outer space.

So now that that's been said, full disclosure: My boyfriend and I moved in after dating for six months.

Believe me, I KNOW. It was risky to say the least, but oh my God, has the payoff been the bomb titties. (Kids still say bomb titties, right?)

Anyway, I'm a big fan of diving head first into love and feelings, and I think happily-ever-afters are waiting just around the corner for all of us.

So, if you're truly in love — and that part is KEY — then rushing into moving in with someone isn't the dumbest thing you could ever do. In fact, in a lot of ways, it's actually smart.

Based on my experience, here's how making the hasty choice to live with my boyfriend ultimately ended up being the best decision I could have made:

Everything about your relationship (and life!) is a lot more fun.

Think about having a slumber party with your best friend every single night — that's literally what it's like.

There is a big difference between going everywhere together and already being together. Every little thing is, like, 40 percent more fun because now, you get to do it with your partner in crime.

Even mundane things like cooking breakfast or watching trash reality TV is exponentially more entertaining because you have someone you love there to experience it all with you.

Isn't there a saying about how life is best lived when shared with someone you love? That's what I'm getting at here.

If you're looking to take your relationship to the next level, learning your partner's bowel-movement routine is one way to expedite that.

OK, I'm kidding. But seriously, once you decide to share a home with somebody, it's incredible how quickly you rack up milestones in your relationship.

It's incredible how quickly you rack up milestones in your relationship.

First couch, first Christmas tree, first night away from one another, first breakfast in bed, first snow storm, first dog... you get it.

If you weren't a real team before, you are now, as every decision you make directly affects the other person. Living together builds instant support and trust and demands open communication and honesty, which are all great ingredients for a happy relationship.

Rent and finances become a lot easier to manage.

Don't think of this as THE reason to move in together, but certainly consider it a major bonus, especially if you've been flying solo for some time.

For my boyfriend and I, we live in the massive, bustling city of New York, and the journey to and from each other's places cost us $6 on public transit alone, not even considering any taxis we decided to take on a drunken evening.

And rent is EXPENSIVE. No matter where you live, it always feels like an inordinate amount of money to pay for a place you don't even own at the end of the day.

Cutting all of your expenses in half is a great way to relieve stress and save extra dollars to do more fun things, like dinner dates and weekend getaways.

Just be sure you are honest about your finances before going into it.

If things aren't going to work out, you learn that more quickly, too.

I mean, no one should move in with anybody unless they really love that person in the first place...

HOWEVER, if things aren't going to work out with you and your significant other, I promise nothing you decide to do or not do is going to change that, especially if you don't see it coming.

Living together really is a nice test run to see if your life will ultimately fit into or around someone else's for the long haul, and yes, I mean in marriage or a forever partnership.

If you aren't meant to be, that will reveal itself pretty quickly.

If you aren't meant to be, that will reveal itself pretty quickly.

The only thing you need to make the jump into living with someone is the feelings of true love and the intention of everything working out (and wanting to put in the effort to make that happen).

All and all, moving in with your boyfriend is awesome, love birds, so come on in! The water's fine.