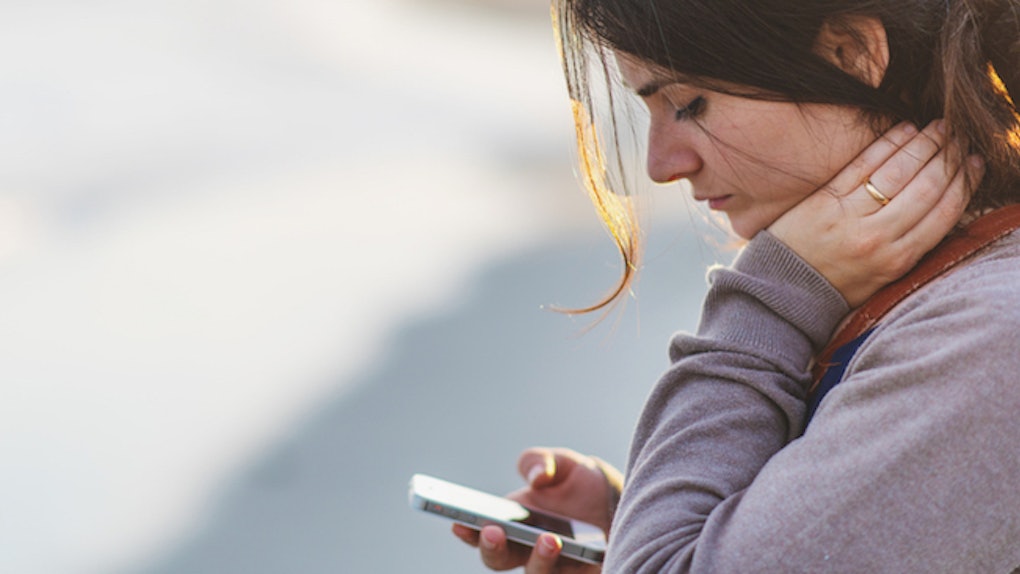 Why Do I Keep Comparing Myself To His New Girlfriend?

Breaking up is hard.

Whether coming out of a long-term relationship or a casual six-week situation, things end up awkward, uncomfortable, and always hurt.

Over time, the pain of the breakup subsides and things get easier. That is, until a genuinely cute picture of your ex-boyfriend and his new girlfriend pops up on your newsfeed.

Your stomach suddenly implodes with feelings you thought were long gone.

In my experience, I've never been the first one to land a new relationship post-breakup. Instead, I'm more of the "warm up act," with guys moving onto "the one" right after me.

My therapist says it's not this black and white, but I can't help but wonder: Why wasn't I enough?

It's hard not to be curious about this new person in my former flame's life... and you can bet I'm going to go full Nancy Drew on their social media.

While battling some insomnia, I'll start spiraling through her Instagram, comparing our general appearance, our success, and anything else I can nitpick.

The list of pure crazy goes on. I become an ugly, judgmental person. I don't know this woman at all, and yet, I'm comparing myself to what little I can gather from the filtered happiness.

Why the masochism? My guess is insecurity and lack of self-love, but I'm still figuring out how to stop.

To help get me (and hopefully, others) off this path, Elite Daily consulted some experts to help us figure out why we compare ourselves to our ex's new girlfriends and how to stop doing it.

Why do I continue making comparisons if I'm not going to be happy afterwards?

Your ex-boyfriend could be dating a man now, and you would still find a way to compare your legs to his.

According to relationship and etiquette expert and author April Masini, "When you're comparing yourself to your ex's new partner or your current partner's last partner, it's because you want to be the one and only, and since you can't, you want to be the best one ever."

All this comparing probably means that you don't feel as great as you should, and now, you want some validation.

"We wonder if the new one is an 'upgrade' from you," says Thomas Edwards Jr., founder of The Professional Wingman.

We infrequently question our leaving of a relationship until we see them with someone new. At first, we look at their physical looks, then we pay close attention to their dynamic and how our ex is behaving around their new significant other, seeing if they appear happier than when we were with them.

When you find yourself comparing your life to theirs, remind yourself of something you feel proud of, whether it be an accomplishment at work or the puppy you just adopted.

We compare to size ourselves up. It's not about who he's dating now, it's about how we value ourselves.

Start doing more of that.

What does he see in her that he didn't see in me?

Let's assume you are objectively "better" than your ex's new girlfriend in some way.

That doesn't necessarily mean that you're the better match for him.

According to Edwards, "The fact our ex is dating someone different than us says a lot more about our ex than it does about us."

She's different than you are, and that's kind of the point.

You broke up for a reason. As tempting as it can be to try to turn relationships into mathematical equations, they simply aren't calculations.

"I can speak from experience, the women I dated and those who I was exclusive with dramatically changed over time," says Edwards. "That's because a 'type' really doesn't exist."

It's best not to get hung up on the details. Some people just aren't a good fit.

So what can I do to finally stop googling her?

Take it one day at a time. Don't look her up. Unfollow him. Do whatever it takes.

Don't think you need to jump into another relationship just to forget about him, either. It's more important that you start loving yourself.

I know, it's literally the most difficult thing to imagine — loving yourself?! But it's very possible. It just takes discipline.

In your darker moments, remind yourself you are no longer with him for a reason.

"You probably were different 10 years ago than you are now, and maybe very different," says Masini. "That calls for different partners. If you accept that version of the way life goes, you'll understand that there's no win — there's just compatibility for different times in life.

Getting over someone is hard, especially when they look extremely happy with a new girlfriend.

"The most important thing to remember is you left your ex for a reason and it's because it was the best decision for you," says Edwards. "The more you focus on continuing to 'upgrade your life,' the less it'll matter what your ex is up to."

Remind yourself that you are enough, and remember that if it was meant to be, you would still be together.

You need something different right now in your life, and you'll know it when you see it.