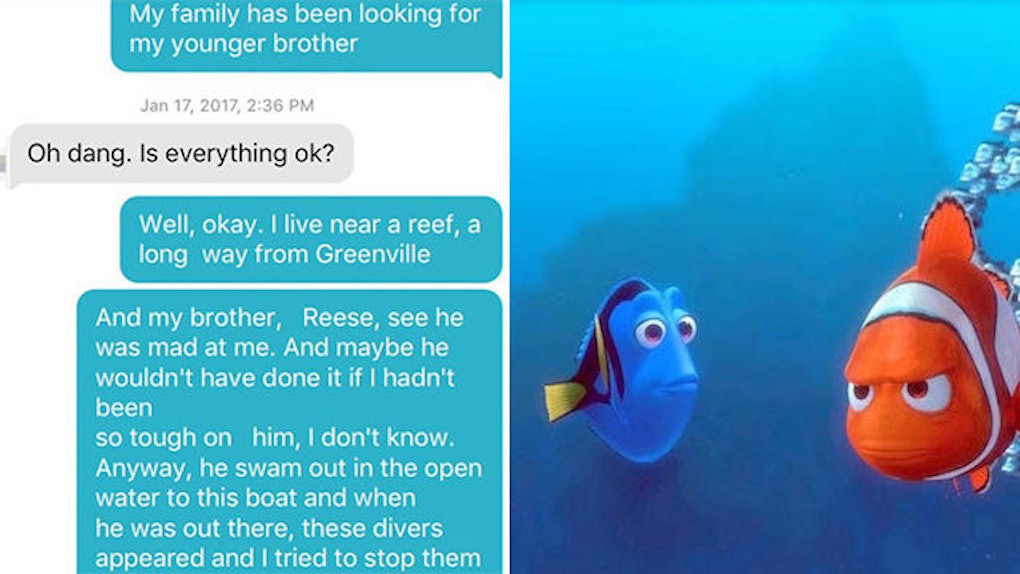 Matching with someone on Tinder is always a serious crapshoot.

Despite innocent-looking pictures, you may never even get the chance to greet them before they're offering to fuck your brains out.

No? That only happens to me?

Well, for Tinder user Carly, she decided to spice things up by converting the entire plot of the Disney classic "Finding Nemo" into her own life story and the perfect conversation starter, according to Metro.co.uk.

The girl started things off by letting her match Matthew know she was in pursuit of her missing younger brother.

I don't know about you, but that would've turned me off immediately. This is Tinder — what kind of dirty talk is that?

Switching out the main fish characters Marlin and Nemo for her actual family members, Carly successfully convinced Matthew of what sounds like a mid-ocean kidnapping incident.

Since Matthew is clearly a class-act, Carly's troubling tale almost led him to contact authorities to help.

To be honest, I really think Carly dropped the ball here. Matthew sounds like a total catch, even if he thinks calling the police will help save a man from a weird shark attack. Also, has he really not seen "Finding Nemo"?

Carly's odd sob story came to a close after Matthew finally asked why the fuck she chose Tinder of all places to vent about this.

I mean, she basically told him her dad has mostly like drowned, and a stranger took her brother and may sell him on the black market.

This is certainly not the most routine conversation for a dating app, but I'm sure it's not the weirdest.

We'll never know if Carly and Matthew continued with their conversation, fell in love and had a beach-set wedding, but we do know she posted the entire conversation on Twitter and let social media's finest laugh their asses off.

What I do know is I may never be able to watch "Finding Nemo" the same way again.

Citations: This girl managed to get through an entire Tinder conversation by quoting Finding Nemo Read more: http://metro.co.uk/2017/01/19/this-girl-managed-to-get-through-an-entire-tinder-conversation-by-quoting-finding-nemo-6391068/#ixzz4WE3BEARs (Metro.co.uk)