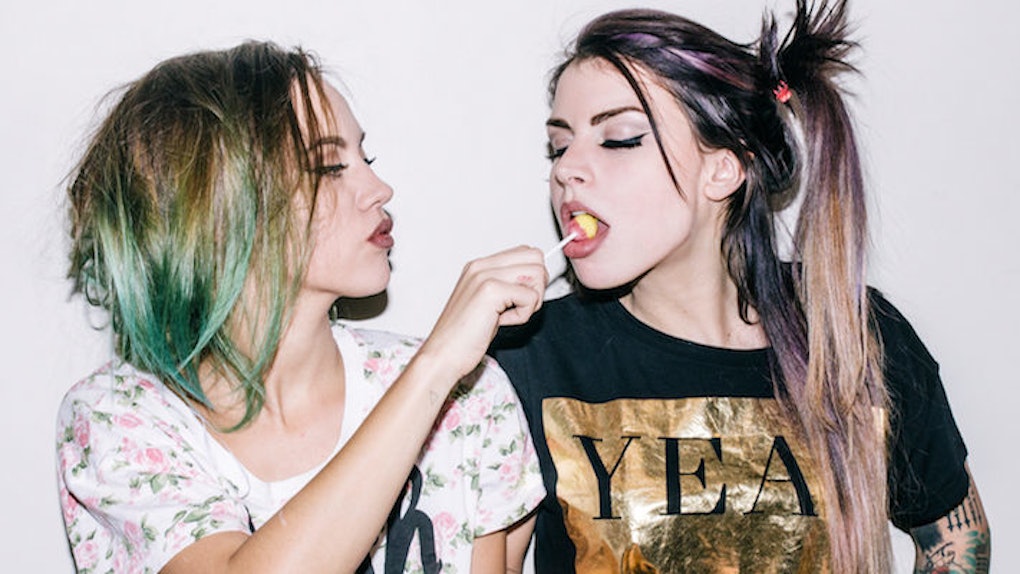 A while back, I wrote a 1500-word article about all the orgasms I've faked in my brief time on planet Earth.

Am I proud of the slew of orgasms I've faked? God, no. But pride, my darlings, has never really been my thing. Brutal honesty is more my jive. And I feel a pressing responsibility to be real and transparent with all of you, even if it means throwing myself under the bus and shaming my family from time to time.

So yes, I've faked many an orgasm in my day. The cat is out of the f*cking bag. But you know what I realized just the other day? I haven't faked a single orgasm in at least six years. Maybe more. And I would never fake one again. It's in my new moral code to never fake anything, let alone a sacred o-r-g-a-s-m.

Did I wake up one fine morning and simply say to myself, "You know what, Zara? You don't need to fake that sh*t anymore"? Nah, it's never that simple. There was no crystal clear epiphany that made me flip the proverbial switch and NEVER FAKE AN ORGASM AGAIN.

Truth be told, I just got older, and the older I get, the less time I have for bullsh*t. And faking orgasms is a whole lot of bullsh*t.

And guess what? As I slowly transitioned out of the fake orgasm lifestyle and into the real orgasm lifestyle, a beautiful thing happened: Sex became a hell of a lot better. When you're not trying to SHOW your partner how TURNED-ON you are, you can actually be authentically turned-on.

Having an orgasm with another human being takes a bit of that ol' vulnerability. You have to let that steel guard down, sister.

It took me a while to get where I am today. For years, I didn't trust that my partner enjoyed sexually pleasing me, so I figured I would just fake it until I made it. But I never made it. Until I stopped faking it. This is actually true in all aspects of my life, not just sex. Things started to come to fruition when I stopped trying to CONTROL everything, and bestowed a bit of trust upon the universe.

You know what the best thing I've learned since I've crossed over to the real orgasm side? Orgasms are like snowflakes; no two are the same. An orgasm isn't just an orgasm. There is a whole gamut of multi-faceted, dynamic, ever-changing orgasms a woman will experience in her lifetime.

I feel like now is the time to honor this new phase of my life, by telling you about the 10 REAL orgasms I've experienced.

And no matter what kind of orgasms you're having, remember girls: ALWAYS honor the O.

Oh, there is just something so incredible about having sex while high. It only works if your partner is high, too, and since I tend to go for type-A "grown-ups"  who detest feeling "out of control," it's rare I get to indulge in stoned sex. (Feel bad for me! Life is hard!)

But the few times I've done it, oh honey, it's been memorable. Your senses are just heightened when you're blitzed. Maybe it's just the weed playing with your pretty little head, but it feels like two stoned bodies can connect on a very surreal, deep level if they're grooving in sexual sync.

And when you have high orgasms, it's as if time suddenly s-l-o-w-s down. You feel every beat of the orgasm. It's full-body chills. It's intense without being breathless or overpowering. It's a calm, slow-paced intensity that can only happen when you're flying HIGH in the sky.

Can you tell I've just recently rediscovered the beauty of sweet Mary Jane?

Have you ever had a mind-blowing orgasm that's so powerful, it's as if every pore in your body has opened up and your skin is just too damn sensitive? It's like a mild touch on the arm is an irritating, unwanted scratch with acrylic nails.

I like to call this the "Don't f*cking TOUCH me" orgasm, because even a light graze of your partner's hand just feels awful. You came, you saw, and you conquered, and now you just NEED A F*CKING MINUTE TO REGROUP before you're re-groped.

And really? That's it? That's all ya got, buddy? So much build-up, only to be left with a cheap shudder that lasted half-a-second. The outcome didn't match the foreplay.

This one usually leaves you reeling in a sh*t mood. It's like going all the way to Disneyland only to find out Snow White retired.

This kind of orgasm is in a sub-category of orgasms that I like to call "epiphany" orgasms. Epiphany orgasms are when you have a great, life-changing realization as you're coming. It's a double whammy. They're rare, but you will never forget an epiphany orgasm.

The "HOLY SH*T, I LOVE YOU" orgasm is when you realize you're deep in the throes of love with your partner right as you're coming. It's intense because you're caught up in the ecstasy of lust but you feel love rear its complex head in the same moment. While this is a memorable orgasm, it's also a dangerous one. Because, in the heat of the moment, you might not be able to help but shout "I LOVE YOU."

And no one wants to say those three scary words for the first time, mid-orgasm.

It's embarrassing. I had a friend who blurted "I love you" mid-orgasm, and it took her years to recover. (By "friend," I mean me).

This is also an epiphany orgasm.

The hate orgasm often happens when you're f*cking an ex, or your boss, or a f*ckboy or f*ckgirl you know is bad for you. Maybe you had a few drinks and made a poor judgment call, and right as you're coming, you realize: "I hate you, mother f*cker."

But hey, hate-f*cking is a thing. Sex is all about releasing a massive buildup of emotions, so the "hate orgasm" can be pretty damn satisfying. It's a nice outlet for all of the pent-up feelings you've been harboring. I mean once you let your body release an orgasm, it only make sense that all your buried emotions will be released with it.

No one wants to fess up, but we've all been guilty of the guilty orgasm. All. Of. Us.

This orgasm is when you have a spine-tingling, earth-shattering, ground-breaking orgasm, followed by a huge pang of guilt. And where does all that guilt come from? The fact that you, sweet darling, were thinking about SOMEONE who isn't your partner when you CAME.

TMI: I used to have guilt orgasms all the time, back when I pretended to be "straight." I would be with a guy (gag), and shut my eyes, and pretend I was with a hot girl. But hey, at least I came. Tell yourself that when you feel riddled with guilt. AT LEAST YOU CAME. Gold star for you!

OK, so you and BAE are having sex. And your babe is about to come, and you want to come in unison with your partner. I mean, what's more loving and special than coming at the same time as your partner?

Except you're not there yet. But BAE is. So you decide to take matters into your own hands, literally. Except it's low-key. You go for a little play time on the sly. After all, you don't want to bruise the frail ego of your partner. You want to tell him or her it happened because you're so f*cking "connected" (not because you touched yourself in secret).

Oh, the unexpected orgasm. It's as equally jarring as it is thrilling. Maybe you're in the middle of a not-so-exciting hookup, and suddenly, BAM, you're coming, and you're coming strong.

Sometimes it can happen when you're not even hooking up. It happens to a friend of mine at the gym when she's running on the treadmill. Mid-sprint, she will just orgasm, in New York Sports Club, in front of everyone. (This "friend" isn't me this time. If it was, I would be in far better shape).

9. The little orgasm that could

This is the most important epiphany orgasm in the books. It happened to me some time in my junior year of high school.

You're hooking up with a girl. Maybe you're a little tossed at a party and have found yourself holed up (no pun intended, you dirty slut!) in a private room with this girl. You've thought you were gay for awhile, but you've never reallllly been sure.

And suddenly, you're coming, baby. You're COMING. And as you're coming, you have a sobering realization. A moment of acute clarity: Holy f*ck. I'm gay. Totally. F*cking. Gay.

Now you've just got to figure out a way to tell your boyfriend, OOPZ.