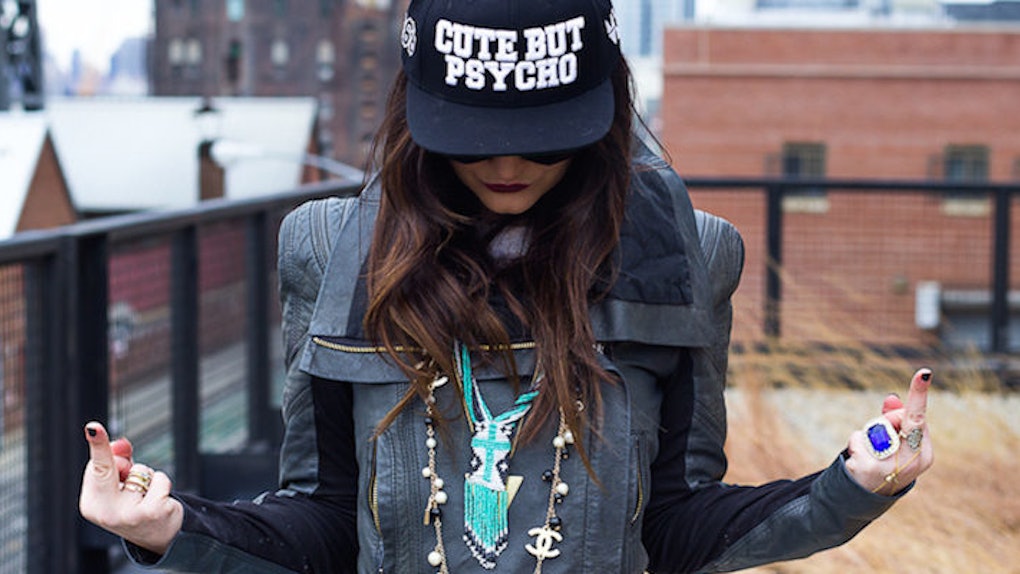 I'm not going to lie: Sometimes, I look sort of bonkers.

I pound into a room in loud, platform boots, and the wings of my eyeliner are so massive, I'm surprised I don't fly away. I also wear oxblood lipstick during the day, and I draw a constellation of freckles across the bridge of my nose because I think it looks cute.

People with a subtler aesthetic often think I'm crazy. And since I'm not one of those girls who is appalled by the word "crazy" (I think it's sort of glam), I went with it.

And while I'm pretty shy, I'm also wildly eccentric once you get to know me. I have zero fears when it comes to talking about the highs and lows of my sex life, my mental health issues, my sexuality and the radical ideas that swirl through my brain.

"You're so crazy, Zara! I can't believe you wrote about throwing up on a dick on the internet!" my friends constantly tell me.

And then, I found myself in a relationship with a girl (we'll call her Conservative Cathy), who always turned red in the cheeks when I talked about my panic attacks and my embarrassing sex fails.

She would try to force me to change my clothes when I wanted to wear a pink, cropped, faux fur jacket (super chic by the way) to the bar.

"You're fucking crazy!" Cathy would yell at me during one of our notorious screaming matches.

"This is just me!" I yelled back so often, it became my battlecry.

I know this is a boring cliché, but if someone calls you something long enough, you actually begin to believe it.

If someone calls you something long enough, you actually begin to believe it.

So after a while, I began to believe I wasn't just an individual with her own sense of style — I was crazy. And not a glamorous crazy, but a damaged and deranged crazy.

It wasn't just about my clothes and outspoken nature anymore. The belief that I was actually crazy trickled down into all of my thoughts and feelings.

Cathy even began using her affection as a manipulative tool to make me upset.

"You haven't been affectionate with me all day," I would chirp, playfully nudging her arm.

She would immediately push my arm away and growl, "You're so crazy. You're way too needy. You need help."

I even started saying really reductive things about myself, like, "Oh, I'm CRAZY. I don't know how she puts up with me!" when I only wanted to stay an hour later at the bar on a Friday night.

Then, one evening, we were lying and watching "Blackfish," a documentary about the abuse of whales at SeaWorld.

Now, I'm a hardcore animal lover, so naturally, I was heartbroken by the documentary. Tears ran down my face, and I was haunted by the images of animal abuse for the rest of the night.

If your partner says you're 'crazy' for having feelings, then they are the ones acting crazy, not you.

And like clockwork, Cathy said to me, "It was just a documentary. You're acting crazy again."

That was the day it hit me: She had always called me crazy, but really, she was the one that was totally nuts.

If you're having an emotional reaction to anything — a documentary, a life event, a family crisis or even a moving commercial — and your partner says you're "crazy" for having feelings, then they are the ones acting crazy, not you.

And if someone calls you crazy because of your style, that's crazy, too. I won't sugar coat this for you: It's totally illogical and downright nasty to insinuate someone is mentally unstable because of the way they express themselves.

I've been doing the relationship song and dance for a long time, and 90 percent of the time, if someone is always accusing you of something or calling you a certain name, they possess the very quality they're accusing you of having.

This logic applies to the word "crazy" especially. Women, in particular, are written off as crazy for merely disagreeing with their partners.

So if you're currently feeling stuck in this dynamic, being called "crazy," "nuts" or "unstable" by your partner, I want you to take a step back, babes.

Look at your relationship through a wider lens. When you're so near your partner all the time, you're too close to gain any real perspective.

After taking a step back, I want you to ask yourself a pretty jarring question: Is my partner calling me crazy all the time?

If your answer is yes, then I will boldly say you're not the crazy one. Even if you do struggle with mental health issues, no one who really loves you and who is stable themselves would ever call you that.

Remember, eccentricity, personal style and being unafraid to voice your opinions is not crazy. In fact, all of those things are pretty spectacular.

Eccentricity, personal style and being unafraid to voice your opinions is not crazy.

It's important you find a person who won't reduce your fabulousness to being crazy just because they're threatened by your light. Your partner should embrace your fire, not try to put it out.

So now that we've established you're not the crazy one in your relationship, it's time to step out of this toxic dynamic and gracefully run for the hills.

And if you're afraid, please know we only have so much space in our lives. And the person calling you crazy is taking up a lot of space. Imagine what kind of wondrous new things could fill that empty void?

At the end of the day, letting go of the negative will always leave a fresh, open spot for the positive.