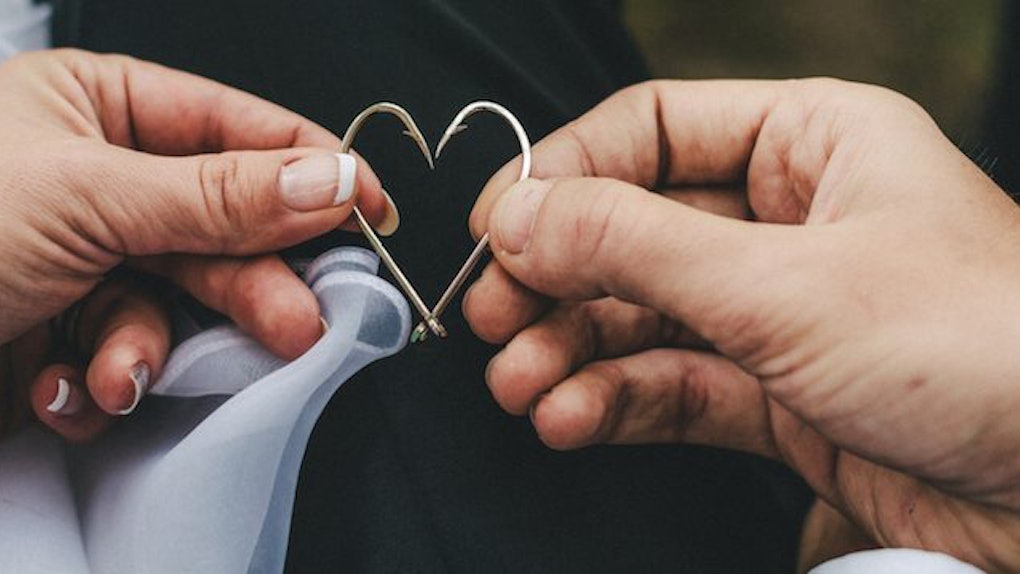 My boyfriend, Mehdi, and I have been together for three years. After six months, we moved in together. Two years later, we were splitting holidays. And just last month, we got a puppy.

This is our dog, Linda.

In becoming a sex and dating writer, I've come across so many different kinds of relationships, dating quirks, fascinating sex experiences and bizarre couples' habits I never even knew existed.

It gets a girl thinking, "What does my boyfriend really think of me and our relationship?"

What does my boyfriend really think of me and our relationship?

Well, ask and you'll receive. Here you'll find my boyfriend's honest, hilarious, boring and sweet answers to some pretty harrowing (and not so harrowing) relationship questions.

Jamie LeeLo: Did you think I was easy when we met?

Mehdi Barakchian: No, why would I think you were easy?

I don't know. We had sex pretty quick.

No, I thought we hit it off! I didn't think it was an easy thing. Also, like, what's easy? If you're not into each other and you have sex, like, just for the sex?

Do you really notice if I don't shave my vagina?

I don't think so.

You don't take note of that?

What's a bad habit I have you don't think I've noticed?

I call you out on that shit all the time... It's got to be, like, a bathroom/shower/tissue situation.

You used to put your feet up on the fucking coffee table while I was eating, and that was a hard stop. That's breaks all the way. I guess we're finding out I don't pay attention to you.

What was your first impression of me?

I was like, you're one of those girls who is super tough, confident, had her shit together, was funny and would make eye contact. And I was just like, "She's bad," in a good way. "She's not just some girl you can talk to and be like 'hey, what's up'... this is a girl you have to win her respect."

I remember the moment I met you. I was like, "She's one of these girls you have to bring your boxing gloves with."

She's one of these girls you have to bring your boxing gloves with.

What's one of the things you would change about me?

You don't want me to say this.

You're going to want a different answer... That you care about what other people think. I hate that about you. Or I hate what it does to you.

But it's getting better!

It is! This past year has been way better.

What is something you've kept from your family about me?

What is something I do that turns you off? Farting and burping?

Yeah, the farting is a real buzzkill, a REAL buzzkill. Or if I'm eating, and you're blowing your nose, and I'm just like, "What are you doing right now? I'm eating! This isn't the time for it. Go somewhere else and do it." You'll fart in the room when the bathroom is right there.

Who do you vent to about me?

No one. And that's crazy to think about. But I don't think I've ever vented about a girlfriend unless the relationship is on the way out.

I don't think I've ever vented about a girlfriend unless the relationship is on the way out.

What are three words that describe sex with me?

Fun, intimate... I want to give you a good one. I'm visualizing us having sex. Anything I'm going to say is going to be wrong.

When did you know you were in love with me?

I wasn't, like, hit by it... I knew I was ready to do everything with you pretty quickly. I think it was once we decided we were going to tell people we were dating.

[Editor's note: This is literally the cutest thing we've ever read.]

What tipped you off that I was serious about you?

I know it would make me feel really special when you came in to see me at work. A few times, you would pop in just to see me, and it would change my day so much.

My day would go from mediocre or shitty to awesome. I'd be like, "She's here!" and if you stopped to talk [to] someone else, I'd be like, "I'm waiting for you to come say hi to me."

Have you ever doubted us being together?

How am I different now from when we met?

We're less outgoing. We're way more homebodies. We slowed down a lot. It used to be a lot more OUT 'TIL THE SUN COMES UP.

Am I the best sex you ever had?

Can you think of the best sex we ever had?

It's so crazy to think back on sex... I can't. Maybe on the floor in your bedroom?

What is the last lie you told me?

What would I lie about... probably if I should have another drink. Like, if you ask me if I'm buzzed, and I'm like, "Not really!" and try to dance around it.

When was the last time you were jealous?

When we first started dating.

And it would just annoy you if I talked to other people?

I was weird about you being such good friends with Tom*. That was the only jealously. Seeing you guys interact once, I was like, "Oh, they are really close."

When do you find me most attractive?

When you get really done up... I think you're really pretty with big hair. I notice it sometimes when we're on our way out, and all of a sudden, you just pop.

I think it's something you do with your eyes and your eyeshadow, something about it makes you pop, almost like a cartoon, but in a really pretty way. It's like you suddenly have so much color to you. It's loud, but not in a goofy way.

Do you believe we're soulmates?

One hundred percent. If you aren't my soulmate, soulmates don't exist.

If you aren't my soulmate, soulmates don't exist.