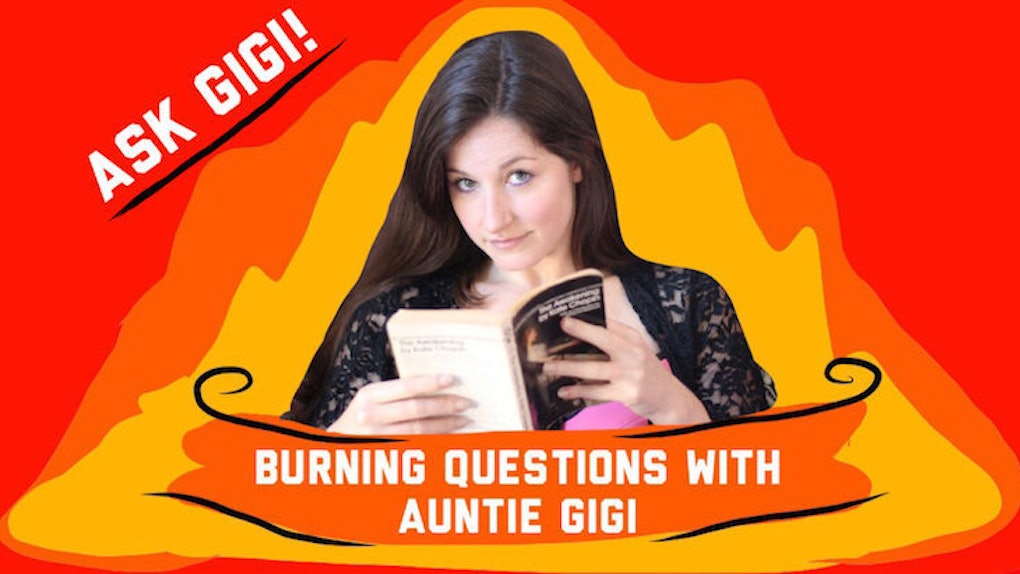 Ask Auntie Gigi: How Can I Have An Orgasm During Sex?

Sexual health and wellness is extremely important in healthy relationships. But it's often a taboo topic. Auntie Gigi is on a mission to overcome the stigma and help you become the most informed, sexually knowledgeable person you can be.

Information is the key to sexual satisfaction and Auntie Gigi is here to help!

Question from the reader:

I have only ever had orgasms during oral sex. I want to be able to have one during sex, but I don't know how. What's the best position to get off? How long does it usually take?

You are not alone, mama. So many women are in this exact same position. In fact, you are in the majority. Only one in three women are able to achieve a vaginal orgasm.

This is just a medical fact. So before you go beating yourself up about not coming your face off to the “aggravation and dismay” of your partner (LOL, no), just remember that you are NORMAL.

Sex is a complicated and intricate art. A guy simply shoving his dick into your lady hole and seizing on top of your body for eight to 10 minutes is not going to produce an orgasm. It just won't.

Rug burn, maybe, but not an orgasm.

The female body is more complicated than that sh*t. For most men, it is an enigma, and they have no f*cking idea what to even do with it. It is not YOUR fault you're not coming; it is the fault of the lack of sex education that we're given in this stupid-ass world.

How can a guy know what to do when he's never been told?

For men, it's as simple as getting his dick wet to get off. He doesn't know any better. I am physically rolling my f*cking eyes right now because of how much this frustrates me. Trust me, babe, I am so over men not knowing how to pleasure women during sex. It so BORING.

OK, rant over. Let's move on to solutions.

When a guy is going down on you, you don't really have to do much. You get to just lie there (or kneel, depending on your position) and focus on what is happening to your body. As I am sure you're aware, it takes serious concentration to come. You have to be committed to that sh*t.

Men are always saying they have to think of terrorism and cancer so they WON'T come. Well, women are over here doing everything we can to THINK about anything we can TO come. That way, you're not focused on anything other than yourself when he's going down on you.

While you shouldn't worry about this because you're a f*cking sexy b*tch and your partner is lucky AF to get to have the sex with you, we all get self-conscious.

I'm not saying some of us don't have insecurities during oral. I mean, all of us have wondered if we smell or taste bad (you don't, I promise). But it's an opportunity to close your eyes, focus and pretend you're being double teamed by Idris Elba and that banging guy from "Outlander." You know?

The last and most IMPORTANT reason is CLITORAL STIMULATION. These are two of my favorite f*cking words, my angel child. Most women don't casually like clitoral stimulation; the vast majority of us are not just “big fans” of having our clits sucked. NAH, son. WE REQUIRE THAT SH*T. It is MANDATORY in order to have a vaginal orgasm.

Which brings me to my next point: During sex, the clitoris is rarely stimulated properly -- and certainly not consistently enough to produce an orgasm.

So, your REAL QUESTION IS: How the F*CK do you get your goddamn clit stimulated during sexual intercourse so you can come?

Before we get into positions, which I know y'all are jonesing for, I want to f*cking say something: YOU DO NOT HAVE TO FEEL BAD ABOUT WANTING TO TOUCH YOUR CLIT OR HAVING YOUR CLIT TOUCHED. OK?! OK.

Here are tips, straight from the Auntie Gigi vault -- which is not a vault at all, because I gladly will share all of my knowledge with you.

Here are three of the best positions to get at that clit.

Every big sex magazine and website is always saying you should be on top to come.

Why? Because you can reach down and get at that clit without too much blockage, and you can grind your clit against the D.

With that being said, being on top is a lot of f*cking work. For some, it's too much work to come. Like, how am I supposed to have an orgasm when my thighs are burning and I'm focusing on not dying of a heart attack?

I am a shameless pillow princess. I recently wrote an article about this, which you can find here. If you too find the cardio of cowgirl to be too f*cking much, read it and learn a few things. It has saved me on many occasions.

My favorite way to alleviate the arm burn and general sweatiness of being on top is the lotus. When you're on top, have your boyfriend sit up so you're facing each other.

There isn't much thrusting in this position, but you can easily reach down and rub your clit or have your boyfriend do so. It's very easy on the bod, and it's intimate as f*ck. You can passionately make out, AND he has great access to your nips. Love me some nip stimulation, ya feel me?

If he tries to move so he can do all the thrusting, tell him this is YOUR time and you need to focus, so he needs to STFU for once.

I don't know about you guys, but I can't come in the classic spooning position. It feels like there isn't even a dick in my poon hole because it's shallow. It freaks me out. Plus, you can't even get at your clit because your legs are closed.

While this lazy sex position can be fun when you have zero energy, it is not going to get you off.

So try the adjusted spoon. Instead of lying on your side, swing one leg over your partner so he is still astride, but your legs are spread. He can go ahead and thrust away and be merry, and you can go to town on yourself.

Bring in a toy if you'd like. A small, palm-sized vibe will get you where you need to go in no time. If your man is not down (he's a wimp, but that is another conversation for another day), just use your fingers.

This is a slight alteration to the classic missionary position. Anyone who said missionary is not the greatest wasn't doing it right.

The problem is that you can't get your clit because in order to do so, your man needs to be elevated over you, which can be really exhausting.

Save him the pain by putting your legs over his shoulders. He can rest on you, and you get unlimited access to your clit. It's a win-win for the both of you.

I hope all of this helps. Go put on Lemonade, channel your badass inner sex goddess and get yourself that big O tonight, baby.

Yours in lust, XOXO Auntie Gigi

For sex questions and inquires, please send an email to askgigi@elitedaily.com