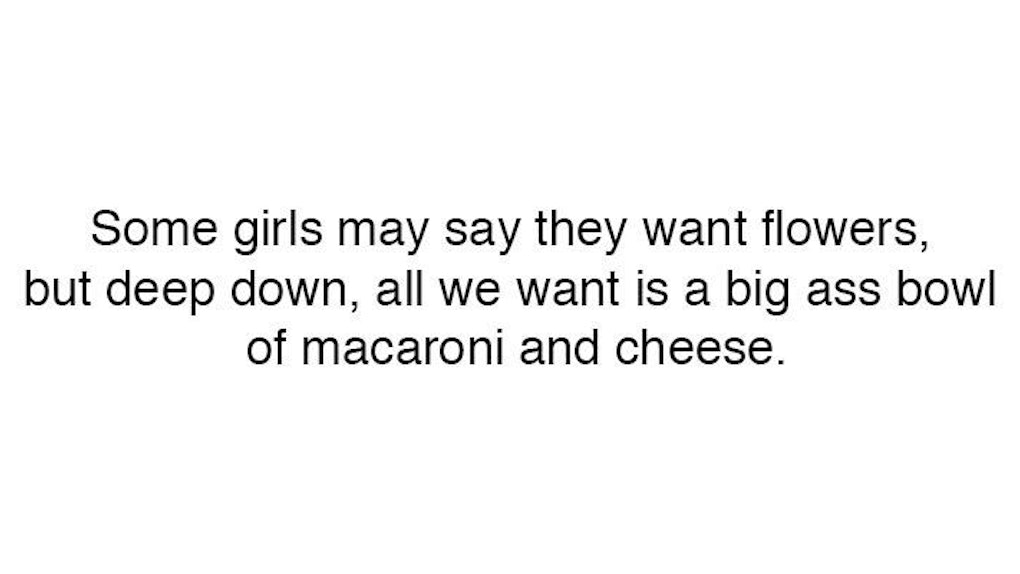 Food > Love: 48 Reasons Why I'd Rather You Feed Me Than Flirt With Me

We've all heard the saying that the way to a man's heart is through his stomach. I'm not sure why females were excluded from the receiving end of this saying -- I really couldn't care less about what a man is eating.

I mean, I'm much more concerned about my next meal, and while I'm eating that meal, I'm just thinking of what to snack on next.

Whoever came up with this phrase must have been unfamiliar with Shake Shack and every other restaurant under the sun that females can't get enough of.

Some girls may say they want flowers, but deep down, all we want is a big ass bowl of macaroni and cheese that we don't have to prepare or clean up ourselves.

Is there anything better than having someone cater each meal to you? Isn't it much more important to have someone in your life who understands how important eating is to you than anything else?

I couldn't care less if you remember my birthday, just as long as you're preparing my meals every damn day. Sure, that may sound bratty -- and I'd probably kick your ass if you forgot my birthday -- but if it means letting you off the hook for certain things, isn't it worth it?

I think you get my point. At least I hope so.

So what exactly goes on in the mind of a chick who prefers food over, well, anything else?

1. I'd rather you feed me than flirt with me.

2. I'd rather you cook for me than cuddle with me.

3. I'd rather you please me in the kitchen than the bedroom.

5. I'd rather you get me take-out than talk to me.

6. I'd rather you feed my stomach than feed my soul.

7. I'd rather fight over a restaurant than fight about children.

8. I'd rather you feed me sweets than sweet-talk me to bed.

10. I'd rather you boil me pasta than make my blood boil.

11. I'd rather spoon some ice cream than spoon you.

12. I'd rather you add toppings than take my top off.

13. I'd rather you tease me with dessert than sex.

14. I'd rather fill my belly than fill my eyes with tears.

15. I'd rather you steam me vegetables than make it steamy in the bedroom.

16. I'd rather open up a jar of peanut butter than open up my heart.

17. I'd rather eat the crust than give away my trust.

18. I'd rather you share your meal than your bed with me.

19. I'd rather dine solo than meet my soulmate.

20. I'd rather eat linguine than wear lingerie.

22. I’d rather pop corn than you pop the question.

23. I'd rather wait for my Seamless to get here than wait on you.

25. I'd rather make a meal out of my wine than whine over you.

26. I'd rather eat soap than have you spoon-feed me lies.

27. I’d rather have a food baby than an actual baby.

28. I’d rather go up for seconds than think about your sloppy seconds.

31. I’d rather eat the contents of my fridge than wait for you to turn cold.

32. I’d rather eat my dessert than have you desert me.

33. I’d rather have ice cream than a screaming match.

34. I’d rather swallow something delicious than swallow my pride.

35. I'd rather get a grilled cheese than get grilled by you at the bar.

36. I’d rather take a bite than get any more bitter.

37. I’d rather take care of my stomach than nurse your ego.

38. I’d rather get pan-fried anything than think about how we’re going to pan out

39. I’d rather have curry than worry about your lack of spice in the boudoir.

40. I'd rather go back for thirds than beg for a second of your time.

42. I’d rather get what I ordered than never know what to expect.

45. I'd rather you literally fill me than emotionally fulfill me.

46. I'd rather you give me a piece of pizza than a piece of your mind.

47. I'd rather have garlic breath than deal with your morning breath.

48. I’d rather count calories than count on you.