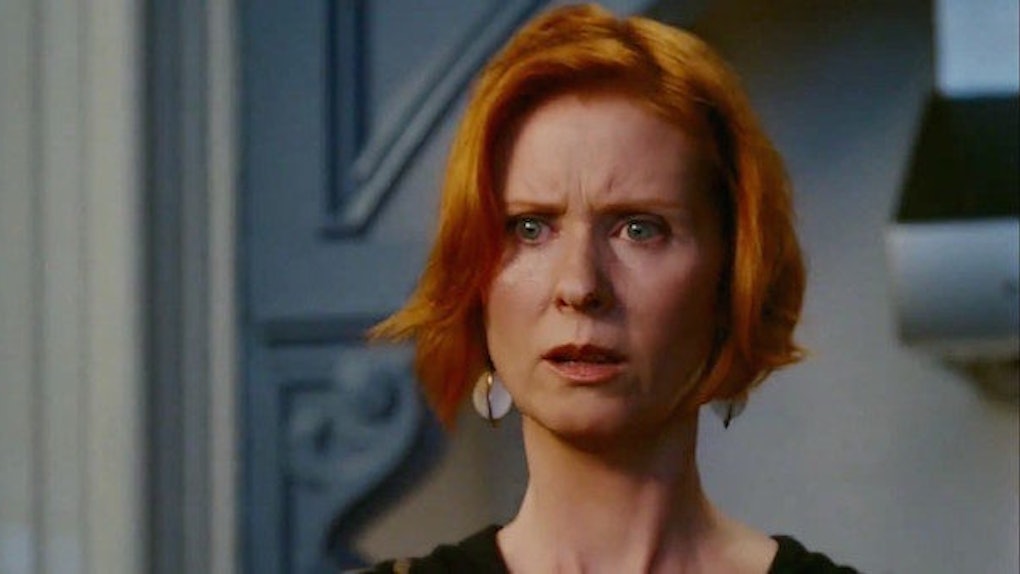 "Sex and the City" is a television show that needs no introduction. The fact that it’s been over 10 years and we’re still talking about it is a testament to the show’s immensely clever writing and well-developed characters.

We feel so connected to the cast of the show that groups of women dissect who they most resemble in their pack of friends. “I’m Charlotte,” says your pristine, hopeless romantic best friend who lives on the Upper East Side. You can even buy the t-shirt to confirm it to the world.

There was always one character, however, who none of us really wanted to be: The Miranda.

Miranda Hobbes' lack of conventional looks plus terrible fashion plus curmudgeonly sense of humor was not something single, sassy 20- and 30-somethings desired to be compared to.

All my life and with many different friend groups, whenever we play the Which "SATC" Character Are You Game? I am ALWAYS smacked with "you're sooooo the Miranda."

For a long time I had mixed feelings about this. As Ali Barthwell aptly explains in her 7 Most Messed-Up Things About "Sex and The City" Vulture essay, “successful Miranda is supposed to be the least cool friend.”

She’s a sarcastic bitch to be sure (which I actually love and think is hilarious), but as Barthwell points out, “Miranda ended up being one of the only women in television history to truly have it all.”

Despite some adult braces and bad haircuts, Miranda really was the coolest, most grounded of the bunch. Whereas Samantha was defined by her sexual exploits, Miranda was empowered by them.

While Carrie blew her money on shoes, Miranda was making bank as a high-powered lawyer. And as Charlotte succumbed to letting a man take care of her, Miranda maintained her independence with Steve.

The Mirandas of the world are great friends, executives, comedians and lovers. We’re a witty bunch that is not afraid to tell it like it is. It’s time we unconventional women embraced our inner Miranda-girl.

If loving doughnuts and intelligent conversation and watching trashy television dramas and hating other people’s babies makes me a Miranda, well then I’m proud.

Don’t fight it like you normally do everything else. This isn’t a Steve mercy f*ck. Here are the 14 signs that you are the Miranda of your group:

1. You stick up to guys for your friends

Miranda is fiercely protective of her posse and doesn’t hesitate to defend her friends -- especially if they’ve been hurt by a man.

You won’t stand idly by as your friend gets her heart broken again by Mr. Big or ticketed for smoking weed. We need more people like you around.

2. You can make fun of yourself

You have a self-deprecating humor that makes others instantly comfortable around you. From laughing at your dry spell to eating cake out of the trash, you never take yourself quite too seriously.

Even if you move all the way to the other end of the earth -- Brooklyn -- you’ll never miss a friend's dinner or phone call.

4. You are the voice of reason and the only one who makes sense

You’re not about to jet off with a Russian whom you barely know or live in a fantasy world of glazed bowls. Miranda’s is the only storyline that could actually be plausible in real life.

5. People go to you when they want honesty

You aren’t afraid to tell it like it is, even if the truth hurts. (Hey, she’s a lawyer!) Keeping it real is your number-one speciality, even when it comes to your own happy ending.

6. You care more about making a raise than making brunch

...But you do a really good job of balancing the two. #Priorities.

7. You aren’t afraid to ask for what you want

You make the tough decision to keep a baby with your one-night-stand-turned-ex-boyfriend, no strings attached. You are direct in bed.

You don’t allow other people to stand in your way. And if that makes you a bitch, well, you aren’t afraid of that label either.

8. You have the best one-liners of the bunch

You love being a sarcastic troll. It’s funny! And those who love you, love your brand of humor.

9. You singlehandedly brought the women’s power suit back

Fashion was never really your strong suit. But you just don’t know it yet.

10. People call you a pessimist, but you’re never disappointed

You're not a pessimist -- you're just cynical. You only give love to those who deserve it -- like a sandwich (both real and costumed) and Krispy Kremes.

11. You always go the non-traditional route

Whether it’s getting married in a small park or adult braces, you really are your own person.

12. You are comfortable with your sexuality

You have no problem being a sexual woman and being upfront with your partner. Sex is a big part of your lifestyle... duh.

13. You listen to other people’s problems more than you talk about your own

Even when you have monumental problems -- chlamydia, lazy ovaries, a terrible haircut for six seasons -- you put them on the back-burner when others need you.

Just one to deflower you.