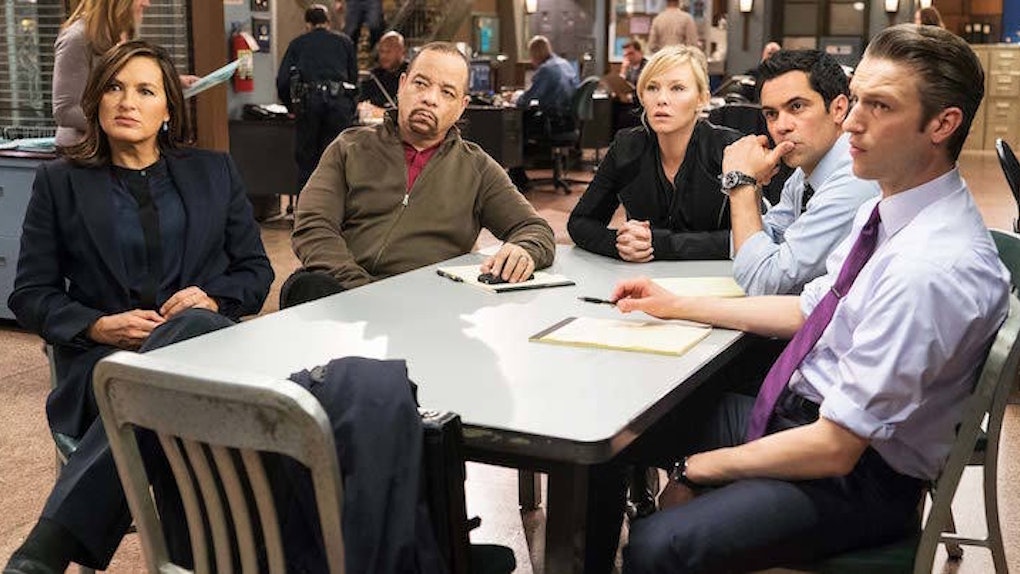 The 24 Reasons Why Every Woman Loves 'Law And Order: SVU'

"Law & Order: SVU" has garnered a cult following that seems to be primarily composed of women. Boyfriends across the world can testify to this fact, as they are continuously forced to binge watch episodes with their girlfriends on USA.

Regardless, we women love SVU. We love the drama and we love the intensity, but mostly, we love talking along with the introduction: "The dedicated detectives who investigate these vicious felonies are members of an elite squad known as the Special Victims Unit. These are their stories. (*DUN DUN*)"

It means you're a f*cking badass and a force to be reckoned with, Olivia!

2. It's all the comfort you need at night

Who needs to leave their apartment to enjoy the amount of comfort staying in and watching "SVU" ensures?

Hilary Duff appeared during season 10. Jessica Walter, aka the matriarch from "Arrested Development," had a role as an attorney in 2009. Hayden Panettiere appeared as a child back in 2001, and Amanda Seyfried made her debut in 2004. The list goes on and on and on.

4. Stabler is banging and sometimes takes off his shirt

That's when you know it's a really, really good episode.

5. It reinforces our decisions to take taxis at night

How many episodes involve a girl walking home alone in the middle of the night?

6. You can pop in at any episode

It doesn't matter if this is your first, fifth or fifteenth episode; you can jump into the season at any point. There is somewhat of a plot line, but it's not one of those series that you have to see every preceding episode to understand the one you're currently watching.

The majority of the time, the bad guy is paying the price for whatever atrocious crime he or she committed. You aren't left unsatisfied after devoting an hour to watching the program.

8. Stabler and Benson are an epic power couple

The chemistry is effortless!

9. Story lines are pulled from the news

The Duke lacrosse scandal, the Jerry Sandusky scandal and the Anna Nicole Smith death mystery were all story lines that have had episodes dedicated to them.

10. It's the best pre-sleep television show

There's nothing quite as relaxing as falling asleep to the voices of your favorite characters. Chances are you've probably seen this episode, anyway, so you don't feel guilty about ducking out early.

11. You feel smart watching it

You really feel as if you know something about police work and the legal system, even though you haven't taken a political science class in your entire life.

12. It's the perfect show to stay in on a Saturday night to watch

Grab the wine and grab your bestie because the two of you aren't going anywhere for hours.

Don't we all need one of these in our lives? Who better than the successful and strong Detective Benson?

14. You can watch a marathon without getting sick of it

You started your marathon at 11 am, and before you know it, it's 7 pm. You ask yourself where the time has gone as you dive into another episode.

15. No dull moments, which is perfect for our ADD selves

Millennials have a difficult time paying much attention to anything. "SVU" always has a new twist or turn keeping us on the edge of our seats, or more likely, our beds.

16. Serves as a great response to: "What's your favorite TV show?"

Who are you going to respect more: the girl whose favorite program is "The Bachelor" or the one who loves "SVU"? Exactly.

17. Guys think it's cooler than any Bravo program you could force them to watch

Your boyfriend or FWB will instantaneously think you are a much cooler girl for not falling into the trap of reality TV shows.

The only stability in my life is knowing that I can come home from work and have an episode of "SVU" waiting for me.

It's hard to find a program you feel completely comfortable watching with your parents. I tried doing this with "Nip/Tuck," but that was clearly short-lived.

20. It basically teaches us the safety rules of NYC

Walking through Central Park alone in the dark? I think not.

It's filled with drama! It's a guaranteed hour well-spent. That's why we keep coming back for more.

How many seasons are there now? Fourteen? Fifteen? Twenty? Who knows! But there are over 500 episodes to chose from.

23. It's literally always on

Have you ever turned on your TV and not seen "Law & Order" playing on at least one channel? There's, like, a 75 percent chance that if you turn on USA at any given time, "SVU" will be playing.

24. It gives you something to bond over with other people

There's a unique understanding between people who are addicted to "Law & Order." This creates a special bond because you know the next time you want to stay in for a marathon, all you have to do is call this new friend.