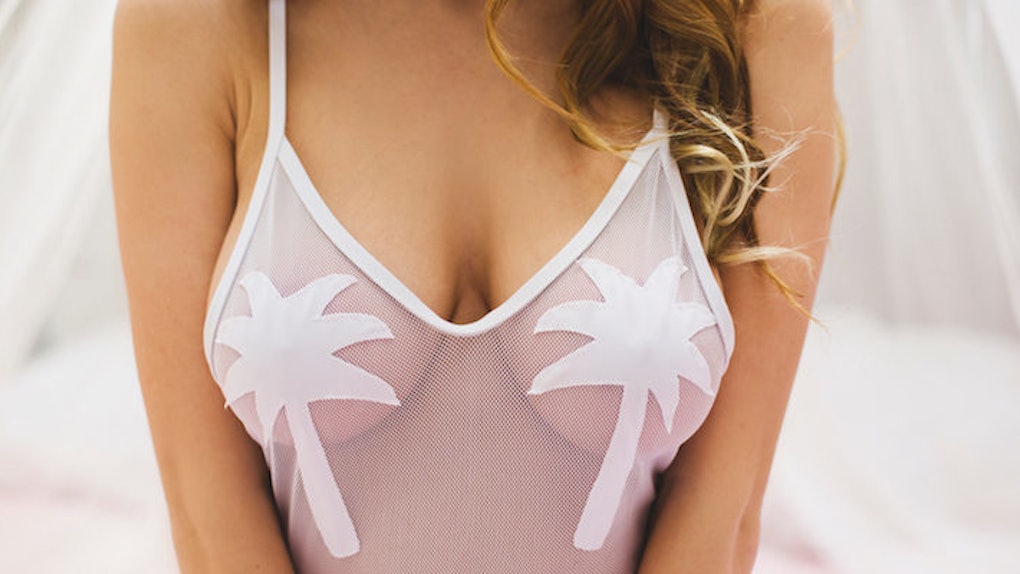 My co-worker unbuttoned her denim jacket, showing off the graphic tank she was wearing underneath.

“You're not wearing one now?” I asked, trying not to stare at her nipples.

“Nope,” she replied, grinning. “I only ever wear a sports bra to work out. To work, I don't even bother."

You know how it feels to find out a friend has been keeping a secret for weeks? That's where I was at. I'm a girl with boobs, so shouldn't I have realized my co-worker was low-key freeing the nip?

I was mystified, but gave it a try when I returned home that evening. Taking off my 36C bra and venturing outside to walk my dog, I felt very naked underneath my clothes. My dog, Chloe, didn't seem to care much about it.

At that moment, I resolved to go braless for five days. Then, I worried over the decision.

My co-worker has, by her own admission, small boobs. She's not acquainted with under-boob sweat, persistent jiggle or back pain from schlepping two cantaloupes around. For busty girls, going braless is the equivalent of going naked.

I don't claim to own Pam Anderson-level boobs -- I'm actually under 34DD, the national average for bra size. My girls, however, have a tendency to do their own thing, popping out of low-cut shirts and avoiding any restraint. These C-cups can't be tamed.

Still, I was feeling inspired and too lazy to do my lingerie laundry. So, bra-less I went.

No one at work noticed, but my mother sure did.

My first foray into a bra-free world was in a giant zip-up sweatshirt, thick enough to cover my nipples going all Fetty Wap and “hey, wassup, hello”-ing everybody. The only person I told was my bra-free co-worker, who was on nipple watch duty.

I felt self-conscious, my usual stomping strut downgraded to a slink.

That evening, I headed to my mom's house. Forgetting my lack of bra, I took my hoodie off to reveal a near-transparent white shirt. The horror!

“Did you go to work like that?” she asked in a monotone voice, like she was discussing either the weather or tax season.

I decided to be a smartass right back.

She rolled her eyes at me.

“Like what?” she replied, in Russian. “Your boobs are everywhere."

I lasted all of two minutes at the gym.

When I first volunteered to go bra-free,  my co-workers warned me against going to the gym. In their estimation, I was better off only wearing a bra to the gym than not wearing one at all.

Not one to back down from a challenge, I hit up my local Blink Fitness. Skipping underwire, I wore a tight tank I hoped would prevent nip-slip on the treadmill.

The thing is, bra-less boobs never look like they do in the movies, bobbing up and down simultaneously. Mine flop and zig-zag -- if one goes up, the other goes down. It's not sexy, it just looks like there are puppies wrestling in my tank.

I felt so uncomfortable from both the jiggling and the creepy guy on the treadmill next to me that I high-tailed it back to the locker room after my two-minute jog.

At least my date thought it was hot.

After my gym encounter, I wore a low-cut top to a date with a guy I'd been seeing for a few weeks. He didn't pay any more attention to my tatas than usual. Finally, I had to say something.

“So, I'm working on this story where I don't wear a bra for a few days,” I stated, trying to sound nonchalant. I crossed my elbows over my chest for good measure.

“Oh,” he said, taking a sip of his Old Fashioned. “Are you not wearing one now?”

I didn't know whether to hug him or yell at him. I felt like one of those women that get really pissed at their live-in boyfriends when they don't notice how clean the apartment is. I was practically walking around with two headlights out.

He shrugged, finally making eye contact with the sweater puppies.

The poor guy looked flustered. I knew I wasn't making finding the “right” answer easy for him.

“I mean, they still look hot,” he finally said.

No one cares about free boobs at music festivals.

I was spending the weekend down in Florida for Okeechobee music festival. When everyone is topless in pasties, no one pays attention to one set of jiggly boobs.

Sure, my girls kind of bounced around and flailed when I danced, but none of that matters when everyone around you is drunk or high as a motha-effin' kite. I took it up a notch for Bassnectar, which called for a whole new level of slay, and visited a body glitter booth.

“I want to look like I bathed in this sh*t,” I said, pointing at the sparkliest jar of glitter goodness.

I don't know if it was the adrenaline, my Floridian tan or the fact that I'd just eaten three “special” Rice Krispies treats, but I pulled my shirt down to free my glitter-bombed nipples.

I looked like a topless fairy princess, shirt off in front of 30 thousand strangers. It was liberating. In the days that followed, I also learned there's nothing worse than trying to scrub off flecks of body glitter from your nipples.