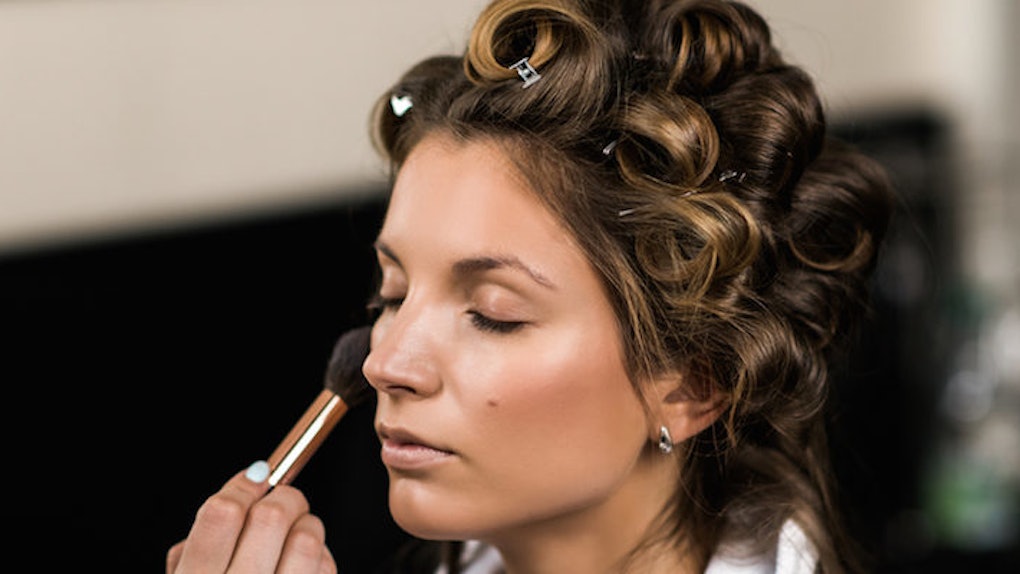 Contouring Is Teaching Us To Hate Our Faces, And It Needs To Die

Makeup has been my homeboy for as long as I can remember. I know my way around dual creases, tightlining and strobing. I don’t bleed red; I bleed NARS Super Orgasm.

Even so, I had a hard time getting used to contouring. Don’t get me wrong, I love the idea of it. Who wouldn’t be into getting a smaller nose and refined jawline without the pricetag of plastic surgery?

With the rise of Kardashian-inspired beauty and YouTube beauty vlogging, however, contouring went from a trend to a monstrosity. High school-age vloggers were telling young, impressionable viewers to heavily contour for just about everything.

Mario Dedivanovic, Kim Kardashian’s makeup artist, gushed about his client's 50-step makeup routine at a 2015 Master Class in Los Angeles. It's publicly assumed that if you aren’t contouring, you’re doing something wrong.

I contour on nights out and when I’m really feeling myself before work. But, when I’m told contouring is something I should be doing day-in and day-out, that’s not cool. I don’t like my nose, but I don’t hate it enough to spend 20 minutes drawing it on differently every morning.

Take the newest trend in contouring, tantouring. As in, contouring with a self-tanner. If you don’t want to wake up early just to chisel your cheekbones, using a somewhat more permanent self-tanner is a nifty little trick. It’ll even stay on after you remove your makeup, which can be a great selling point for the girls who refuse to go totally makeup-free.

Let's be real, though. Is it at all necessary?

First, a history lesson in contouring.

The technique dates back to the 1500s, when actors would apply chalk and soot their faces so the audience could read the emotions they were conveying better.

In the 1930s, OG makeup artist Max Factor began using shading techniques for movie stars so their faces didn’t appear too flat on-screen. In 1945, the technique was taught in his makeup school, and by the '50s, screen sirens like Audrey Hepburn, Elizabeth Taylor and Marilyn Monroe were all subtly contouring for film roles.

By the 1990s, makeup artists like Kevyn Aucoin regularly used the technique on celebrity clientele. Still, it managed to remain an industry secret.

Contouring wasn’t invented for your gym runs or morning meetings.

Contouring was never intended for general, everyday use, so why do we incorporate it into our daily makeup routine? Why is it as commonplace as winged liner, or swiping on blush? Contouring isn’t something we need, yet we act like our faces just aren’t the same without it.

The truth is this: Contouring visually restructures your entire face. It makes your nose smaller, cheekbones more prominent and jawline more pronounced.

All makeup is intended to draw attention to the parts of your face you like and hiding those you don't. Unlike eyeshadow or blush, which just add more color where you think you need it, contouring is a reminder that your bone structure is not enough and it needs to be fixed.

The scarier and more intense contouring gets, the more we want it.

A quick YouTube search for “contour tutorial” yields 845,000 results, many of which have over a million views.

Contouring has become so ingrained in our culture that when you go to get your makeup done at a cosmetics counter or beauty bar, your artist will assume that you automatically want your nose slimmed and your cheekbones more pronounced. That, to me, is terrifying.

This isn’t about how deeply makeup is ingrained in our culture -- I’ve talked about how I can barely go a day without the stuff. Contouring, on the other hand, needs to go right back in the hands of costume makeup artists on movie sets where it belongs.

It does not belong in the hands of a 14-year-old with endless access to bronzer.

It's one thing to be part of a society that values perfection and another to be engulfed in one obsessed with it. We have one of the highest plastic surgery rates in the world, with the number steadily increasing year after year. Maybe it's time we stop focusing on what's wrong with our bodies and faces and start loving what we're working with, instead.