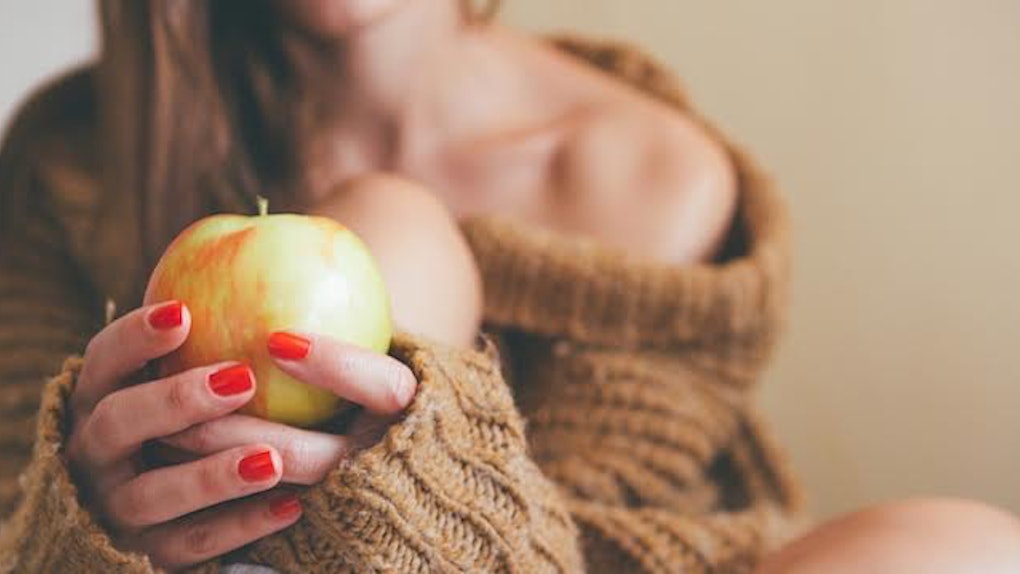 How Dry January Stopped My Toxic Relationship With Food

"I'm soooo doing dry January!" my best friend Ruba slurred to me, polishing off her fifth glass of wine.

We were at a cute little bar on the lower east side of Manhattan, feeling cozy, tucked into a velvet couch by a flickering little fireplace, safe from the cold urban tundra blustering outside.

As I emerged from the taxi, I vowed into the starless city sky to do "dry January."

"I want to do a cleanse!" I slurred to my girlfriend as I did a dramatic stumble into our West Village apartment.

She handed me a glass of water. "Drink this, or you'll be sorry in the morning."

The next morning, I woke up, feeling beyond sorry. I felt like someone had stuffed cotton balls in my skull. My tongue felt thick and foreign in my mouth.

Ugh, why do I always do this to myself? I began to spiral.

I looked at my puffy face in the bathroom mirror. Ew. That's it, I told myself. Come January 1, you're not drinking anymore, girl.

I sneered at my hideous reflection. And then I did what I always do when I'm hungover: I punished myself by only allowing myself water and a $9.00 green juice for the next 24 hours. My stomach ached with hunger around 5 pm.

You don't deserve to eat. Think of all the sugar you consumed while drinking WINE last night, my mean, bitchy self, taunted my regular self.

My regular self sighed in defeat; she wasn't as strong as my mean, bitchy self.

She hung her head. You're right. Only liquids today.

But for the rest of December, I drank like I was going to the electric chair.

"I'm doing DRY JANUARY!" I would show off to anyone who would listen, swishing my champagne around the crystal stem glass, leaning my head back and guzzling down the remaining bubbles like a real Greenwich, Connecticut lady.

And each hungover morning, I would fall into the same pattern. I would wake up feeling shitty, berate myself for being so reckless and punish myself by hyper-monitoring what went into my mouth.

Even on the few days that I skipped drinking, I couldn't eat anything without feeling sick with guilt. I wasn't worthy of nourishment, I guess.

Oh, but I was looking forward to my "cleanse," babes! I was sick of waking up with the sour aftertaste of white wine in my mouth. I was exhausted from socializing.

I couldn't eat anything without feeling sick with guilt. I wasn't worthy of nourishment.

My girlfriend agreed to do the cleanse with me, even though she's a vegetarian who doesn't ever have more than two drinks. But that's lesbian relationships for you. (Wildly supportive, or wildly codependent? I don't know, I'm just glad I'm gay.)

"This time, I'm going to do it right!" I boasted. The last time I had attempted a cleanse was a three-day juice cleanse six months prior that left me feeling really bitchy and foggy, but also really skinny.

I ordered us one of those plant-based meal-delivery programs celebrities swear by (ours was called Euphebe). It vowed to "break the crappy food cycle" through "great tasting food."

It even came with a coach that you could contact via text whenever you were feeling weak!

I was really starting to feel like Gwyneth Paltrow, which, for a girl who grew up attempting to emulate sickly '90s models, was a very new feeling.

My first three days booze-free, eating super clean, I had a roaring headache.

"Why do I feel hungover and horrible when I'm NOT EVEN DRINKING?" I roared to Ruba over the phone.

Even though those first three days I felt headachy and fatigued, there was also a huge shift in my relationship to food. I wasn't punishing myself through starvation.

I ate my super healthy, very nourishing (rather large) Gwenyth Paltrow-ish meals without feeling a trace of guilt. Who was I?

In fact, by day seven, I started to actually look forward to meals. I was being kind to my body by not destroying it with booze (I was even doing yoga!), and I was happy to honor my body through... food.

Around day 14, I felt a transformation so wild, it felt almost spiritual.

"I feel like a different person. I feel like someone who has broken free of a toxic relationship, and is discovering how fucking awesome life can be!" I chirped to my girlfriend.

I felt a transformation so wild, it felt almost spiritual.

She smiled. "You seem different."

I was different! What was all this free space in my brain I suddenly had? Where were all the creative ideas flowing out of?

Surely it was deeper than the just booze? I mean, I've been known to party in my day, but I've never felt an emotional attachment to champagne.

But you know what I had felt an emotional attachment to? My eating disorder.

And that's when I realized, Holy shit. Not drinking has helped heal my most toxic relationship of all time: my relationship to food.

I've had a deeply toxic relationship with food since I first learned how to be bulimic in the seventh grade. I was at my friend's house in super-wealthy Connecticut suburb having an innocent sleepover party when things quickly took a dark turn.

"I can show you how to vomit up your food so you can be skinny like Kate Moss," my darling friend sweetly purred, guiding me into her pale pink bathroom. It was the size of a Manhattan studio apartment.

She pulled back her thick mane with a crystal butterfly clip, hovered her little head over the porcelain toilet bowl, stuck her fingers down her throat, heaved and few times and that was it.

She had gotten rid of all the Twinkies we binged on earlier in the night.

After that, I began to purge my food a lot.

If I didn't purge my food, I restricted myself to 600 calories a day. This pattern became imprinted in routine for the next 10 years.

Even when I got older, went to therapy and addressed my issues with food head on, I've never been able to rid myself of this irrational, irrepressible, visceral feeling of guilt of every time I eat.

Instead of brainstorming creative ideas, I would brainstorm about what foods I should eat, how much I should eat and strategize well-thought out excuses on why I wouldn't be eating at the dinner party.

My obsession with food took up an unbelievable amount of brain space.

My obsession with food took up an unbelievable amount of brain space.

It was exhausting. I realize now that drinking was the only relief I had from my stifling paranoia about food. When I was drinking, I suddenly didn't give a shit about what I ate.

Alcohol made me feel pretty and invincible.

But what comes up must come down, right?

I would wake up in the morning, feeling like death, and resort back to my old habits of restricting what I ate, obsessing over what little food I was going to eat, feeling weary of the battle in my brain, drinking booze to take the edge off and BAM — the cycle would repeat itself.

Little did I ever know that it would be a brief stab at "dry January" that would get me out of this mess.

Because when I was being kind to myself and not drinking my face off every night, I suddenly had nothing to punish myself for.

In fact, waking up clear made me want to actually NICE to myself. Regular Zara got stronger than bitchy, mean Zara. Soon, regular Zara became fierce Zara.

You know when you get out of a bad relationship, and you feel suddenly sober? And you're like, "Oh my God, how did I LIVE like this? What was I thinking?"

It was my toxic relationship with food that was bringing me down.

I couldn't believe that I had let this dark, self-destructive relationship with food consume my life for so long. Just the clarity of sobriety, mixed in with the euphoria of really treating my body like the temple that it fucking is — for the first time ever — gave me the strength to walk away from my eating disorder.

I realized that when you're in a toxic relationship of any kind, the only way to break the cycle is by cutting out all of your triggers.

Sometimes your trigger for calling your shitty ex is talking to your brother on the phone who's nasty to you. Sometimes it's doing a line of cocaine with your bad influence friend. My eating disorder was triggered by my binge-drinking.

When I got rid of that trigger, I was suddenly free.

The only way to break the cycle is by cutting out all of your triggers.

Here is the thing about food, too: You can't quit food, unlike hard drugs and booze. You need to eat, or you'll die. So you might as well cultivate a healthy relationship with it.

And once you have positive feelings toward what keeps you alive, that positivity bleeds into every other aspect of your life.

So yes, I feel happier. I feel more balanced. But most of all, I have space to channel my energy into what feeds my soul, not into what starves it.