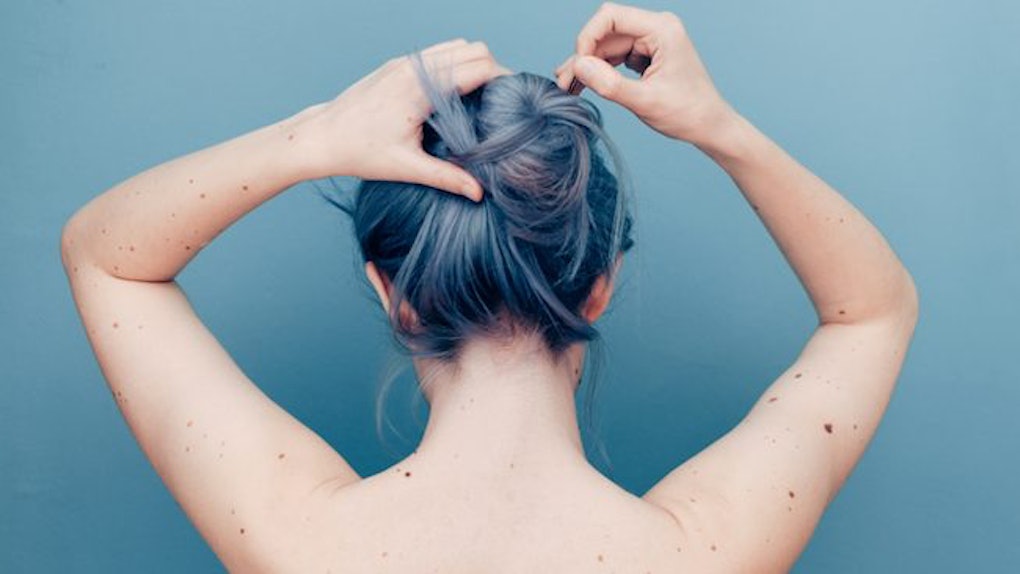 What Should A Mole Look Like? A Skin Specialist Answers All Your Need-To-Know Questions

Yes, it's always a good idea to have a professional take a look if you happen to notice a sudden mole or skin tag pop up on your body.

But there are also some guidelines you may want to follow to put your mind at ease when you're trying to decide if a mole on your skin looks "normal" or not.

First things first, you need to know about the two different types of "normal" moles.

A common mole -- one that has no cancer or precancerous cells -- develops on the skin when pigment cells (melanocytes) grow in clusters.

They can be black, pink, brown, tan, or basically the same color as your skin, and usually they are teeny tiny -- about five millimeters.

According to Dr. Michelle Yagoda, a facial plastic surgeon who specializes in mole removal, normal moles are generally "symmetrical and have even color throughout."

And, as a helpful note, The National Cancer Institute says common moles are usually even smaller than a pencil eraser.

Apparently, the average adult has somewhere between 10 to 40 common moles on areas of the skin that are most exposed to sunlight (I have at least 15 myself, but I got tired of counting).

They can be present at birth, but moles can also develop during childhood, and up until about age 40.

Common moles can develop into melanoma (aka skin cancer), but it's really rare.

As with any marks on your skin, if you notice any sudden changes -- like, if it changes height, majorly changes color, or it starts to itch or become oozy -- it may be your cue to set up an appointment with a dermatologist asap.

Another type of non-cancerous mole is called a dysplastic nevus, sometimes referred to as an atypical mole.

Plus, the more atypical moles a person has, the more likely they are to develop skin cancer.

These types of moles are generally a bit larger, and they have a more irregular texture and shape.

They can also appear to be more than one color; they kind of look like a bled-out dot of water color, as they are still relatively concentric.

These atypical moles don't necessarily need to be removed, but if you start to notice a bunch of them on your skin, definitely be sure you're on top of your sunscreen game (which you already are, right?).

Overall, the skin marks that should alarm you are the ones that are irregular in shape, asymmetrical, are generally larger than five millimeters, and change in their form -- all potential signs of melanoma.

And, if you ever have trouble remembering which red flags to look for, Dr. Yagoda has you covered.

Think A, B, C, D, E: [Potentially dangerous moles] tend to be asymmetrical, borders are irregular, color is uneven, diameter is larger than six millimeters, and they evolve in size, shape, or color (meaning the mole is changing).

Just to err on the side of caution, she advises, "if you're in doubt, check it out! If the doctor is in doubt, cut it out!"