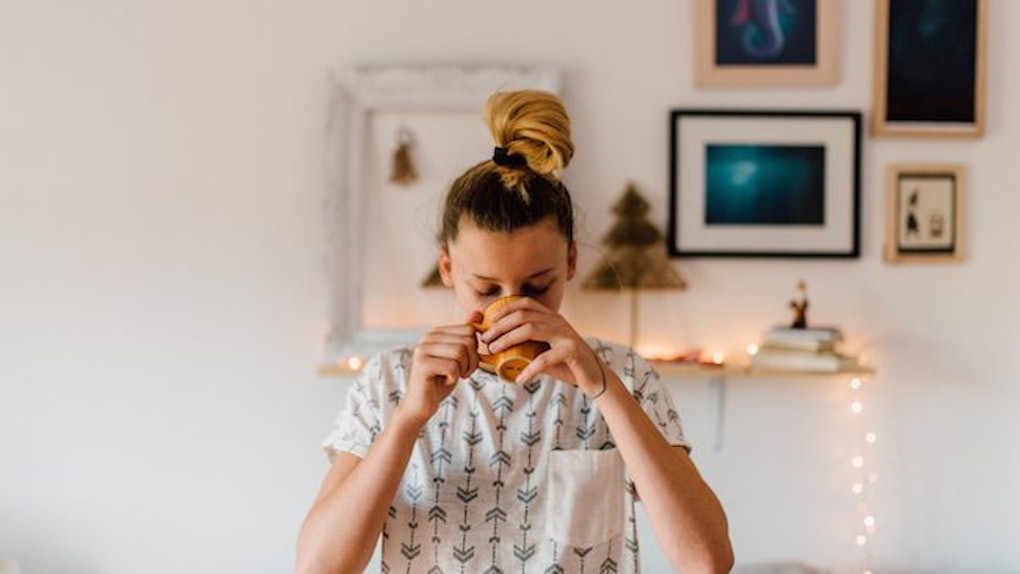 Can I Drink Coffee Before A Workout? Here's What You Really Need To Know

If you're a frequent gym-goer, I'm willing to bet that you've probably seen that chick who strolls into the weight room with her giant Starbucks cup in hand, or the dude with the hefty coffee mug sitting alongside him as he slays on the rowing machine. While we can all agree that coffee is, indeed, a serious blessing that shouldn't just be limited to a morning wake-up call, is it really all that safe to drink coffee before a workout?

Anyone who's looking for a little extra pep in their step before hitting the gym will likely opt for something like a pre-workout energy drink or supplement. But if you've ever tried that stuff, you know damn well just how expensive it is, not to mention the fact that it's not exactly healthy for you and your hard-working bod

Of course, this only makes a quality cup of glorious java that much more tempting to indulge in before a tough sweat sesh.

If you're out here dreaming of a nice cup of joe before the gym, science says you, my friend, are in luck.

A cup of coffee before your ab circuit can reap results such as an increased metabolism, improved circulation, muscle preservation, and extra endurance.

Plus, in a study from Coventry University, sports scientists found that caffeine helps fight decreased muscle strength that often occurs as the body ages.

I'm sure you didn't need me to tell you how amazing coffee is in general, but who knew it could do so much good for the body when it comes to exercising?

But on the real, before you start ordering five cups of your favorite caffeinated beverage at Dunkin' Donuts on your way to the gym, there's a bit of a catch that you should know about.

Despite some of these reported benefits, some personal trainers say drinking coffee before a workout has a few downsides.

For example, while personal trainer Greer Rothermel loves her caffeine as much as the next girl, she knows what to avoid when it comes to her own energizing cup of pre-workout joe.

In terms of the benefits, Rothermel tells Elite Daily,

I have coffee before almost every workout. It has many benefits which could help you during your next workout, including increasing your alertness, improving focus, and enhancing performance.

Though a couple shots of espresso can help you push through a rough workout and make it easier to exercise at a greater intensity, the catch you need to know about is what you put into your coffee: the creamer, the sugar, the artificial flavors -- all that stuff.

Coffee can become unhealthy quickly, so make sure your coffee is good for you. Make sure you skip out on the artificial sweeteners, artificial flavoring, and highly processed creamers.

If you're just not about that black coffee lifestyle, though, personal trainer Rebecca Kennedy has you covered.

Kennedy uses healthy additives in her java to replace the processed crap that hinders the #gains, and your health.

Here's what you can find in Kennedy's cup of brew:

I start every day with a Moka (stove-top espresso) with three pumps of Promix medium chain triglyceride (MCT) oil, and two scoops of collagen peptides. The MCT breaks down fast like a carb and is great to help sustain energy levels without experiencing spikes. Additionally, the collagen peptides I add have a banging 20 grams of protein.

Kennedy stresses the fact that she never adds sugar to her coffee anymore because of its detrimental negative health effects. However, she says the MCT she adds to her coffee give the drink a smooth, butter-like quality that she used to turn to milk and creams for.

So, yes, you can totally mix your coffee with your cardio -- just take it easy on the sugary artificial crap you pour into it to make it taste good. Try reaching for a banana to wash down some black coffee, or sprinkle some cinnamon in your cup when you're craving that sweet little something.