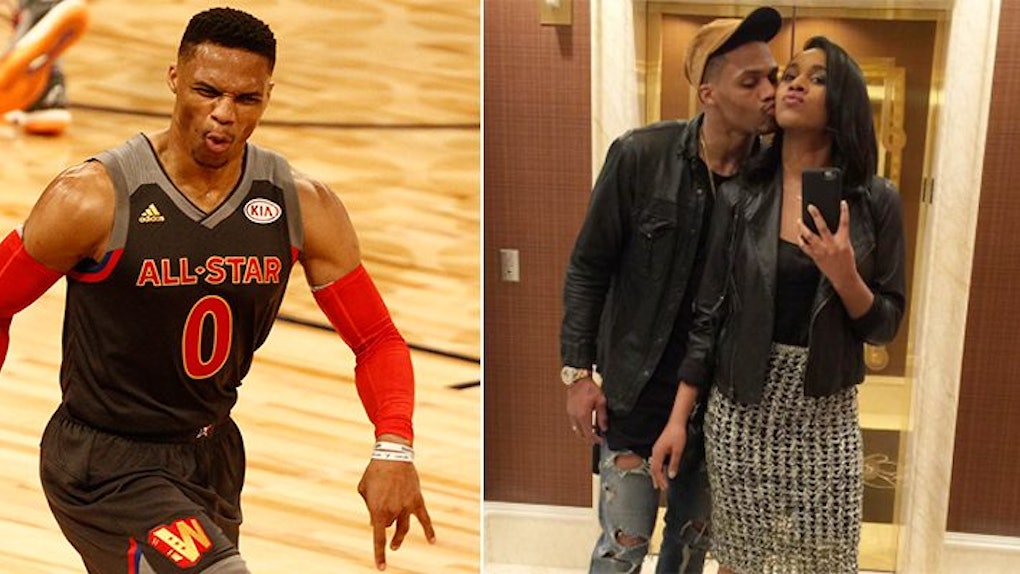 When Russell Westbrook had another amazing game on Thursday night, most people probably weren't thinking what I was thinking.

Most people were probably thinking about how he deserves to be MVP: "Another triple-double? He definitely should get that trophy!"

That's cool and all (and he's definitely my MVP pick), but when I noticed his stat line, I had another thought: Damn, this dude is living life right.

For awhile now I've been a firm, honest-to-goodness believer in the idea that people should aspire to live their lives the way Russell Westbrook has carried himself throughout his career.

It would take way more than a few sentences to explain, but there's time like the day after another big win to lay it all out here:

1. He genuinely doesn't care about other people's opinions.

Speaking of that MVP trophy, it's pretty clear Westbrook doesn't care what anyone thinks about what he does and does not deserve.

It doesn't matter who's talking about him, even if it's the reigning MVP himself, Westbrook will have the same response: "I don't care."

The guy has a total disregard for the type of opinions that might shake someone else's confidence. That's not to imply no one else is worth listening to, just to be clear.

But there's something to be said for Westbrook unapologetically shaking off opinion in a way that reminds us of something that's easy to forget: Most people's opinions ultimately do not matter.

Now that he's 28 years old, and established in his career, there's certain criticisms you don't hear about Westbrook. Early on though, a lot of people had the same gripe with him:

"He shoots too much."

"He's not a real point guard."

"He plays too recklessly."

"He doesn't play the game the way it's supposed to be played."

And how did Westbrook respond? With these words:

I'm not making no adjustments. There's always room for improvement, always room to get better. But the style of play that I play with, that's not changing.

I'm going to go out on a limb and say his decision to remain unconventional worked out.

I'm not going to lie, I don't think Westbrook always looks like a fashion genius ALL the time. And I can't say I haven't laughed at a few Twitter jokes at his expense.

What I can say though, is I'm sure Westbrook wears exactly what makes him feel comfortable on any given day, which is more than can be said for a lot of us.

Plus, it ain't like he can't kill the game when he wants.

I rest my case.

4. He shows off his family.

Westbrook always has his family around him and flaunts how much they mean to him, whether it's celebrating his parents, his wife, or including his little brother in all the cool things he does, like commercials and promotional events.

5. He appreciates the people that stick with him.

It's fair to say the Oklahoma City Thunder is nowhere near the best team Westbrook has played on, but it's his team, nonetheless.

He goes hard for them regardless, and talks about them like they're the best.

Here his is talking about Steven Adams and Enes Kanter, his starting power forward and center. He said,

There's no two other big guys I'd rather play with.

And guess what? When you put on for the people that stick close to you, sometimes they'll do the same for you... maybe even more.

Appreciate the people that stay with you.

6. He goes hard every minute.

He just does NOT stop, and he's always going full speed ahead, playing relentlessly.

It's actually a little insane that a player can play so tirelessly, so often... but that's Westbrook for you.

It's one thing for a person to have confidence when the results come, but Westbrook is consistent. Even when he's losing, he's still bullish about his chances to win.

For example, this moment occurred while his team was losing by 14 points:

When the results aren't coming, Westbrook doesn't turn down, he turns UP.

8. He moves on after people walk out of his life.

How did Russell Westbrook respond to Kevin Durant leaving the Thunder? Eh, all he did was begin to put together one of the most ridiculous seasons ever.

Durant was the only player that had been with Westbrook in the starting lineup since he got to the league... but Westbrook has just kept getting better without missing a step.

Plus, it clearly hasn't shaken his confidence.

The triple-doubles, the yells on the court, the hard high-fives, the dances; they may look ridiculous to someone else, but Russell Westbrook has his fun, regardless.

Plus, did I mention he doesn't care about anyone else's opinion?

The commercial says it all. At the end of the day, Westbrook does what we all want to do: whatever he wants.