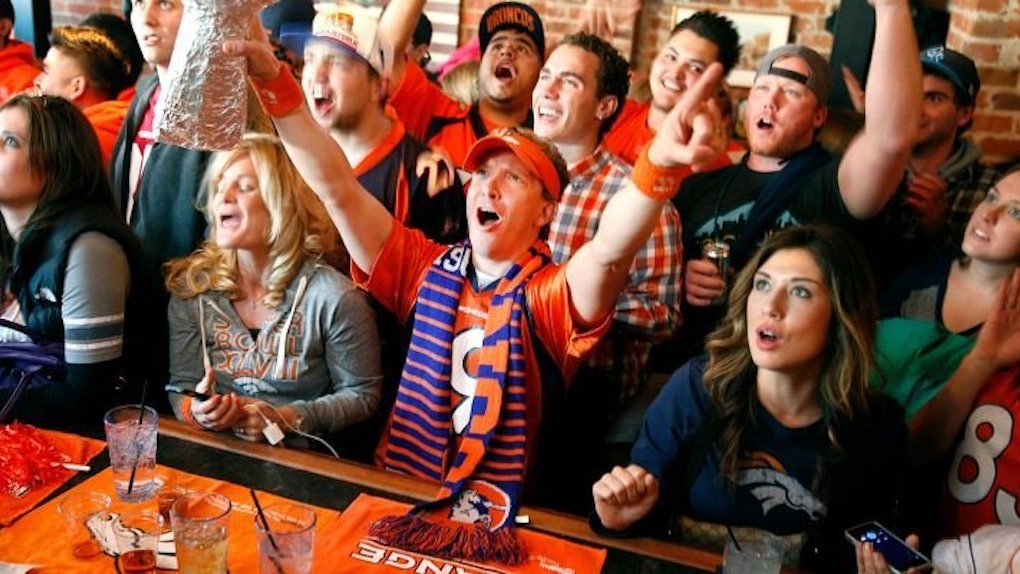 I may have sweat through my shirt this morning on the way to work, but that doesn't mean the NFL season isn't already underway.

It's mid-September, and following the conclusion of the San Francisco 49ers' 28-0 beatdown of the Los Angeles Rams on Monday Night Football, Week 1 of this NFL season is officially in the books.

Now, I don't know how you like to spend your Sundays during the NFL season, but for most games, I like to hunker down in my apartment with friends, drink a little, order Seamless and pray to every deity known to man the New York Giants find a way to pull out a win.

This past Sunday, though, I gave into the allure that is going to a bar, eating too many wings, drinking too much beer and watching football all day.

Let me be clear, I do not condone this sort of behavior on a weekly basis, but for Week 1, I thought it was more than appropriate.

Immediately after walking into a crowded bar on the Upper West Side, I realized why I gave up the going-out-for-NFL-games tradition years ago.

Despite the fact my friends and I had a reservation, we still had to wait for a table. The bar was crowded, loud, lacking in good TV coverage and filled with all manner of football fans.

There were fans of seemingly every team in the league, as well as some folks who looked like they'd never watched a football game in their lives.

I'm going to go out on a limb here and say I wasn't the only one who encountered such fuckery during Week 1 of the NFL season.

While you're still getting over that hangover, check out the 12 types of fans you definitely met at the bar during the first week of the NFL season.

1. The dude who wore a jersey over a polo shirt.

I wish I didn't see this, but then I saw it again while watching the Steelers play the Redskins on Monday Night Football. Don't do this, ever.

2. The woman who sat in a booth by herself watching the US Open final.

Look, I love tennis as much as the next person, but this lady was cheering for Stan Wawrinka harder than any NFL fan in the entire bar. I think that event might've been better suited for viewing in the home.

3. The guy who had "Deez Nuts" taped over a name on the back of his jersey.

Hey, why buy a new jersey just because the player whose jersey you bought signed with another team? I'm really, really tired of seeing electrical tape on the back of sports jerseys. We don't even have to discuss the replacement name this dude went with.

4. The man who felt the need to high five everyone after every play, regardless of what happened.

I was down with this dude in the first quarter, but by halftime, I was ready to try and move my seat. No more touching, bro. Let's just celebrate in our own personal space, OK?

5. The lady who couldn't figure out why the bar was so crowded on a Sunday.

I bullshit you not. And to make matter worse, she kept asking out loud, like she actually wanted an answer.

6. The dude in a Bills jersey who was hammered before the 1 pm kickoffs and well after the 4 pm games ended.

7. The guy who clapped vigorously after every first down like he was cheering for his kid at the Olympics.

It's a wonder this dude didn't run out of energy by the end of the third quarter. I guess buffalo wing sauce and Bud Lights will fuel you up just enough for a three-hour football game.

8. The woman who ordered numerous glasses of white wine.

Look, I'm not one of these drink-shamers. I think you should enjoy whatever alcoholic beverage floats your boat and makes you feel loved. But when it comes to football on Sunday, for the love of God, don't order white wine at the bar. Please.

9. The man who said he didn't want any wings but then eyed everyone else eating wings like a crack fiend.

We all have that one friend. Friends don't let friends pretend to diet on NFL Sundays and then throw off the entire table's wing order.

10. The dude wearing a Giants hat that looked like it spent the last 50 years in a time capsule.

Go to Dick's or Modell's, or any other place of your choosing, and get yourself a hat from this decade, sir. Your "retro" hat isn't cool, it makes you look like you treat showering as more of a weekly option than a daily necessity.

11. The lady screaming at the top of her lungs every time the Cowboys completed a pass.

We get it, you're rooting for the Cowboys. Hell, I think the Cowboys heard this woman all the way in Dallas. Didn't help 'em win, though. Out of respect for your fellow patrons, please try and cheer when, like, everyone else thinks it's appropriate to do so.

12. The guy who looked like he was cheering for both teams, so you weren't sure which he was actually a fan of.

I don't know, man. If I can't tell which team you're rooting for at first glance, I don't trust you. You could be an inside man for ISIS for all I know.

Here's to an action-packed Week 2!