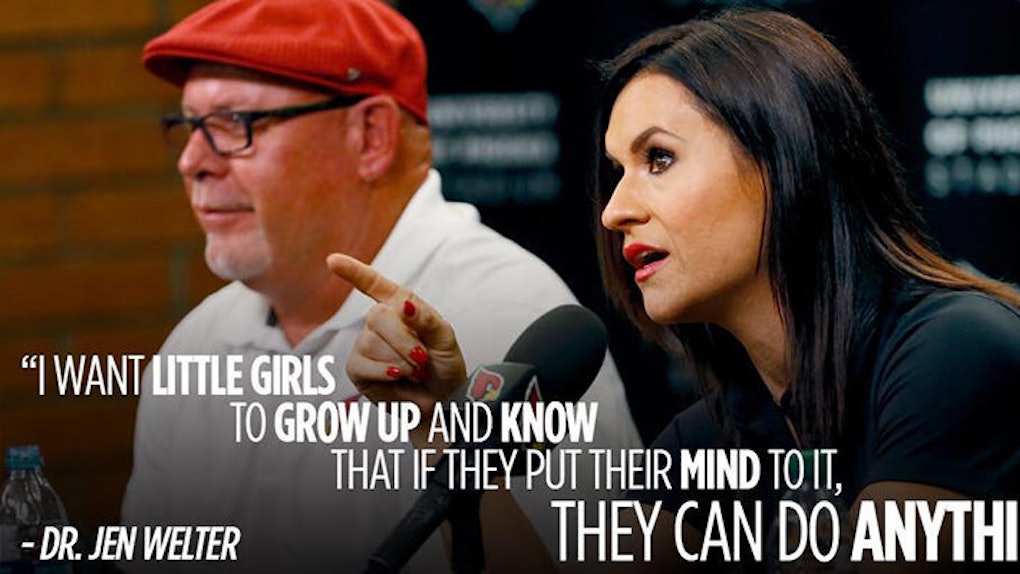 The NFL is making strategic decisions that benefit its business by hiring women to assist with coaching.

On July 27, 2015, the Arizona Cardinals announced they hired Jen Welter, the first female coach in the NFL. The news came one year after the San Antonio Spurs hired Becky Hammon as their first full-time female assistant coach.

While Welter's credentials are as impressive as many other coaches in the league, her future success may be due to other characteristics that aren't displayed in her résumé.

Fortunately, it seems to be that the NFL is catching onto these traits, and it's doing something about it.

All coaching requires exceptional teaching abilities. Growing up, the people who make the biggest impressions on us are those who live in our homes and who we see at school.

Teachers are one of the primary reasons we learn to do math a certain way and love specific books.

Great teachers have a combination of skills that include analytical, interpersonal and verbal communication. These are all traits needed to coach, too.

The proof is in the pudding. After Becky Hammon was hired with the Spurs, she became the head coach for their summer league and went on to bring home a title for the team in July of 2015.

That made her the first female NBA head coach to win a summer league title…ever.

Women are instinctive problem-solvers. As mothers, women tend to both the physical and emotional needs of their children.

They find solutions to problems that seem too complicated, and often, they make their solutions look effortless.

From scraping your knee to coping with a breakup, mom typically gives instructions or advice that seem to be the million-dollar answer.

As an NFL coach, these same characteristics are needed on the field. Teams can’t use the same plays and are constantly in need of finding new ways to do things.

Each player has a unique skill, and it’s up to the coach to bring all of the various skills together to make one cohesive, winning unit. It is very similar to what women do in their homes and with their families.

Ask us to talk about any subject and we’ll do it.

Women are also good at assigning action to the emotion after it has been discussed.

If women don’t like something, after we’re done verbally expressing how we feel, we will suggest what steps need to be taken to change the outcome we disliked in the first place.

As with most NFL teams, the Arizona Cardinals will experience sudden changes during the season that will require them to quickly pivot.

When a player gets injured and the dynamic of the team suddenly changes, it’s the coach's responsibility to make quick decisions like these as well.

Women make up half of the population.

More importantly, women make the bulk of all purchasing decisions, and 55 percent of women watch football. Advertisement and marketing initiatives cater to women for this simple reason.

If women like what they see and it resonates, they’ll contribute to the economy by purchasing that product or service. And chances are women will tell all of their friends about it, too.

With Jen Welter being part of the Arizona Cardinal’s coaching team, there’s a high likelihood their fan base will now increase due to this hiring decision.

In turn, these fans will buy more merchandise, resulting in more revenue for the NFL team.

Not to mention, the NFL’s advertisers will be happier if more women are watching the game in support of this female coach.

Everyone wins, and yes, the NFL is in the business of making money.