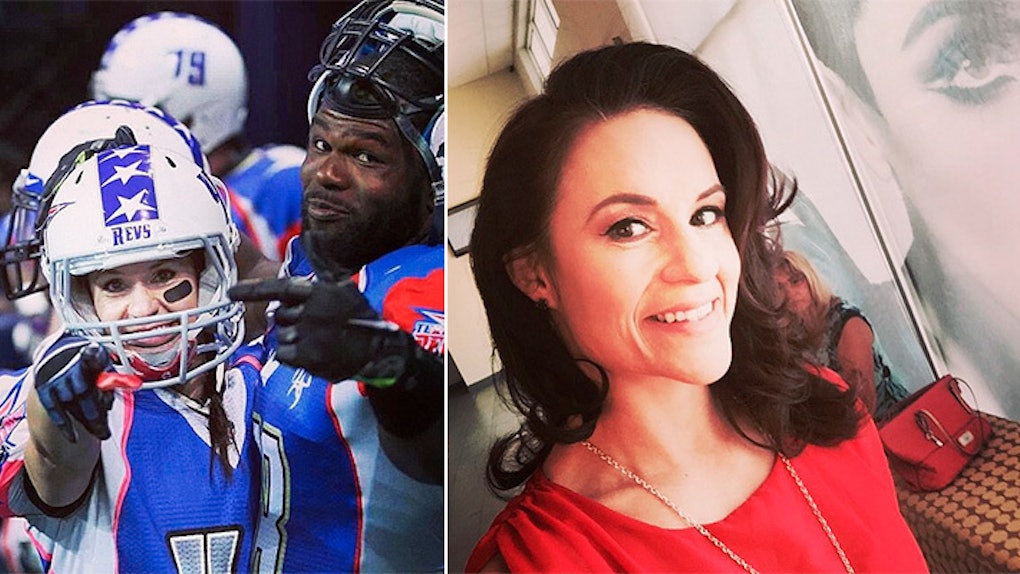 Last night, the Arizona Cardinals made NFL history by announcing the hiring of Jen Welter as an assistant coaching intern for training camp and the preseason.

The 37-year-old is the first female to hold a coaching position of any kind in the National Football League.

Welter is a former collegiate rugby player who went on to play 14 seasons of professional football.

She played for years in the Women's Football Alliance, but in 2014, Welter became the first female to play men's professional football, with the Texas Revolution.

Earlier this year, Welter was hired as a linebacker and special teams coach for the Revolution, becoming the first woman to coach in a men's professional football league.

Her progression through the ranks of men's professional football has been swift, and now it's time to really meet the woman who will be standing on the Cardinals' sideline this summer.

And she took a huge step toward reaching that goal with the Boston College rugby team.

In addition to the Diamonds, the 37-year-old also had a stint with the WFL's Houston Energy.

In February 2014, Welter became the first female to play a non-kicking position in a men's professional football league.

She played running back and special teams for the Texas Revolution of the Indoor Football League...

And she wasn't afraid to get popped by dudes who were twice her size.

That won her the admiration and respect of her teammates...

Along with an invite to the postgame parties.

She also got a chance to hang with Snoop at the #SnooperBowl...

Welter made history again by becoming the first female coach in a men's professional football league.

Of course, it was with her old team, the Texas Revs.

Now, Welter is about to embark on her greatest journey yet, as a coach with the NFL's Arizona Cardinals.

She'll continue to be a role model for women everywhere.