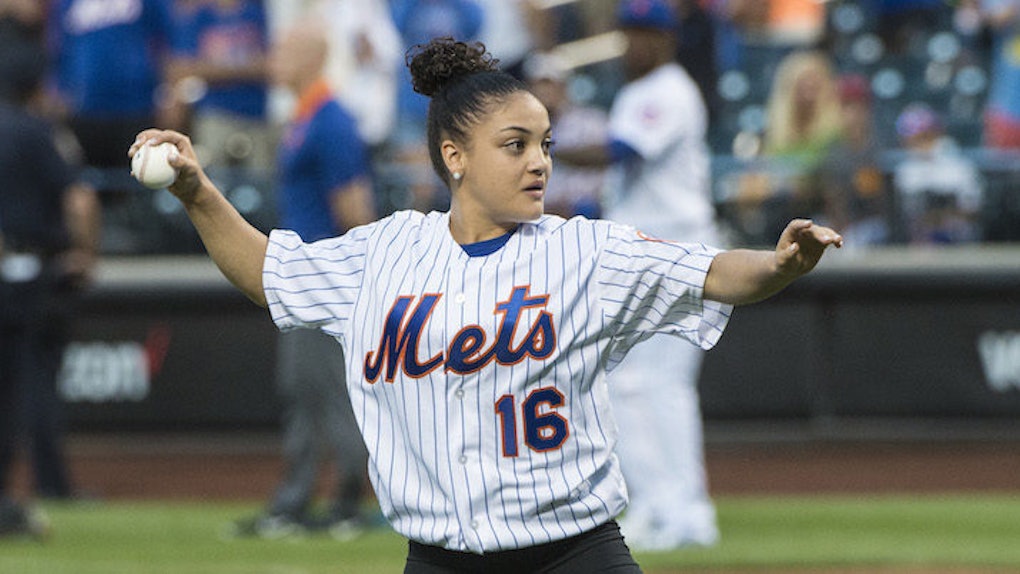 Laurie Hernandez stopped by Citi Field in Queens to throw out the first pitch for the Mets on Friday.

You know, regular Labor Day weekend plans for a 16-year-old gymnast who just won a bunch of medals at the Rio Olympics.

Obviously, her pitch was insane. She took off her gold medal, gave it to her sister and then did a flip from the mound before throwing the baseball to the catcher.

Her pitch may have gone a little wide, but the cartwheel -- done while holding the baseball! -- was so impressive, I don't even care where the ball ended up. Although Hernandez acknowledged embarrassment on Instagram, saying,

Hernandez told NJ.com she had been preparing for the first pitch in her backyard with her dad. She wanted to avoid "pulling a 50 Cent."

I had it planned that I was going to take my medal off, do a flip, toss it and then the ball kind of went crooked and hit the ground. But that's why I do gymnastics and not baseball.

Hernandez also got to hang out with hair god Noah Syndergaard.

But throwing out the first pitch for the Mets may not have been the highlight of Hernandez's weekend.

Hernandez is a Jersey girl, and like the rest of us, she has to decide where her loyalty lies in the Mets vs. Yankees vs. Phillies divide.

Hernandez made the right choice and has been a lifelong Yankees fan, according to NJ.com. After the Mets game on Friday, Hernandez and her family headed to the Bronx for a Yankees game on Monday, where she was honored along with other Olympians.

Hernandez enjoyed the game with her siblings.

Hernandez, like many others, grew up watching baseball and said being honored at Yankee Stadium was "an amazing experience."