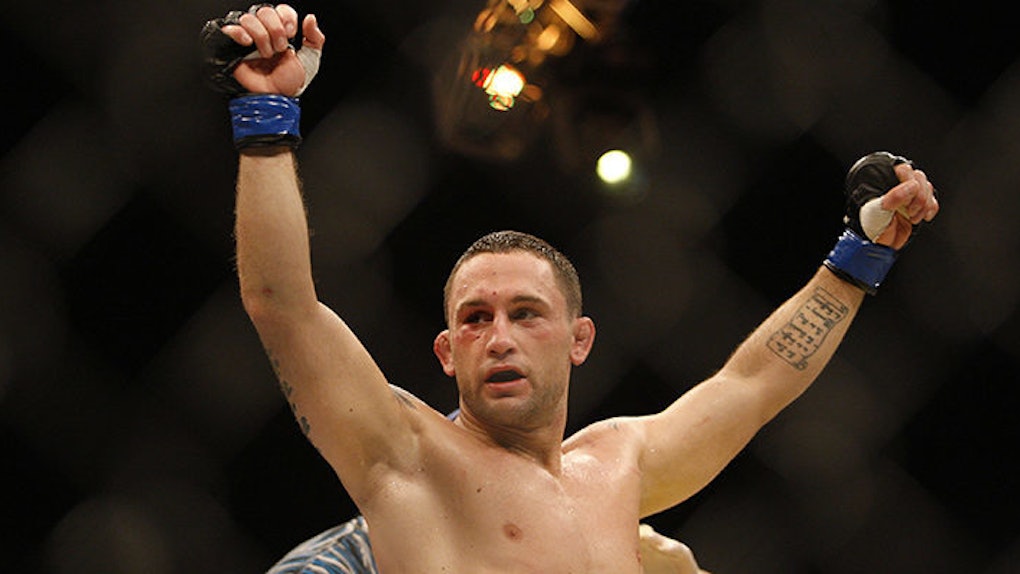 How To Get Fit Like An MMA Fighter, According To UFC Star Frankie Edgar

When MMA fans are asked about the most pure athletes in the sport, one of the first names that comes to mind is Frankie "The Answer" Edgar.

The UFC featherweight title contender never stops moving inside the cage and continuously outworks the most physically imposing competitors.

He recently opened his own UFC gym in New Jersey, which should come as no surprise since there's no better athlete to emulate if you want the total package: strength, speed and conditioning.

Edgar spoke to Elite Daily about how he attained such unbelievable fitness and gave some crucial advice on what it takes to be a UFC champion.

“You gotta be ready to suffer,” Edgar said, before explaining how great conditioning comes from putting maximum effort into any kind of workout.

The 5'6", 145-pound former lightweight champion possesses an endless gas tank that allows him to constantly circle around his opponents and press forward with attacks.

Edgar said his conditioning is largely due to the following exercises.

With kicks, you're moving the biggest part of your body, your legs, and it takes a lot of energy to do that.

Another reason boxing is so beneficial for cardiovascular health? Edgar noted,

A longtime wrestler, Edgar has repeatedly proved he can lift his own body weight when most people would be too tired to tie their shoes.

But it's not bulging biceps or shoulder muscles that make his takedowns so effective. The most important part of the body when it comes to hoisting people off the ground is the hips, Edgar said.

He strengthens his hips by lying on his back, resting the barbell on his hips and doing hip thrusts.

To boost your overall power and lifting ability, here's what Edgar recommended.

Edgar favors these workouts because they can improve strength, endurance and speed all at the same time.

UFC commentators often mention how Edgar is so “light on his feet,” bouncing around the octagon and throwing kicks as if he was weightless.

Speed, he said, comes with “constantly putting footwork into all [his] workouts.”

To work on cutting angles and dodging punches, Edgar uses the below exercises.

According to Edgar, great footwork is essential in boxing, and no heavy bag or pads workout is complete without it.

Exercise is like a religion to Frankie Edgar, but he could not name strength, speed or conditioning as the most important element of training for the average person.

The real answer is diet. He said,

You can still be a fit person without working out if you put the right stuff in your body.

He said he prefers to “keep it simple” in terms of what he eats while training for a fight. He told Elite Daily,

I try to do a good vegetable, lean protein, some grains and a good fat.

Edgar gave these three tips for crafting the perfect diet.

It helps you lose weight and get lean.

2. Eat more frequently. Leaving big gaps in between meals leaves you starving and more prone to overeating. Edgar eats healthy-sized meals for breakfast, lunch and dinner by incorporating nutritious snacks like nuts and yogurt throughout the day.

3. Learn to obey your body. Edgar said you know you ate bad when you immediately feel it at the start of a workout. He recommended trying to remember what certain foods will do to you the following day.

Edgar concluded his conversation with Elite Daily by offering what he believes to be the best advice for anybody looking to get fit. He said,

Dive in... Everyone's always like, 'Oh, I'll start next Monday,' or, 'I'll start after vacation'… You have to dive in. I know people who didn't do fitness [and now] they love it. It becomes a lifestyle.

A win will hopefully grant him a shot at featherweight champion Conor McGregor, who Edgar suspects will have to do quite a bit of homework leading into their long-awaited fight.