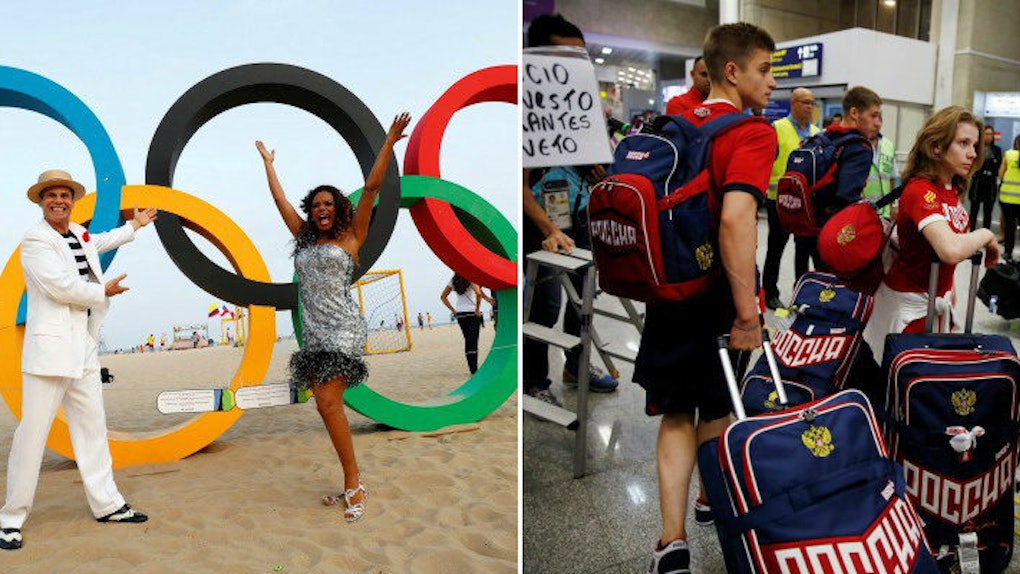 The opening ceremony at the Rio 2016 Olympics has yet to commence, but there are already Olympic athletes refusing to move into their designated living quarters, reporters tweeting about some pretty rank sewer conditions and calls for an entire nation to be banned from Rio altogether.

You may have recently heard and read about Russia's state-run doping program, but do you really know what constitutes "doping" at an event like the Olympics?

According to the BBC, the World Anti-Doping Agency is "disappointed" in the International Olympic Committee for not following its recommendation to ban Russia entirely from competing in the Rio Olympics.

Instead, the IOC concluded each sport's federation will have the final say in banning individual athletes from Russia and any other competing country. In addition, the IOC ruled any Russian athlete who previously served a doping ban will not be allowed to compete in Rio de Janeiro, Brazil in August.

Many athletes, officials and politicians are pissed about the IOC's decision on Russia, but to have an opinion on whether or not the fact Russia will compete at these Olympics is a travesty, you need to know what constitutes doping in the first place.

According to the BBC, quite simply, doping is the act of an athlete taking a banned or illegal substance in order to improve performance. Apparently, there are five classes of banned substances, but the most commonly used banned substances are anabolic steroids, which work to increase testosterone.

WADA is the independent international organization tasked with monitoring doping in sports, but as you can see with a case like Russia, its findings and recommendations aren't always enforced by governing bodies like the IOC.

Here's where the real problem exists.

A state-run doping program is obviously catastrophic for an even playing field in sports, but the International Olympic Committee's refusal to really crack down on such a program undermines not only WADA, but the entire Olympics.

This also sets a dangerous precedent that encourages leniency when it comes to eradicating doping from international sports competitions.

[Investigators] exposed, beyond a reasonable doubt, a state-run doping program in Russia that seriously undermines the principles of clean sport embodied within the World Anti-Doping Code.

Many, including clean athletes and whistleblowers, have demonstrated courage and strength in confronting a culture of state-supported doping and corruption within Russia. Disappointingly, however, in response to the most important moment for clean athletes and the integrity of the Olympic Games, the IOC has refused to take decisive leadership.

Yuliya Stepanova is the Russian runner who helped bring to light her nation's doping program. She was hoping to participate at the Rio Olympics as an "independent athlete," but we know now she was refused that request.

WADA has been very vocal in supporting Yuliya's desire to compete as an independent athlete. Ms. Stepanova was instrumental in courageously exposing the single biggest doping scandal of all time. WADA is very concerned by the message that this sends whistleblowers for the future.

Past Olympians and those competing in Rio haven't turned a blind eye to the IOC's findings, and they've been letting their frustrations out on Twitter.

It seems everyone is slamming this doping scandal, from Russia's actions to the IOC's final decision, as a confusing mess.

Unfortunately, I don't think this is the last time people will use those words to describe the Rio Olympics.

Citations: Rio Olympics 2016: Wada criticises IOC for failing to ban Russian team (BBC), Doping in sport: What is it and how is it being tackled? (BBC), The dope on doping in sports (The Hindu), DECISION OF THE IOC EXECUTIVE BOARD CONCERNING THE PARTICIPATION OF RUSSIAN ATHLETES IN THE OLYMPIC GAMES RIO 2016 (Olympic.org)