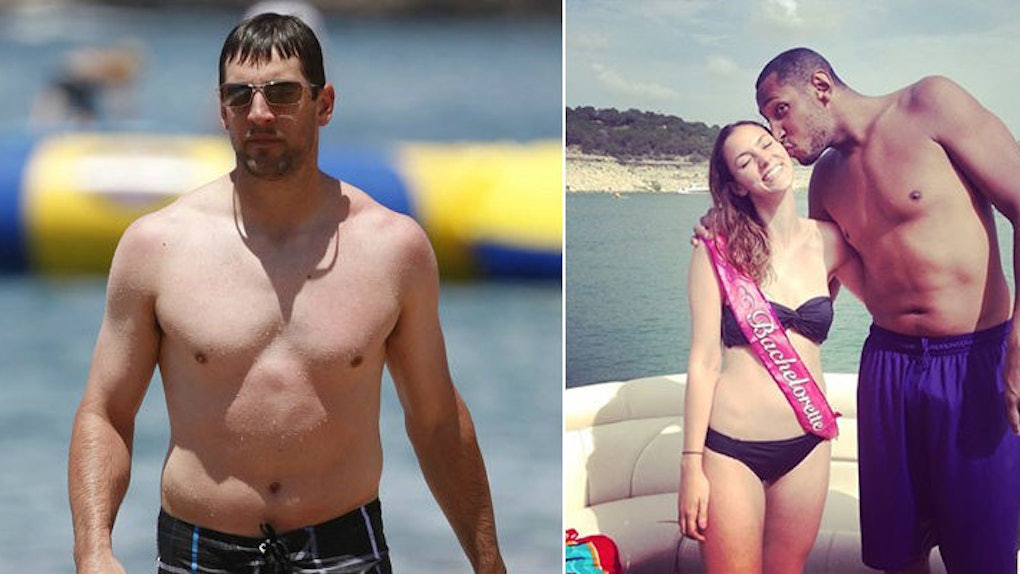 20 Athletes Who Are Absolutely Crushing It Despite Having Dadbods

It's hard to be 100 percent sure how Dadbods took over the Internet, but regardless, the trend has swept across the Web like wildfire.

Question: Who can post pictures of a #Dadbod? Answer: Everyone.

From college bros to Leo DiCaprio, men from all walks of life are riding the Dadbod wave.

And, you know what? It's freaking awesome. Apparently, it's no longer sexy to have an eight-pack and chiseled arms.

No, what's driving women wild now are dudes who clearly have some muscle, but also enjoy a casual beer or 10.

In addition to Leo and every other dude in your life, you know who else has a Dadbod? Some of your favorite sports stars.

Here are 20 athletes who are crushing it, despite having Dadbods.

Nothing says Dadbod like good times on a boat and American flag shorts. That's funny, those look like beers in the bottom left corner of the picture.

Is anyone really surprised to see Jay Cutler on this list? Dude is the living embodiment of Dadbod.

When you're at the family barbecue and your uncle hops off the grill to show you his spiral. #dadbodpic.twitter.com/QHJGaPIgC6 — Dad Bods (@YearOfTheDadBod) April 14, 2015

Looks like Jameis could use a little less dipping butter with those crab legs.

I have the sneaking suspicion teammate Marc Gasol has a Dadbod, too. Smart move leaving the jersey on, Marc.

If a dude's nickname is the “Kung Fu Panda,” you know he's rocking that Dadbod.

When QPR end up getting relegated from the Premier League this season, it won't be because of Adel Taarabt and his Dadbod. Homie was on loan at AC Milan this season.

When Boris Diaw isn't winning NBA championships, he and his Dadbod do appearances at bachelorette parties.

Apparently, ESPN The Magazine knew Dadbod was hot before anyone else.

When you win an NBA title, you get to stunt on everyone with your Dadbod.

After you win two Super Bowls and help bring three daughters into this world, you get… an A+ Dadbod.

No wonder Bynum is out of work right now, no team wants to sign a dude who can't make it up the court.

CP3 is about as talented as it gets at the point guard position. He's also got a Dadbod that was born to assist… with the creation of this post.

Shit, that's not a Dadbod. That's a dude who's in his third trimester.

Olivia Munn is really into long walks on the beach, Super Bowl rings and Dadbods.

Harvey isn't Gotham's Dark Knight because he's one of just three pitchers with five wins already this year; he's Batman because he rocks a Dadbod.

We're starting to see a trend among starting NFL quarterbacks… the Dadbod.

How do you say Dadbod in Portuguese?

Rule No. 232: A great Dadbod exponentially improves with the addition of neon sunglasses.

Chill, Melo, we're not messing with your Dadbod. Or anyone else's for that matter.