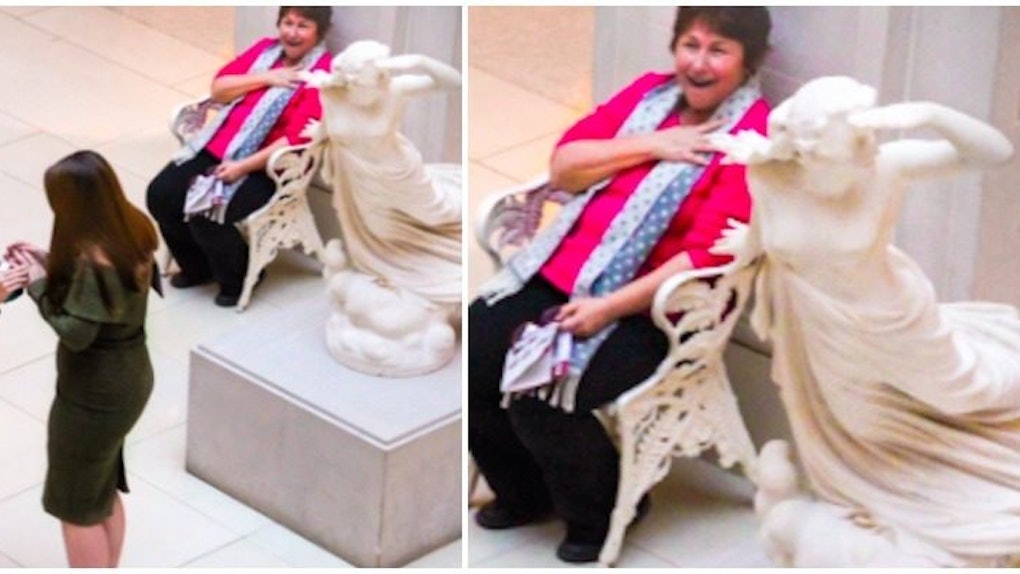 Proposal video and photographs are to the internet what lasagna is to Garfield: an irresistible treat that will, if consumed too often, lead to clogged arteries and cardiac arrest.

The amount of elaborate proposal videos I've seen at this job makes me want to one day propose via Venmo comment.

But, occasionally, you still come across one of these that warms your heart.

This is one of those times primarily because the couple is, for once, not heterosexual, and also because the moment was modest and so personal. it doesn't have that familiar odor of self-satisfaction and showmanship from the proposer that the usual viral proposals are drenched in.

OK, I understand that I'm probably just prejudiced to this kind of thing at this point, and I apologize to all the thoughtful people who made lovely proposal videos for their annoying wives and friends, and I hate you.

Now that that apology is out of the way, let's get to the picture in question.

This picture was snapped at the Art Institute of Chicago of Jessica Rodriguez, 25, and Chelsea Miller, 26, who live in Chicago.

Rodriguez, who did the proposing, told BuzzFeed that after her grandmother passed away earlier in the year,

I just knew I had to hold on to love as much as I could since our days are counted. So I went and bought the ring.

Jessica's brother captured the moment and shared the photograph on Twitter, where it quickly went super viral because it is heartwarming and beautiful and features an LGBTQ+ couple exercising their hard-earned rights.

People are losing it over this photograph. It's received more than 300k likes in a day and a half.

The picture ALSO went viral because of the emoji-like reaction of the woman sitting beside them, who was just taking a much-needed rest from looking at sculptures of white women with flowing robes falling off their boobs, and got front row seats to romance and joy.

Her reaction mimics our own. And people haven't failed to notice.

Rodriguez, busy with, you know, getting engaged, didn't even notice the woman, but was pleased when she was pointed out:

Whoever she is, we are so thankful of her pure reaction. She made our moment even more special!

Of course, I think we should focus on the main players in this drama, rather than the person watching.

Here is a video of the proposal as well, which thawed my frigid, raisin-sized heart.

Still, it's slightly disheartening that a modest LGBTQ+ proposal video/picture can go as viral as this did because it implies how rare representations of such marriages are in popular culture.

But, for now, for a moment, we can just celebrate these two women and their joy.