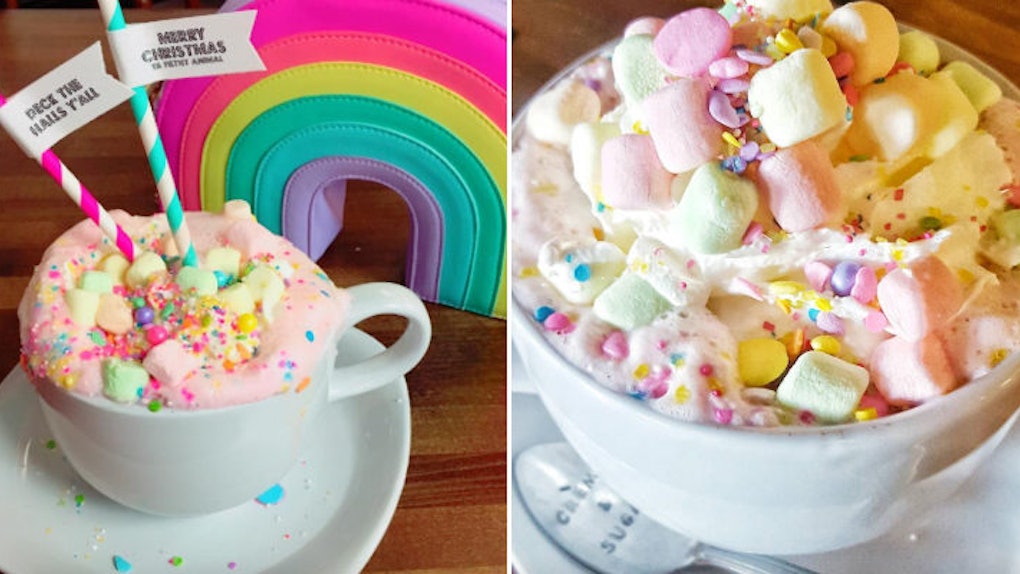 Other than that bizarre, pooping Squatty Potty mascot, I'd definitely have a unicorn as a full-time pet.

And if I could transform that unicorn into drink-form (without injuring it by putting it into a blender), then the result would be this delicious concoction.

Behold unicorn hot chocolate in all its foamy, frothy glory:

To all the haters in fifth grade who told me unicorns weren't real and that I was lame to believe they existed, I say this:

SEE?! UNICORNS ARE REAL. I CAN PUT THEM IN MY MOUTH.

OK, if I had claimed as a fifth grader that I regularly put unicorns "in my mouth," someone would probably have called Child Protective Services to launch an investigation.

But this makes much more sense. And if you live in Southern California, you can grab this delicious elixir at the dessert parlor Crème and Sugar over in Anaheim.

The drink is made with white hot chocolate that's been dyed pink, marshmallows and -- you guessed it -- sprinkles. In fact, it utilizes many different types of sprinkles, including edible pearls and edible glitter.

This unicorn hot chocolate was created by Crème and Sugar's owner Joanna Czikalla who says that the drink tastes mostly of white chocolate with a trace of vanilla, according to Cosmopolitan.

"Uh, hello, Willy Wonka? Do I have an heir to your candy throne for you!"

Well, I hope my supply of unicorn hot chocolate will last as long as the suspense, Mr. Wonka.

I can safely say that this wintertime drink is extremely essential for getting us through these last few weeks of the Earth's nightmare cruise around the sun known as 2016.

And if you don't live on the West Coast (*cough, best coast, cough*), then you'll just have to rethink why you're not out here where it is eternally summer and where we have unicorn hot chocolate to get us through those cold, 55-degree nights.

Citations: You're Going to Lose It Over Fluffy Pink Unicorn Hot Chocolate (Cosmopolitan)