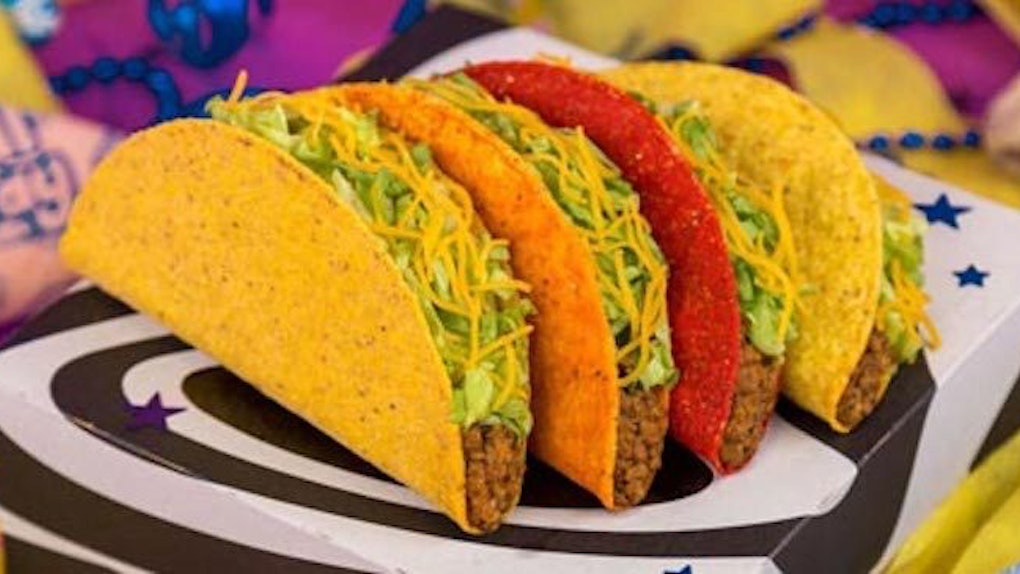 If you haven't already marked Oct. 4 on your calendar as National Taco Day, then I'll give you a minute to go ahead and circle that day now. Of course, if you're a lover of Taco Bell (who isn't?), every day can be National Taco Day if you want it to be, but the fast-food chain is making the holiday extra special this year. You'll want to make sure you clear any dinner plans on Oct. 4 because the only thing you'll want is Taco Bell's National Taco Day gift box.

According to a press release on Taco Bell's website, the restaurant will offer customers a special Taco Day gift box that will come complete with four tacos for $5. You won't be getting just four plain old tacos, though. Taco Bell curated the box with four of its classic tacos: Nacho Cheese, Cool Ranch, and Fiery Doritos Locos Tacos, and the iconic Crunchy Taco. Yep, you can snag all that taco goodness on Oct. 4 for just $5.

The festivities don't stop there, though. Since this is a gift box, your tacos will come wrapped in limited edition paper, and all four tacos will be nestled inside a specialty box. It sounds like Taco Bell is really making sure that National Taco Day is recognized as a true celebration by ensuring that your meal is not just another "Taco Tuesday" -- National Taco Day is on a Wednesday, so you actually have an excuse to double up your taco consumption for the week (like you really need an excuse).

If a box of tacos won't satisfy your National Taco Day requirements, then you could be one of the lucky ones dining on a five-course meal at Taco Bell's test kitchen in Irvine, CA, according to Taco Bell's press release. That's right, you could have the opportunity to eat in the test kitchen that has graced us with such innovations as the Quesalupa and the Doritos Locos Tacos. Seriously, I think I probably had the same feeling when I first discovered that the Doritos Locos Tacos existed that Ben Franklin had when he discovered electricity -- they're really that life-changing.

According to the press release, the experience will celebrate the iconic taco -- very fitting for National Taco Day. Sadly, the reservations filled up fast. But, all is not lost, because according to Delish, you can put your name down on a waitlist to be a part of the next Taco Bell test kitchen experience.

If you're thinking that every holiday needs a movie celebrating it, then you'll be glad to know that Taco Bell is on the same page. According to the company's press release, an animated short called "Glen and the Magic Taco" was released on Sept. 25 to help tell the story of how National Taco Day originated.

You can sit back with a taco gift box and play "Glen and the Magic Taco" as you celebrate all that Taco Bell and National Taco Day have to offer.

If even that isn't enough for you, then you can start getting ready for the release of Taco Bell's new clothing line collaboration with Forever 21 called Forever 21 x Taco Bell. The line isn't available in stores until Oct. 11, but you can get a peek at what some of the pieces will look like -- there's a "Fire" sauce bodysuit that looks like it should become a wardrobe staple in every closet. So, don't lament the fact that you won't be able to don these Taco Bell-inspired duds for this year's holiday; think about how much more festive you'll be when National Taco Day 2018 comes around.

Until then, celebrate this year's National Taco Day with a Taco Bell gift box and all the "Fire" sauce you can handle.