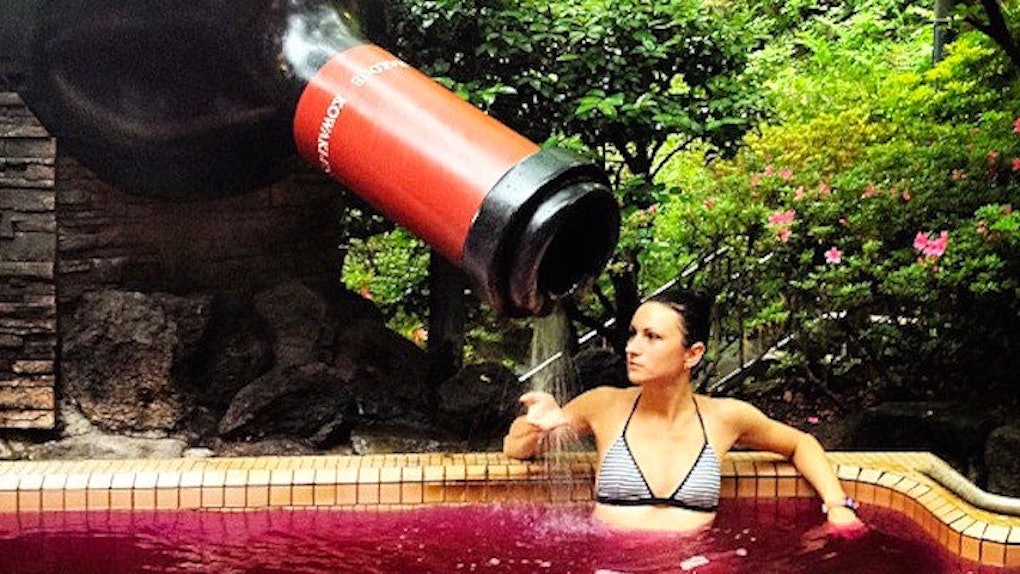 Japanese Wine Spa Is The Perfect Place To Drown Your Sorrows

Today has been an emotionally taxing day for an overwhelming number of Americans who are less than pleased with the outcome of the presidential election.

If you're feeling down about Donald Trump's victory, there are several different things you can do to cheer yourself up.

You can text your mom and whine about the elections, leave the country or just get so drunk that you can't even remember your own name — let alone the name of the man who just won the election.

If you're having a hard time picking between those three amazing options (seriously, I don't blame you), there's no need to worry.

You can head over to Yunessun Spa Resort in Japan and complain about Trump as you immerse yourself in a pool of wine.

Yes, you read that correctly: a pool of wine!

Located about 60 miles west of Tokyo, this glorious wine spa, which refers to itself as a "spa theme park," is almost like a Disneyland but for people who love getting wine-wasted on the reg.

More specifically, Yunessun Spa Resort is a magical land where booze flows freely and people swim in hot tubs filled with Merlot or Bordeaux instead of boring old water.

If the thought of drowning your sorrows in wine isn't enough to raise your post-election spirits, you'll be glad to know that swimming in these boozy pools also has some unexpected health benefits.

The wine in these almighty springs contains the antioxidant resveratrol, which is believed to have anti-aging properties.

They anti-aging ingredient has been known to strengthen the skin, reduce inflammation, improve circulation and even prevent the skin from losing elasticity and collagen fibers.

However, women have been reaping the beauty benefits of wine long before this turnt-up spa came into existence.

Apparently, Egyptians were big fans of using wine baths to soften their skin, and rumor has it Cleopatra often bathed in vino while getting grape seed oil massaged into her skin.

Oh, and if the thought of guzzling down wine that a bunch of people have been soaking in all day sounds slightly repulsive, don't worry.

You can just drink it straight from the source by swimming over to the 12-foot bottle of wine conveniently located alongside the pool.

Plus, they also have hot tubs full of ramen for when those drunchies start to kick in.

Or if you're in the mood for something a little sweeter, you can dive face-first into a chocolate bath.

Seriously, what more could you possibly ask for?

Citations: Attention: There's a spa in Japan where you can actually swim in wine Read more: http://metro.co.uk/2016/11/07/attention-theres-a-spa-in-japan-where-you-can-actually-swim-in-wine-6240364/#ixzz4PXeotPwb (Metro.Co.Uk)