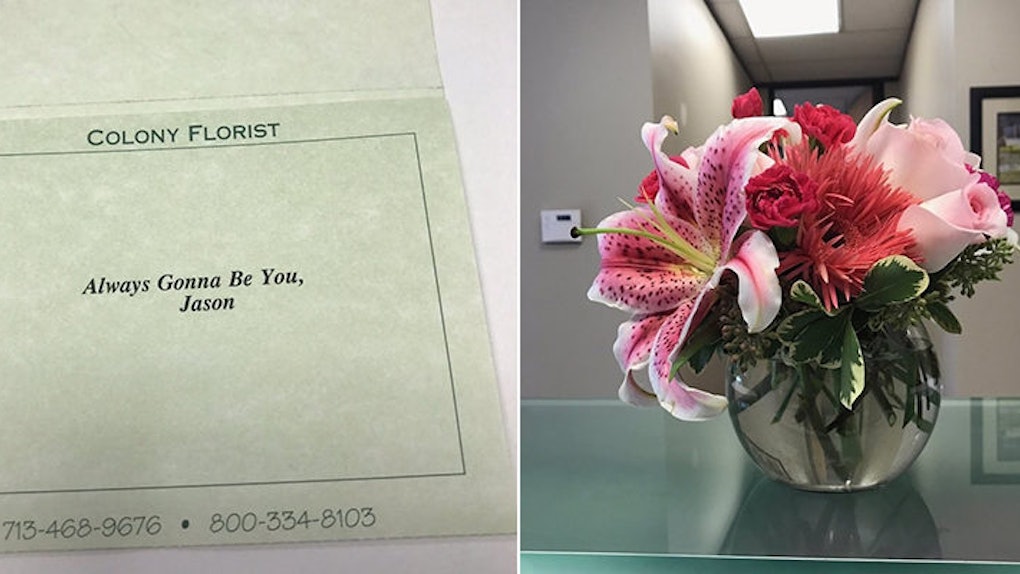 If your parents aren't divorced, you're a fucking nerd.

YEAH I SAID IT.

Look at me: My parents got divorced when I was 19, and now I'M SO COOL. Really! Everyone says so.

I think I've made my point.

Anyway, one Twitter user was recently made extremely cool, like me, when her parents divorced. She posted this heart-splitting diptych because she doesn't think election day will hurt us enough.

Steady your souls, this will rattle you.

Morgan Lynn is a 17-year-old from Texas. Her parents were married for 19 years before finally calling it quits.

Lynn told BuzzFeed that her father used to send her mom flowers whenever he knew she was having a bad day. So on the day that their divorce was made official, he sent her this bouquet.

The note reads, "Always Gonna Be You."

[Tears diarrhea out of my face]

Lynn said that she immediately started crying when she saw the note. Which is, coincidentally, what everyone on Twitter went ahead and did:

Science says that if you are not crying you are, in clinical terms, a worthless piece of shit.

Clearly, Lynn is having a hard time with this, but she told BuzzFeed that she's felt really consoled by "the responses and the love in people's hearts."

Usually, I'd say that it's probably emotionally hectic and unhealthy to have the week your parents get divorced be the same week that you go viral on the internet. But in this case, I'm down.

Namely because she asked people to help cheer her up with pictures of dogs — which finally allowed the internet to discover its singular calling.

As BuzzFeed reports, over 200 pictures of dogs have been shared at the time of this writing.