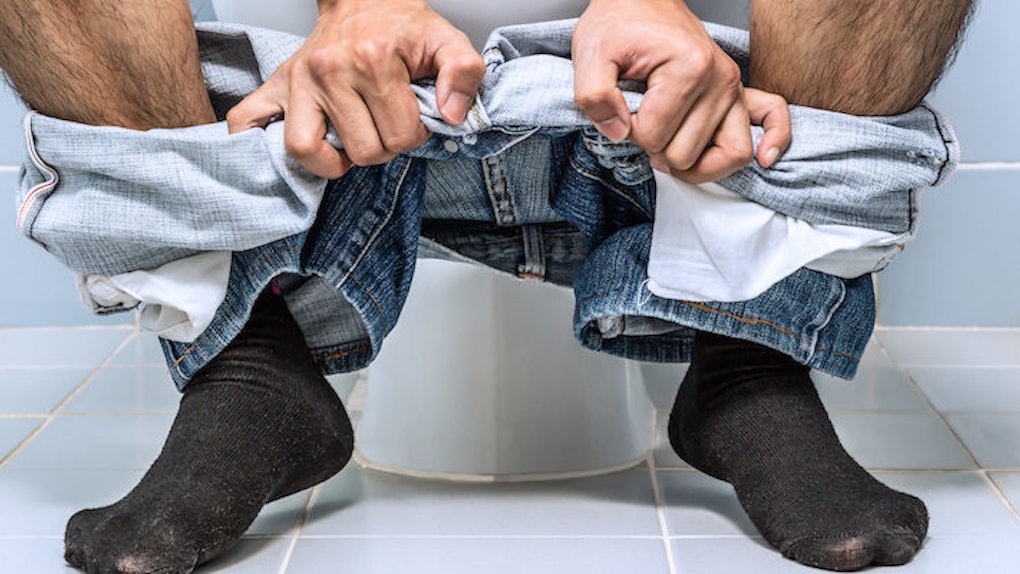 Hey all you lovely people. Are you having a pleasant day? Feeling pretty good? No real complaints?

Well, I'm about to thoroughly ruin all that for ya with the worst sex/poop story of all time.

Seriously, it's not just that this story is gross, because it is. I assume you like that sort of thing, because why else would you click on a story like this, you weirdo?

Nope, it's way worse than that. Reading this story from Reddit user nonononosh*tsh*tsh*t (a perfect username, thank you for making me type that) made me full-body cringe in secondhand embarrassment.

The idea that this poop-blow-job disaster could actually happen to people in real life — let alone ME — makes me want to hide in a cave and never interact with humankind again.

But the good news is, if you stick around, this whole thing has a weirdly cute ending.

Here is the most embarrassing situation I have ever been through and it happened this morning which is nice because it's the weekend and I can share it with you. There's a woman that I've been hanging out with a lot lately and apart from a cuddle and the occasional kiss here and there it has been very platonic thus far. I suppose her company is actually far more exciting than the prospect of anything sexual. I've never felt that way, and it's an incredibly nice feeling. I'm enjoying my newly single life after a long relationship so I wasn't really interested in pursuing a relationship, but this woman's slowly filling my brain with these confusing thoughts and I'm thinking that I may want to consider something more. It's important that you understand my thoughts over the last week - I really like her. Last night, I head over to hers and we drank a few bottles of wine and had a good laugh, one thing led to another and our platonic relationship turned sexual. So we finish up, lay there, cuddled and fell asleep. [Two] hours later, I'm awoken by a rumble in my tummy. I can tell it's going to be diarrhea, but she was laying on me and I was too embarrassed to wake her up only to bomb her toilet, so I decide to suck it up and hope that my body absorbs all that excess liquid in my poo by the time we actually wake up. So this morning, we wake up and laid there having a lovely conversation which lasted for an hour or two and through it all I can feel gas building up within me. I couldn't let it out. Not when this girl that I like so much is sharing this incredible moment with me. I persistently block any gas from escaping all while she's laying on my chest running her fingers over my body and moving down to my loins. Some mouth to rod business is conducted and as this is going on, I'm really trying hard to enjoy it because that pesky gas was becoming harder and harder to contain. Then she gets me to climax. That beautiful moment was accompanied by a sound.... a loud 'FFFWWWWIIIIIPPPP!' sound echoed in the room, almost as if a really bad trumpet player was in the room with us. Filled with embarrassment, i try to shift my body away, but as I did this, that trumpet player sound seemed to be interrupted by an angry mob flinging rotten fruit at him. The force of my flatus fired a spray of barely digested butt nuggets all over the bed and on this woman's chest. I'm laying there absolutely mortified, my eyes were bigger than Godzilla's balls and she is laying there beside my balls, gagging with my wasted seed and sh*t all over her. Anyway, we cleaned up the mess and she tried to make me feel really comfortable about the whole situation and kept me around for a few more hours, tried to feed me things for my upset tummy and told me all sorts of funny embarrassing stories of her own to make me feel better. I doubt you'd care about this bit, but I just thought it was really nice of her. I still cringe so much thinking about what happened, but on the plus side she seems like a keeper. TLDR: I got head and shat on the bed

So... yeah. I honestly have nothing more to say about this, because that would involve me thinking about it more. This is way worse than that woman who put the poop in her purse.

However, somehow, some way, this poop story gets even more incredible: This poop dude and his saint girlfriend are getting married.

A few days ago, on an update to his original post, the Reddit user announced the couple is getting married in June. He wrote,

Well, we've been together this whole time and many of you suggested that I marry her. So that's what's happening. In June. Besides the sh*t that went down on that fateful day, being around her has been an absolute blast and we haven't been happier.

Wow. This is not how I was expecting this story to end AT ALL. This got weirdly romantic?

Well, I'm very happy for you, poop guy! Maybe spare the grandkids this particular story, though.

Citations: Suffer With This Man as He Tells the Story of a Blow Job That Made Him Poop (Cosmopolitan)