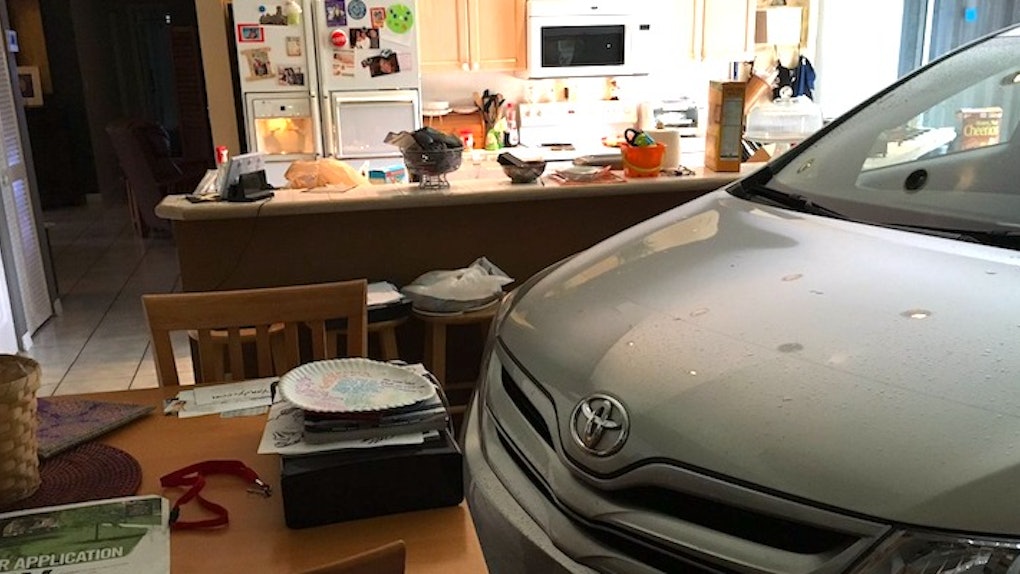 Hurricane Matthew Made A Family Park Car In Living Room

While some Florida residents like Vanilla Ice chose not to evacuate their homes before Hurricane Matthew came barreling into the state, others prepared to face the storm head-on in even crazier ways.

One family decided that, instead of evacuating and finding safety, they were going to ride the storm out.

Sure, that seems like the craziest thing you could do with a Category 4 hurricane approaching your city, but it's not.

Perhaps an even wilder thing to do when Governor Rick Scott is literally saying, "the storm has already killed people," is to hunker down in your house and PUT YOUR CAR IN YOUR LIVING ROOM.

No joke, one Florida family actually did this -- and shared the photos with us, the Internet.

To be quite honest with you, I'm not sure if we're deserving of photos this bizarre. When was the last time you witnessed a full-size Toyota sitting in someone's living room?

A Twitter user named Sofia tweeted out photos of the crazy sight.

While y'all were probably trying to get water or gas today, we put a car in my house. #HurricaneMatthew

Here are the photos.

HELLO. It's not every day that you put a car in a living room.

I'm jealous. I've always wanted to drive my car into my house.

Sofia wasn't the only one to share photos after her family literally drove their car into their living room to save it from being damaged by the category 4 storm, Hurricane Matthew.

It turns out that her neighbor knows how to take photos and tweet, too. What are the odds of that?! Twitter user Christian Cabrera posted a tweet about what was going down at Sofia's house.

My mom's co-worker decided to park her car in her living room for the hurricane. #HurricaneMatthew

As much as I want to say that Christian stole Sofia's shine, I don't want to start a neighbor war.

You guys already have enough to deal with in the Sunshine State!

So, what'd we learn today, friends?

If you get word that a nasty hurricane is coming your way, don't hesitate to literally save your car by driving it into your living room. This is officially "a thing," apparently.

Citations: Someone parked their car in the living room because of Hurricane Matthew (Mashable)