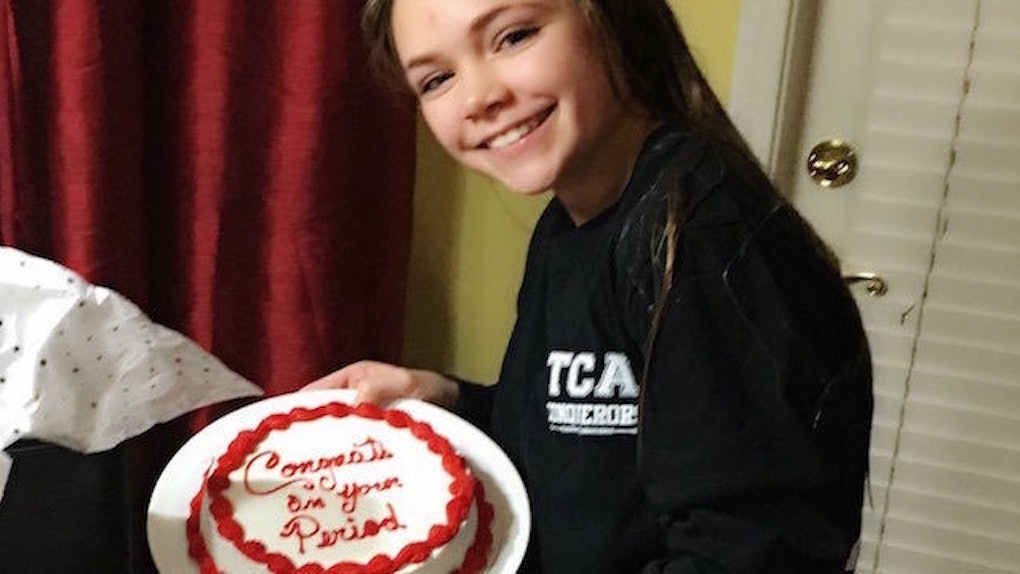 Mom Throws Daughter A Surprise Party For Getting Her Period

Moms love to celebrate all of their kids' achievements and milestones — whether it's proudly displaying your report card on the fridge, taking you out for ice cream after you score your first goal in a soccer game or, you know, throwing you a surprise party when you finally get your period.

Shelly Lee wanted to make sure her 12-year-old daughter, Brooke, wouldn't be one of the many young girls who feel ashamed or confused about bleeding downstairs for the first time.

So when Brooke got her period last week, Shelly Lee told BuzzFeed she wanted to do something that was a little more special than simply leaving a box of pads on the bathroom sink.

Shelly Lee decided to squash the stigma surrounding menstruation by gathering up the family and throwing Brooke a surprise party to commemorate her transition into womanhood.

The celebration included a chocolate cake that had "Congrats On Your Period" scrawled across it in blood-red frosting.

Apparently, Shelly Lee specifically picked a chocolate cake for the occasion since it has "serotonin in it to help her with her first period."

No party would be complete without presents, so Shelly Lee also gave her daughter a few boxes of menstrual products.

While most angsty pre-teens would probably be mortified at having a surprise period party, Brooke appears to be pretty damn excited about her mom's thoughtful gesture.

Brooke's cousin, Autumn, shared a few pictures from the period party on Twitter, and it didn't take before her post went viral.

Most people really likes the idea of this adorable celebration and applauded the family for being so supportive of Brooke.

Other's commented on the cake Shelly Lee bought for the surprise party...

...and said the blood-red frosting added the perfect touch to the party's theme.

However, one person noted Shelly Lee really dropped the ball.

Finally, a few Twitter users made a pretty valid point that Brooke probably won't be smiling once the reality of menstrual cramps sets in.

In an interview with BuzzFeed, Autumn revealed,

This is just a normal thing for our family to do. My tweet going viral just amazes me — I'm glad everyone was able to see how supportive and amazing my family is.

If only we could all have someone surprise us with cake and tampons every time Aunt Flo stopped by for her visit.

Citations: Mom Gloriously Celebrates Her Daughter's First Period by Throwing Her a Surprise Party (Cosmopolitan), A Mum Threw Her Teen Daughter A "Period Party" Because She Was Anxious About Starting Her Period (BuzzFeed News)