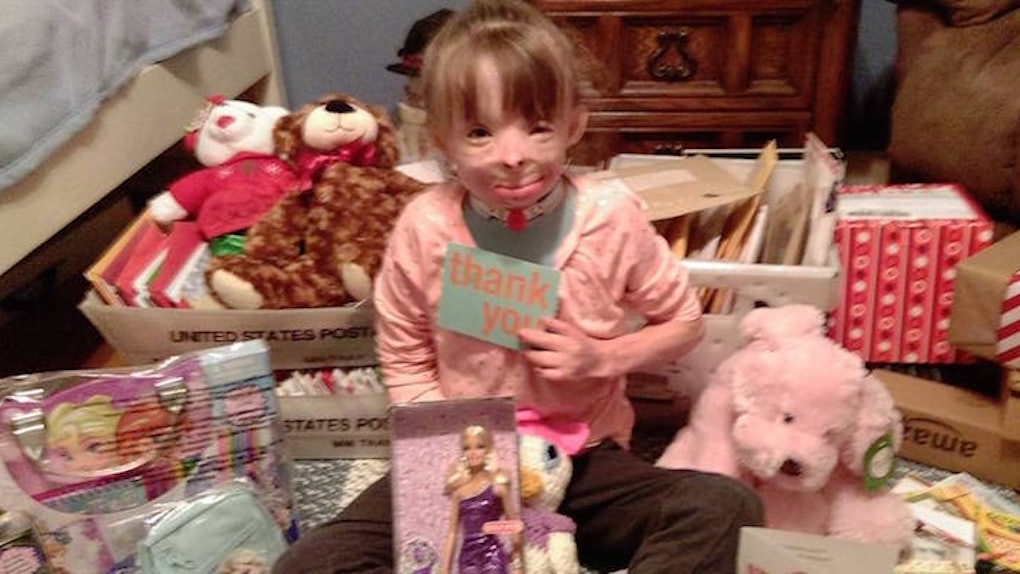 The Internet coming together for Safyre Terry will make you happy cry until December 25.

It's been a unimaginably difficult two years for the 8-year-old who survived an arson attack in 2013 that took the lives of her father and three siblings.

Safyre, who was found by firefighters clutched in the hands of her father in an attempt to shield her from the flames, sustained severe burns during the blaze that led her to need numerous surgeries, rebuilding her face, nose and mouth.

After the incident, she lost her foot and hand due to infection, and until January, she was not able to speak due to a problem with a tracheal tube.

Thanks to a viral Imgur post by her aunt and the kindness of strangers, Safyre is having an unforgettable Christmas, with a tree surrounded by thousands of cards from people hoping to send some holiday cheer to this remarkable girl at its center.

The family reportedly received around 18,000 cards and 400 packages by last Friday. She received so many, in fact, the postmaster general is going to probably need to deliver the next batch of mail to Safyre in a tractor-trailer this week.

A crowdfunding campaign on YouCaring.com with a goal of raising $15,000 has, thus far, raised over $330,000 to help cover medical expenses.

She's been through hell and back. But she's an amazing girl, just so full of life and love. We can't keep her to ourselves. We wanted to share with the world her message of faith, hope and love.

A video uploaded to Terry's Facebook page, boasting over 116,000 followers, shows the high-spirited girl in front of her Christmas tree thanking everyone who submitted gifts.

MANY MANY THANKS TO ALL OF YOU Posted by Safyre Schenectady's Super Survivor on Wednesday, December 9, 2015

There is still plenty of time before the holiday season, so get those gifts in!