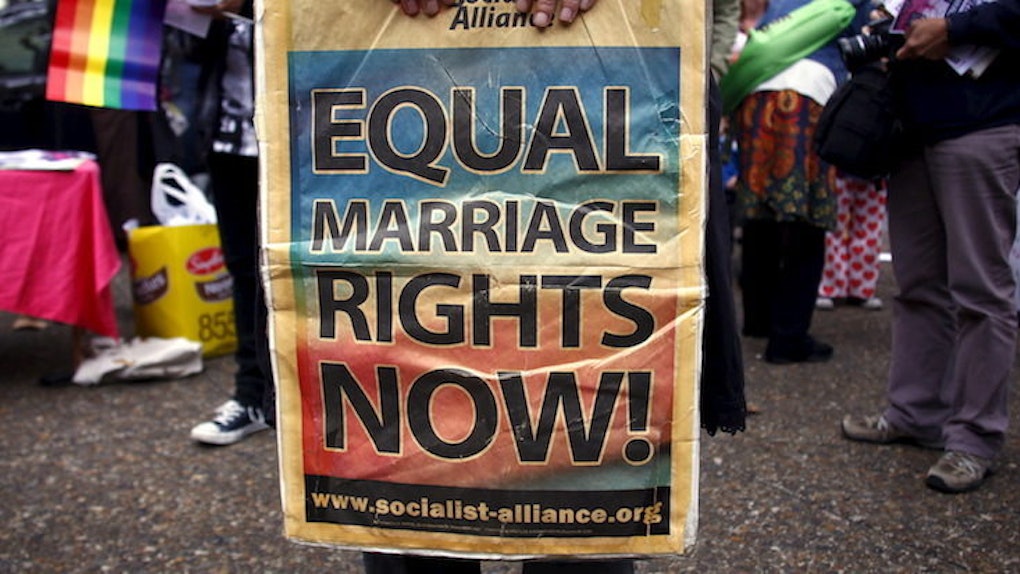 After A Cancer Diagnosis, Lesbian Couple Flies Across The World To Wed

Everyone deserves the right to celebrate their love for another person.

While I remain optimistic toward the stability of marriage equality in the United States, and my general rights as a gay man as President-Elect Donald Trump steps into office this January, others outside the US aren't even able to consider the concept of becoming man and man or woman and woman.

For lesbian couple Lynn MacLaren and Sarah Holt-Foreman, it was a bout of life-altering news that motivated the Western Australians to tie the knot once and for all.

Holt-Foreman had previously kicked breast cancer's ass and had been in remission for two years when she learned the disease had returned, and unfortunately, spread to her bones.

After her diagnosis, the two told Buzzfeed News they were dead-set on celebrating their love and devotion for one another someway, somehow.

“I felt like now is the time we must make the most of our lives together,” MacLaren told BuzzFeed News.

The couple has been together for seven years, and MacLaren has asked Holt-Foreman to marry her more than once. But she didn't say "yes" until now.

With Holy-Foreman's cancer treatment imminent, the two wanted to wed as soon as possible.

Same-sex marriage is illegal in Australia. So in just eight short days following MacLaren's proposal, the couple flew across the globe to none other than LGBTQ+ mecca, San Francisco, in order to be wed.

A few members of the couples' close-knit circle were present for the ceremony, but since they wanted to tie the knot ASAP, an elaborate ceremony wasn't really in the cards.

Ultimately, doing things in Australia would've just been so much easier.

I was unaware of Australia's law preventing same-sex marriage until now.

Even though I'm not fully up to speed on my knowledge of the "down under," it's still so odd to me that the marriage debate still rages on in a place I assumed shared similar values to the ones we have here in the US.

It makes me want to know more.

Aside from being a member of the LGBTQ+ community herself, MacLaren is an active Greens politician in the West Australian legislative council, adamant on making a change and legalizing same-sex marriage.

She's even used her voice in order to encourage a free vote, where legislators are capable of voting based off personal opinion or preference instead of their political party's agenda, on a marriage equality bill. This is the first time this will occur in Australia.

She hopes the instance of a free vote will bring out more support for same sex marriage and general LGBTQ+ issues.

She and Holt-Foreman continue to look ahead, in regards to both a hopeful recovery from her diagnosis, as well as a shift in Australia's democracy when it comes to rights of the LGBTQ+ community.

It's stories such as this one that should inform, inspire and show people love is love, no matter where you are in the world.

Citations: This Lesbian Couple Had To Marry Overseas After One Was Diagnosed With Cancer (Buzzfeed)