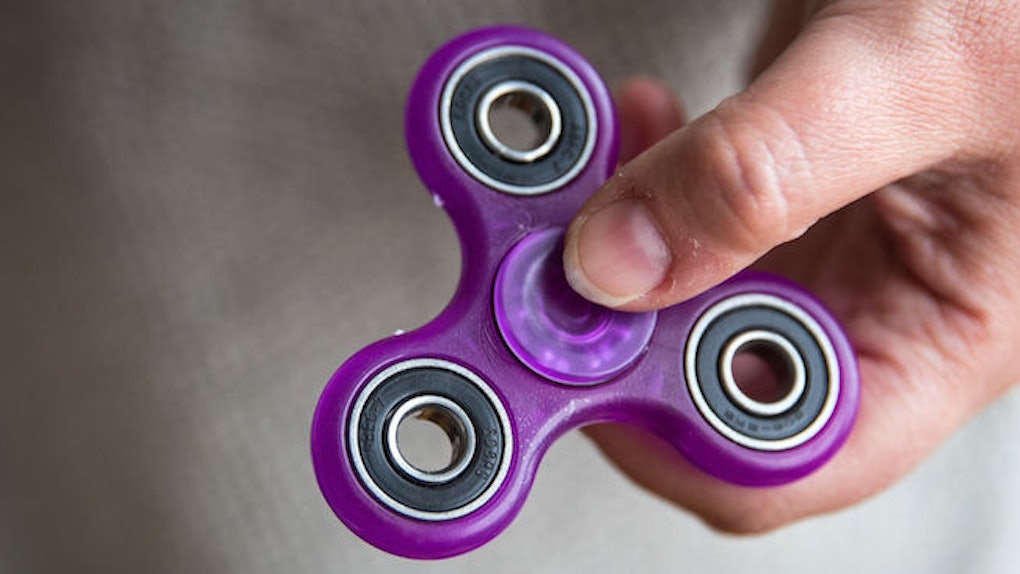 Fidget spinners are literally everywhere. Maybe you've heard of them?

I get it, though. It's hard to not obsess over the instant stress relief associated with a fidgety spin.

However, some concerned parents are calling out a major safety hazard: bluetooth fidget spinners can catch fire.

Two different moms in the U.S. have come forward with eerily similar scary tales of seeing their spinners ignite before their eyes.

Unlike your standard fidget spinner with zero frills beyond being amazing, bluetooth options come with battery-powered speakers that light up while simultaneously playing your music.

Once they're fully charged, you can use the speaker wirelessly.

It's a great idea, but both women say the flames started while their devices were plugged into the wall, charging.

Michigan-based Michelle Carr told WEYI that she found her fidget spinner burning on her counter.

"Right here in this book case, I could see the reflection," she said in an interview with the news station, recalling the scary incident.

According to Michelle, her fidget spinner didn't come with any charging instructions, so she plugged it in with her baby monitor cord.

Likewise, Kimberly Allums from Alabama told WBRC that her son is the one who noticed theirs was on fire after just 45 minutes on the charger. She said,

He noticed that it burst into flames and he just started screaming. I was downstairs and all I heard was 'fire..fire,' and the fidget spinner had literally, it was smoking, it was in flames.

It's like the flammable IKEA serving bowl drama all over again.

Kimberly said she feels lucky they were home to catch it early and extinguish the flames in the kitchen sink.

However, she's still warning against buying the product, which has no brand name and only says "Made in China" on the box.

I just really want people to be aware of this because a lot of people have been inboxing me reaching out to me leaving messages saying my child has this same fidget spinner. Anytime you have anything that needs to be charged, we really need to be paying attention to the manufactures of these, doing our research.

The Consumer Product Safety Commission is reportedly investigating the fire hazard. You can report a fidget spinner fire to SaferProducts.gov.