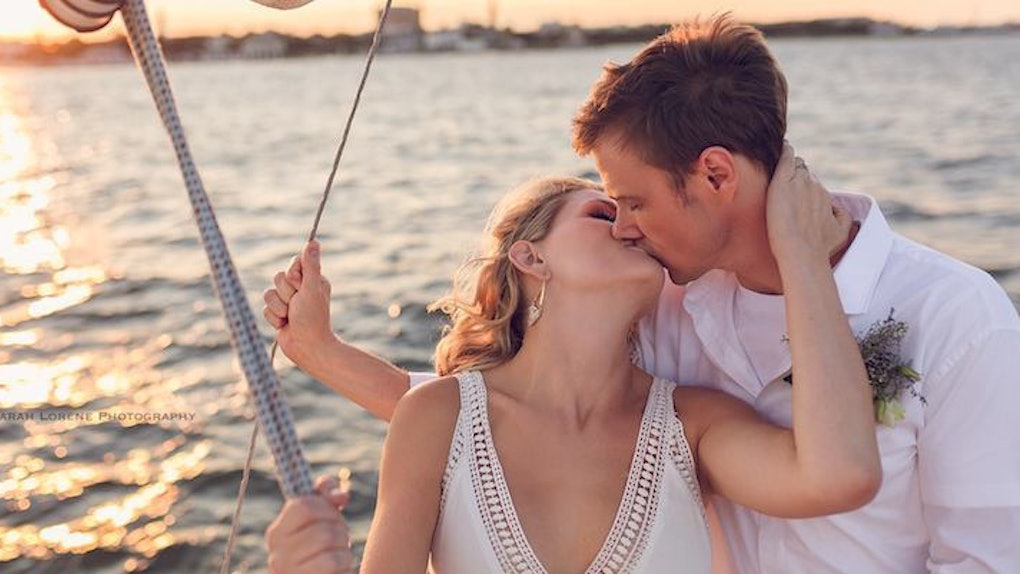 Either this woman is the most unlucky person of all time or God is doing everything in his or her power to let these two people know they should in no way be married.

Losing a wedding ring is the worst thing that can happen to a bride.

Twice (the ring thing, not the sorority girl thing).

Alena was in the process of marrying her new husband, Trent, when the mini-disaster happened.

We decided to elope very last minute after throwing this wedding together in about 11 days. We were on the bow of the boat. We arranged for a sailboat, the Alize, to take us out, to sail for about an hour and half and we'd anchor close to the Battery right at sunset to do the vows. It really was perfect and very romantic.

During the reception, Trent was taking out the ring pouch from his pocket with the intention of putting the band on Alena's finger when God and the elemental forces decided they didn't want that to happen.

Despite his best efforts, Trent couldn't find the ring in the water.

When he got back on the boat, the couple made the decision to carry on the wedding, despite being ringless, so the pair could at least get some photos while the boat was docked.

Trent changed into a dry shirt graciously provided to him by the boat's captain, and the couple finished up the ceremony before the sun went down.

The following Tuesday, I don't know happened. I was doing some crafts with my son, I had cleaned out the closet and the refrigerator, did about five loads of laundry, and then we played baseball in the fields and walked out dog that day.

Alena said the ring probably slipped off her finger because it was already big for her, and she recently lost some weight.

Despite the awful series of events, the couple is trying to remain optimistic about the situation.

This is one of those things where you could really let this bring you down, but it's just materialistic. We still have our marriage. We still have each other. It's a really perfect example of how things don't always go as expected, but it's up to you have the right attitude to get through it. We wouldn't change it because it's been such a great story and something so memorable. We've just been laughing about it, because what else can you do?

Trent probably isn't as lovey-dovey about the whole thing, though. He is reportedly out $5,000, and according to Alena, he said he does not plan on replacing the rings any time soon.