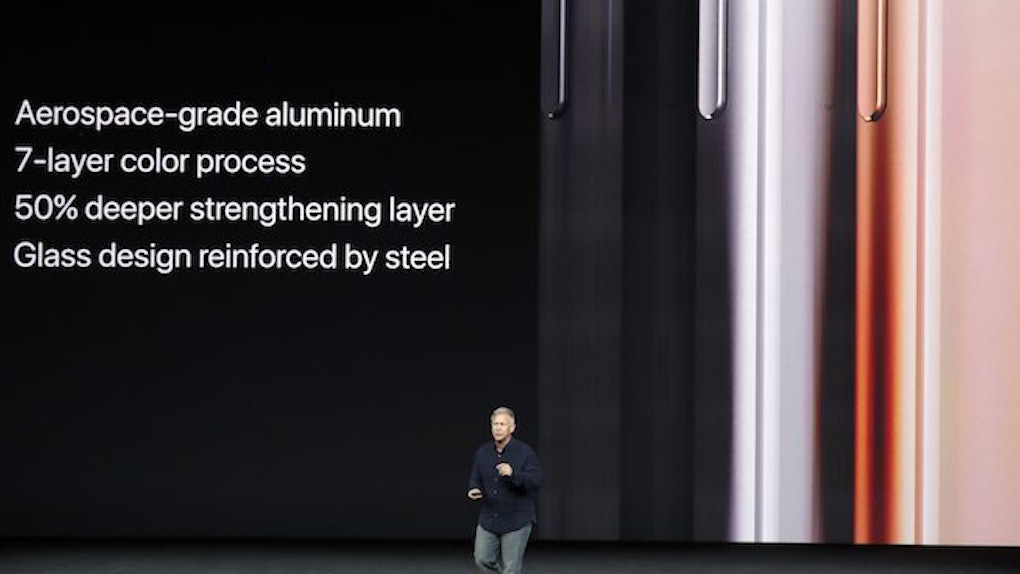 We're finally getting confirmation at everything that's coming with the release of the iPhone 8, and between the new features, the new look, and oh, basically everything about the phone, I could not be more stoked. But the thing I'm most relieved to finally find out? What colors the iPhone 8 comes in. The new release is going to be released in three colors: silver, gold, and space gray.

Apple announced the new iPhone 8, 8 Plus, and its anniversary edition the iPhone X (along with a whole bunch of other new tech), on Tuesday, Sept. 12 at its keynote event at the company's home base in Cupertino, California.

The new colors fly in the face of early rumors that the iPhone 8 would be introducing a new shade called "blush gold," which would offer a more copper-y version of the glittery color. And while the shade of gold revealed on Sept. 12 does look more coppery (at least in the photos) than the previously used shade of gold, it looks like it's unfortunately not quite a whole new color. However, one thing does seem to be true about those rumors. It seems like it's time — alas! —to say goodbye to our beloved rose gold, at least for now. We'll miss you, rosie.

If you're desperate to get that rose gold and hoping that the iPhone 8's sleeker cousin, the iPhone X, might have it, you're also out of luck. The iPhone X is going even more old school, and will only be available in space gray and silver.

On the upsides? The features.

The new iPhone 8 will have a bunch of awesome changes to make your selfies really shine. For one thing, the camera in the 8 Plus is going to be a dual camera, meaning that you can artificially add depth and lighting effects to your photos after taking them. Advancements to "portrait mode" (aka selfie mode) mean that the lighting in your pics will be way easier to adjust, and hopefully get rid of that weird grainy quality you see when there's low light.

The phones' new cameras and processors will also support "augmented reality," allowing for more fun tricks and manipulation of the real world through the camera lens. The iPhone 8 and 8 Plus will also have a six-core processor, which will make 3D games, apps, and photo tweaks run so much faster. So you can Snapchat your heart away, safe and secure in the knowledge that your phone will neither freeze, crash, or refuse to load your texts.

Also a fun change? The iPhone 8 will finally be getting wireless charging.

The glass back of the new phone will allow for the iPhone 8 and 8 Plus to be charged using a charging pad rather than a cord, much like the Apple Watch. Which is great and futuristic and all, but also makes me feel like that's just one more way to misplace your phone if you don't have to kind of literally tie it down. Also, I can guarantee you that at least once a week I would accidentally knock my phone off the charge pad and wake up with a dead battery. So I have some mixed feelings about that one.

So, when can I get my hands on it?

Will we be able to make it? Deep breaths, guys. At least now we know what we're getting.