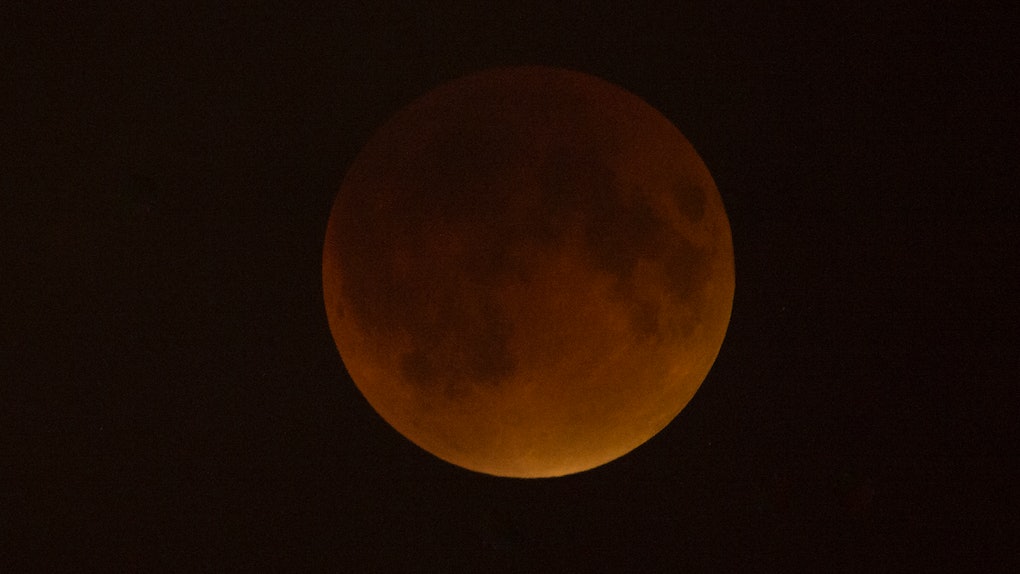 If you haven't heard, there is a massive full moon lunar eclipse occurring on Jan. 31, 2018. This lunar event is also being referred to as the "Super Blood Moon," which is a good way to terrify any woman with a menstrual cycle that syncs up with the full moon. The sinister name, however, doesn't match up with what the stars have in store for us, so read on to find out just how good your super blood moon horoscope will be.

But where does this astrological event get its name, and what is a super moon, anyway? The name blood moon comes from the color the moon takes on when it falls behind Earth's shadow, and the term supermoon was actually coined by an astrologer in the 1970s. It's not an astronomical term, but it refers loosely to when the moon is closest to Earth in its orbit, appearing bigger and brighter in the sky.

Astrologically speaking, this blood moon is connected to the new moon that followed the solar eclipse in August of 2017. The goals, concerns, and actions we took (or were thinking of taking) during that new moon will come to fruition at the full moon on Jan. 31 2018, because the lunar calendar works on a six-month cycle. Goals set on the new moon will come full circle on the full moon six months later. Here's what to expect during this year's super blue blood moon.

Full Moon In Leo: "Lights Up"

It's particularly fitting that for the sign of the stage-queen, Leo, there would be a super moon. Leo is about stepping into the spotlight and claiming your power, just like the moon is doing this month. Full moon eclipses illuminate everything that has culminated over the last six months, so you can expect a break through of some kind to radically change the course of your life. What themes are coming up for you as you think back to August of 2017? What are you ready to let go of, to walk away from, and what are you taking dramatic steps toward, in your decision to let go?

All Planets In Direct Motion: "All Systems Go."

If all this scares you, consider how supported you are at this time more than any other. The planetary lineup of Jan. 31, 2018 indicates that not ONE planet will be in retrograde motion.

What this means is that everything is running smoothly. The stars are working together like a finely tuned machine, and the efforts you make now will seem somehow easier. The courage to take bold steps in a new direction will somehow just be there, within you; you might even find yourself wondering, where was this courage before? The themes you were ruminating over in August of 2017 will reemerge now in a major way.

An "opposition" is one of the strongest aspects in astrology, after what's known as a conjunction. Aspects are used to describe the angle between planets on the zodiac chart, and the energy between those planets. An opposition, as the name implies, refers to two planets in opposite signs from one another. So when the full moon is in Leo on Jan. 31, 2018, Venus will be in Aquarius.

An opposition makes for an energy where one planets themes are sacrificed, or put on the back burner, for another planet. Since the moon will be closest to the earth and Venus will be as far away as it can get in orbit, it's likely that the moon's themes will be more powerful.

What this means is that the moon (which represents our longing) in Leo (to express ourselves, powerfully) will take some precedence over Venus (our affection) in Aquarius (for the collective, group, or organizations we serve).